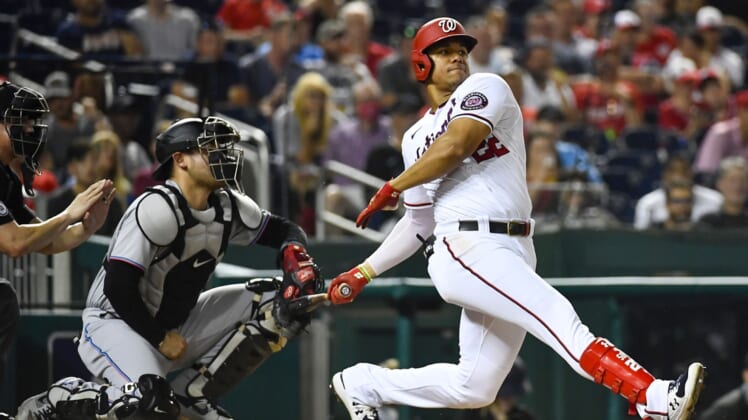 Ryan Zimmerman homered to lead a 14-hit attack as the Washington Nationals defeated the visiting Miami Marlins 8-2 on Tuesday night.

Nationals starter Erick Fedde (7-9) gave up a run on three hits over five innings, striking out eight without a walk. He earned his first win in four outings since beating the Marlins on Aug. 24.

Keibert Ruiz and Juan Soto had three hits each while Lane Thomas had two hits and scored twice for Washington.

Marlins starter Jesus Luzardo (5-8) lasted 4 1/3 innings and was charged with four runs on seven hits. He walked two and fanned one.

Washington didn’t get its first hit until the seventh inning on Monday night against Miami’s Sandy Alcantara. On Tuesday, Zimmerman gave the Nationals a 1-0 lead in the second inning when he hammered a 3-1 sinker into the upper deck in right-center for his 14th home run of the season.

In the third, Thomas doubled with one out. With two outs, Soto hit a broken-bat single to right, and Jesus Sanchez’s throw home was high as Thomas scored.

The Marlins had one hit off Fedde entering the fifth, when Diaz led off with a homer to right-center on a 3-2 pitch to pull Miami within 2-1. Isan Diaz singled with one out, and third baseman Carter Kieboom’s error put runners on first and third with two outs, but Fedde retired Jazz Chisholm Jr. on a fly ball to center.

The Nationals chased Luzardo in the bottom of the fifth. Pinch hitter Andrew Stevenson singled with one out. After Thomas singled, Alcides Escobar doubled into the left field corner, scoring Stevenson. Soto was intentionally walked and Steven Okert replaced Luzardo. Bell walked, forcing in a run to make it 4-1 before Zimmerman grounded into a double play.

Diaz, leading off the seventh against Andres Machado, homered into the upper deck in right-center, his fifth of the season.

The Nationals got that run back and more in the eighth. Jordy Mercer and Thomas followed three singles with consecutive walks to make it 6-2. Escobar’s sacrifice fly brought home the seventh run, and Soto’s single made it 8-2.