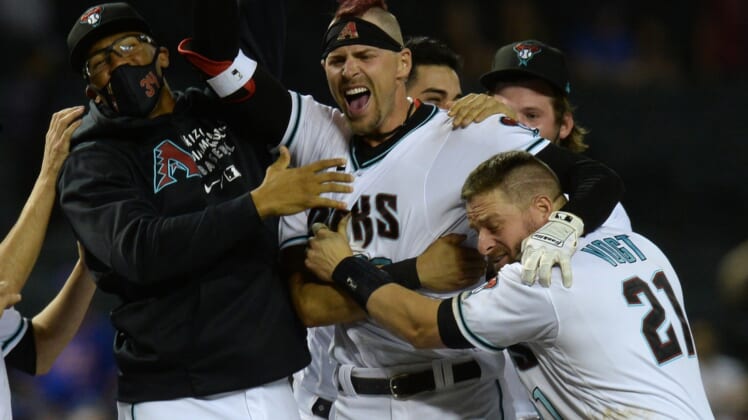 Josh Reddick’s two-run double in the bottom of the 10th that barely touched the right field line gave the Arizona Diamondbacks a 6-5 win Tuesday over the New York Mets at Phoenix.

Reddick’s hit off a slider from Trevor May (2-2) was reviewed by the umpires and the fair-ball rule stood.

Ghost runner Eduardo Escobar and Pavin Smith, who walked, scored on the hit. The ball eluded right fielder Brandon Drury in the corner, enabling Smith to score from first.

Pinch-hitter James McCann’s double in the top of the 10th inning against Alex Young (2-4) scored ghost runner Jose Peraza to give the Mets a 5-4 lead.

Arizona, which has lost 14 of its last 16 games, rallied for a run in the bottom of the ninth to force extra innings.

Hard-throwing right-hander Edwin Diaz, whose fastball was clocked at above 100 mph, blew the save opportunity for the Mets in the ninth after allowing Nick Ahmed to hit a single with one out. Ahmed advanced to second on a fielding error by right fielder Billy McKinney.

After Leyba grounded out to move Ahmed to third base, Josh Rojas singled to score him and tie the game at 4.

Ketel Marte then singled, advancing Rojas to second, but the threat ended with Eduardo Escobar flying out to center field.

Dominic Smith’s third home run of the season and Marcus Stroman striking out six and walking none in his six innings helped the Mets take a four-run advantage.

Stroman gave up a three-run home run to Pavin Smith in the sixth inning that cut the lead to 4-3.

The home run by Pavin Smith, who extended his hitting streak to 12 games, traveled 435 feet and reached the concourse level beyond right field.

The hit scored Marte and Escobar, both whom opened the inning with a single.