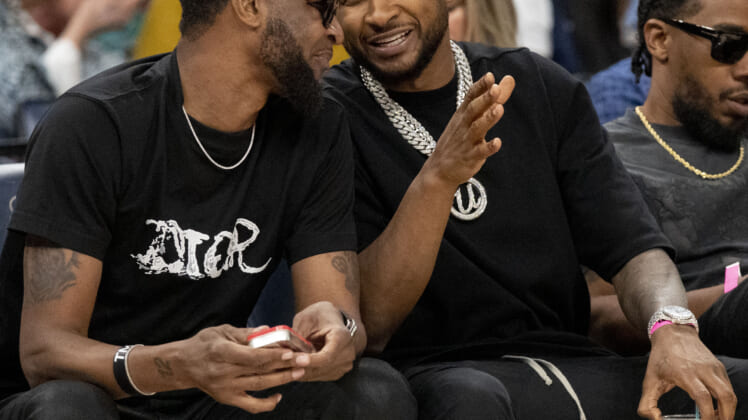 It seems that the father of Memphis Grizzlies star Ja Morant and R&B legend Usher bare a striking resemblance when you throw a pair of sunglasses on them.

Morant and his father Tee had a very good night on Tuesday. The elder Morant got to sit front row to watch his son light up the Minnesota Timberwolves in the fourth quarter of a hugely important Game 5 matchup. The third-year veteran and first-time NBA All-Star had a big finish and game-sealing basket in the Grizzlies’ 111-109 win inside the FedEx Forum. The victory now gives Memphis a 3-2 lead in their first-round best of seven series.

It was surely a night to remember for the proud papa, yet that wasn’t the only highlight for the NBA star’s parent. In attendance for the playoff game, and sitting right next to Tee Morant, was beloved singer Usher. And the man that has sold more than 23 million records during his decades-long career had a fun moment with Tee Morant.

During a pause in the action, the folks running the Grizzlies jumbotrons had some fun with the crowd using their “Look-Alike Cam.” As they showed pictures of celebrities or famous characters and then their look-alikes in the audience. Towards the end, they posted a picture of Usher and a live video of Morant. The moment got a decent reaction until they panned out to a shot of the two actually sitting next to each other. That had the Grizzlies faithful entertained because they did look pretty similar to one another.

Later during the TNT broadcast of the game, the network showed the same shot of the two men as they realized the whole arena was looking at them. What makes it all great is the fact that they looked at each other at the same time and almost had similar reactions to the moment. The TNT team added to the fun by posting a graphic of their names with question marks underneath each man in the shot.

With their sunglasses off the similarities do disappear, but if Usher is ever looking for a stand-in at an autograph signing in a slightly dim room, Tee Morant may be the perfect replacement for the music star.