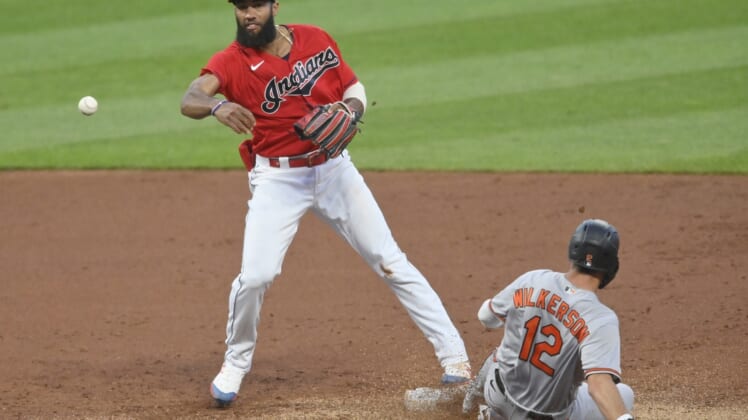 Cesar Hernandez scored two runs and four Cleveland relievers combined to allow one hit and one run while striking out eight over five innings. Emmanuel Clase retired the side in order for his 10th save as the Indians won for the fifth time in their past six home games.

Baltimore fought back from a 3-0 hole and had a runner on second with no outs trailing by a run in the eighth, but Cleveland’s James Karinchak fanned the next three batters. The Orioles have dropped five in a row overall and remain winless on the road since John Means’ no-hitter at Seattle on May 5.

The Indians wasted no time getting to Baltimore’s Dean Kremer (0-6), who was recalled from Triple-A Norfolk earlier in the day. Hernandez led off the first with a single, and Amed Rosario was then hit by a pitch resulted in Orioles manager Brandon Hyde getting ejected from the game for arguing the call.

After a wild pitch, Hernandez scored on Ramirez’s single as Baltimore left fielder DJ Stewart fell trying to reach the ball. Eddie Rosario’s sacrifice fly made it 2-0, and Bobby Bradley followed with an RBI single.

Baltimore got two runs back in the fourth. Trey Mancini walked to open the frame and Anthony Santander doubled. The runners scored on consecutive RBI groundouts by Stewart and Freddy Galvis to make it a 3-2 game.

Both runs came off Cleveland starter Jean Carlos Mejia, who also yielded four hits while striking out three with a walk over four innings. Kremer, meanwhile, settled down after the rocky first and completed 5 1/3 innings while allowing four runs (three earned) and four hits with two strikeouts and no walks.

The Indians’ unearned run came in the sixth after Hernandez reached on first baseman Ryan Mountcastle’s error. Hernandez scored on Ramirez’s double to right off Tyler Wells to give Cleveland a 4-2 edge.

Maikel Franco’s pinch-hit, RBI single in the seventh for the Orioles once again made it a one-run contest.

The start of the game was delayed 56 minutes due to rain.