Immanuel Quickley scored 16 points off the bench and hit all four of his 3-point attempts Monday night — including the go-ahead 3-pointer with 5:03 left — for the host New York Knicks, who struggled again in the third quarter before overcoming a 12-point deficit to beat the Indiana Pacers, 92-84.

The win was the second in five games for the Knicks, who were outscored 123-77 in the third quarter of their previous four contests and absorbed a 13-0 run by the Pacers before beginning to inch back Monday night.

Malcolm Brogdon scored 22 points and Domantas Sabonis had 21 points for the Pacers, who went ice cold in the fourth quarter as their two-game winning streak was snapped.

Indiana was 2-for-21 from the field in the fourth and missed its final 13 attempts.

Neither team led by more than five points until Brogdon’s 3-pointer began a 13-0 run early in the third quarter that lasted 2:35 and gave the Pacers a 64-52 lead. Indiana led twice more by 12 points before the Knicks began their comeback and pulled within 74-69 on Alec Burks’ 3-pointer with 46 seconds remaining in the third. 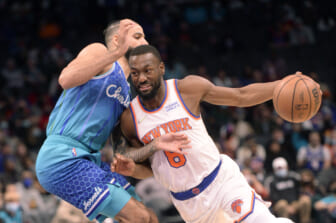 Neither team found a flow in the fourth quarter, when the Pacers missed their first four shots and committed a turnover while the Knicks went 2-for-6 with a turnover, yet tied the score on five points by Quickley over a span of 2:31.

The Pacers took an 80-79 lead on their final field goal, a layup by Brogdon with 7:06 left. LeVert hit two free throws and Barrett split a pair before Quickley put the Knicks ahead for good. New York took an 89-84 lead on an off-balance floater by Rose with 57 seconds left.

After Brogdon and Myles Turner missed 3-pointers for Indiana, Barrett drained a 3-pointer to deliver the dagger with 19.8 seconds left.