Mark Stone scored twice, including an empty-netter with 59 seconds remaining, as the Vegas Golden Knights rallied to defeat the Minnesota Wild 5-2 on Thursday night in Game 3 of their first-round playoff series in St. Paul, Minn.

Ryan Hartman and Joel Eriksson Ek scored for Minnesota and Cam Talbot stopped 35 of 39 shots. The Wild dropped to 6-1-2 all-time at home against the Golden Knights.

Smith scored what proved to be the winner at 17:33 of the second, breaking a 2-2 tie. Defenseman Nick Holden’s shot from the top of the left faceoff circle glanced off the helmet of Minnesota’s Jonas Brodin and the puck fell to Smith at the top of the crease. His backhander was stopped by Talbot, but the rebound came to Smith’s forehand and he didn’t miss.

Trailing 2-0, the Golden Knights seized control midway through the second period — in which they outshot Minnesota 22-5.

Stone got them on the scoreboard at 8:39 of the second, burying a shot from the slot after taking a pass from Chandler Stephenson. 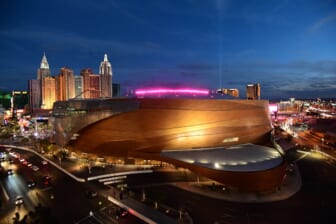 The Golden Knights tied the score at 15:19. Holden, his path to the net blocked, purposely put his shot from the left point wide of the goal. The puck caromed off the end boards and right in front of the net, where Brown collected it and scored on a backhander.

Hartman opened the scoring just 2:16 in, taking a cross-ice pass from Kirill Kaprizov near the far post and putting a one-timer past Fleury.

Eriksson Ek made it 2-0 at 8:30, finding a loose puck after a shot from the right point was knocked down and putting a forehander inside the left post.