Over the course of the past two seasons, the NBA has seen a major downtick in revenue due to the COVID-19 pandemic. Once the 2019-20 season was suspended in March and picked up during the summer in Orlando’s bubble, it was known that league-wide revenue would take a hit.

Just recently, fans returned to arenas — albeit on a limited basis — as more Americans are getting vaccinated from the virus. That should help some. However, the 2020-21 NBA regular season was defined by largely empty venues and a decline in TV ratings.

What does this all mean? Commissioner Adam Silver and Co. are looking for ways to add more revenue to the mix moving forward. According to Michael Grange of Sportsnet, that could include adding a 31st team to the Association. Grange specifically points to Seattle and Las Vegas as options to host an expansion team.

“It’s widely believed the NBA will expand for the first time since rounding out to 30 teams in 2004 partly to recoup losses from the pandemic,” Grange reported. “Returning to Seattle as part of the process is almost a given (with Las Vegas as the other likely city) now that the arena issues that led to the Supersonics leaving for Oklahoma City in 2008 have been resolved.”

The most-recent NBA expansion was back in 2004 when the then-Charlotte Bobcats (Hornets) joined the league. Prior to that, the then-Vancouver Grizzlies and Toronto Raptors were the most-recent expansion teams all the way back in 1995. In fact, the NBA has only expanded four times over the past 41 years.

With that said, both Seattle and Las Vegas make sense as potential host cities for an expansion team.

When the Seattle Supersonics left the Pacific Northwest for Oklahoma City and rebranded as the Thunder back in 2008, there was a lot of pushback around the Association. Primarily, the issue was the Sonics not being able to land a new arena. It has the market and interest to provide what the NBA is looking for. The arena issue has been settled.

Former CEO of Maple Leaf Sports & Entertainment, Timothy J. Leiweke, helped land Seattle the NHL’s newest expansion team with the Kraken slated to start play next season. His father is a co-owner of the ice hockey franchise. That could, too, play a role.

It’s no surprise that local leaders within the sprawling desert metropolis have been looking at the possibility of adding an NBA team. The NHL’s Las Vegas Golden Knights have been a tremendous success since starting play back in 2017-18.

It was just this past season that the Raiders played their inaugural campaign in Las Vegas after relocating from Oakland. Meanwhile, MLB’s Oakland Athletics are seriously considering a move to Southern Nevada. 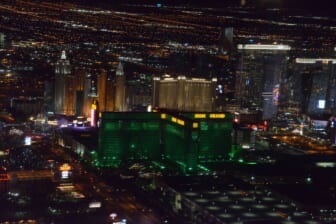 Back in 2020, former MGM Resorts International CEO Jim Murren indicated that an NBA team will likely be in Vegas some time over the short-term future. Unlike Seattle, an expansion team heading to Sin City could be expedited due to the presence of T-Mobile Arena on the strip. It’s the current home of the Knights.

Either way, this is something to keep an eye on. The NBA is likely looking at adding just one expansion team within the next few years. Right now, it appears to be between Las Vegas and Seattle. Both have great cases to become the latest host city around the Association.