Hathaway gave Washington a 1-0 lead at 16:30, then added an empty-net goal at 18:42. All five of Hathaway’s goals have come in his past four games.

Ilya Samsonov made 34 saves to earn his second shutout of the season for the Capitals, who are 5-0-1 in their past six games. John Carlson had two assists for Washington, which was playing the second of back-to-back games after an overtime loss at Anaheim on Tuesday.

Jonathan Quick made 36 saves for the Kings, who saw their eight-game point streak (7-0-1) end as they opened a seven-game homestand.

The Capitals went 0-for-2 on the power play and the Kings were 0-for-1.

After a slow start, the offensive pace picked up late in the second period, Samsonov made a series of sharp saves against Trevor Moore and Matt Roy around the 16:00 mark.

Quick responded with a pad save on Conor Sheary’s tip-in attempt around the 18:00 mark that kept the game tied through two periods.

Early in the third period, Samsonov made a great sliding pad save to stop Adrian Kempe on a two-on-one. Several minutes later, Kings defenseman Tobias Bjornfot lunged and got his stick in front of Aliaksei Protas’ wrap-around attempt.

The Capitals took a 1-0 lead when Evgeny Kuznetsov passed across ice out to Carlson entering the zone. Carlson fed back across to Hathaway at the post to the right of Quick for the tip-in. Kuznetsov has eight assists in his past six games.

Samsonov then made back-to-back saves on Kale Clague and Arthur Kaliyev just inside the 17:00 mark.

Quick went to the bench with about 1:55 remaining, but the Kings were unable to get the equalizer and Hathaway scored into the empty net. 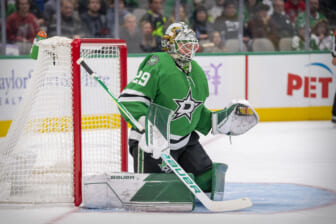