Ola Kamara scored on a penalty kick after a VAR review in the 44th minute and visiting D.C. United earned a 1-1 draw with the struggling New York Red Bulls Saturday night at Red Bull Arena in Harrison, N.J.

D.C. (9-10-4, 31 points) moved one point ahead of Atlanta for the final playoff spot in the Eastern Conference thanks to Kamara’s 13th goal.

Kamara tied the game after the review granted him a penalty kick. New York defender Sean Nealis was called for a hand ball on the review and Kamara easily scored the fifth time via penalty kick this season.

He faked out New York goaltender Carlos Coronel, who dove to his left. When Coronel moved, Kamara whipped a right-footed shot into the bottom left corner of the net.

Dru Yearwood scored in the fifth minute and that marked New York’s quickest goal of the season. The Red Bulls mustered three shots on goal but fell eight points out of the final playoff spot and were held to one goal or fewer for the sixth straight match.

The Red Bulls went ahead early when Patryk Klimala knocked the ball away from United defender Donovan Pines at the sideline. He moved the ball to Yearwood, who unleashed a right-footed shot from well outside the box into the bottom left corner.

D.C. goalkeeper Jon Kempin finished with two saves while Coronel made one stop.

The United had a golden opportunity to take a 2-1 lead in the 80th minute but Yordy Reyna’s diving header from the left side of the box sailed high. Two minutes later, Fabio flubbed a right-footed shot from the center of the box that would have given the Red Bulls a one-goal advantage. 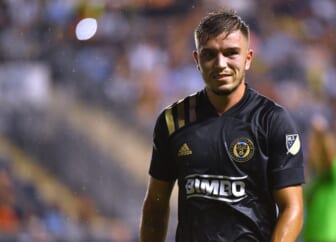