D.C. United rallied to end a three-game losing streak with a 3-1 win against the visiting Philadelphia Union on Saturday.

The Union (8-6-8, 32 points) lost for the second time in their past four games and are winless on the road in eight straight (0-4-4). It’s the first time they’ve lost consecutive road matches since dropping three straight from September 2019 to February 2020.

D.C. was in control from the get-go.

It began with a chance from Yordy Reyna a mere 18 seconds in that went over the bar. In the sixth minute, Julian Gressel set up Edison Flores for a strike that rolled left of the net.

United thought they had the opening tally in the 13th minute on a Gressel feed to Antonio Alfaro but Gressel was ruled offside.

Two minutes later, Union goalkeeper Andre Blake denied the home side of the first goal with a diving save to the right on a Gressel attempt. Blake followed it up with a short side save along the post on Andy Najar.

Philadelphia took a 1-0 lead on a favorable bounce in the 22nd minute when Alejandro Bedoya’s cross deflected off D.C. defender Steven Birnbaum and into the net. 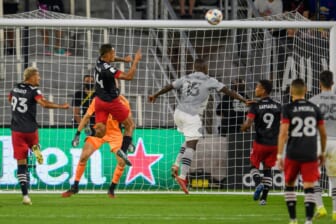 Blake kept his team on top with another diving save, this time to the left, on Reyna.

Ola Kamara tied it 1-1 in the 36th minute with his 12th of the season on a penalty kick. United was awarded the kick after Union defender Alvas Powell’s sliding tackle in the box took down Reyna.

D.C. went ahead 2-1 in the 50th minute. Blake made the initial save on Kamara’s header off a Gressel cross and Reyna knocked in the rebound.

Ramon Abila sealed it with a shot from the right side of the goalmouth in the fifth minute of second-half stoppage time to make it 3-1.