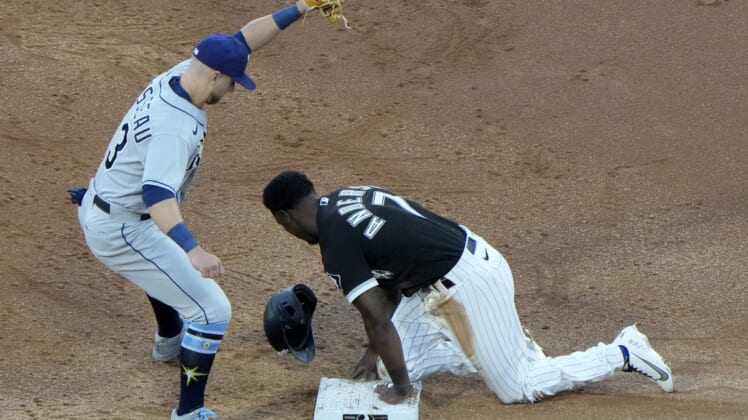 Danny Mendick had a two-run single and Adam Engel homered to back seven shutout innings from Dallas Keuchel and lift the host Chicago White Sox to a 3-0 victory against the Tampa Bay Rays on Tuesday night.

Chicago won for the seventh time in nine games to even the series between the American League division leaders at one game apiece. The rubber match is set for Wednesday afternoon.

After stranding four runners in the first three innings, the White Sox broke through for a pair of runs in the fourth, as Mendick grounded a two-run single to left field against Rays starter Shane McClanahan (2-2).

Engel, who missed the first two-plus months of the season while recovering from a right hamstring strain, added to the advantage by drilling a solo home run to left center on the first pitch of the fifth. Engel has hit safely in four straight games after going hitless in his first five at-bats following his return to the lineup June 6.

The support proved more than enough for Keuchel (6-1), as he spaced four hits with one walk and five strikeouts. The left-hander, who entered the game at 1-5 with a 4.78 ERA in eight career starts against the Rays, threw 64 of his 102 pitches for strikes.

Austin Meadows’ first-inning double was the only extra-base hit Kuechel allowed. Randy Arozarena extended his hitting streak to 10 games with a sixth-inning single.

Yandy Diaz had two hits for the Rays

McClanahan scattered three runs — two earned — and seven hits in five innings with one walk and four strikeouts. He had not pitched past 3 1/3 innings since May 27.

Chicago’s bullpen helped the lead stand up. Aaron Bummer worked around a leadoff walk in the eighth before Liam Hendriks pitched a scoreless ninth to record his 18th save. After allowing consecutive one-out singles to Diaz and Ji-Man Choi, Hendriks recovered to strike out the final two Rays to end the game.