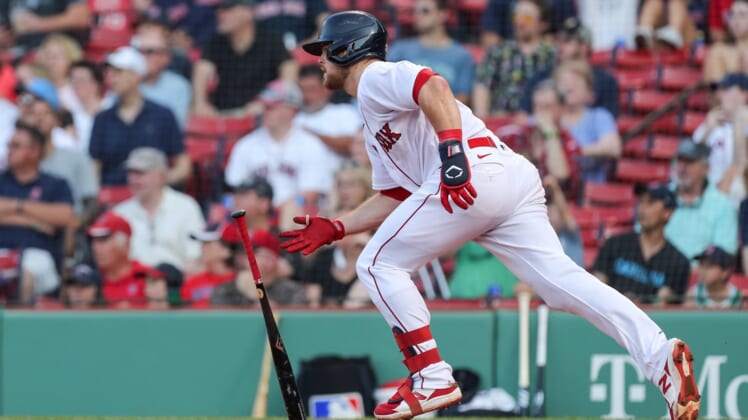 Miami, which lost for the ninth time in 10 games, stranded 14 runners, including at least two in six different innings. The Marlins, who left the bases loaded in the sixth, went 3-for-16 with runners in scoring position.

The Red Sox won their fifth consecutive game, thanks largely to the top three hitters in the batting order. Arroyo, Alex Verdugo and Xander Bogaerts combined for six of Boston’s 10 hits.

The Monday contest made up a game rained out in Boston on May 30. The Red Sox beat the Marlins on May 28 and May 29 to open what was scheduled to be a three-game series.

Right-hander Nick Pivetta, who is 8-1 since Boston acquired him last August, fell one out short of qualifying for a victory Monday. Laboring with a high pitch count, he allowed seven hits, three walks and two runs while striking out six in 4 2/3 innings. He threw 54 of his 92 pitches for strikes.

Five Red Sox relievers combined to hold Miami to one run over 4 1/3 innings. Hirokazu Sawamura (2-0) earned the win by throwing 1 1/3 scoreless frames. Adam Ottavino got the final four outs for his third save of the season.

Miami’s Zach Thompson, a 27-year-old right-hander making his major league debut, started and took the loss. He allowed two runs on four hits in three innings. Thompson (0-1) struck out one and walked one.

The Marlins were led by Starling Marte, who went 3-for-4 with a home run.

The Red Sox played their third consecutive game without outfielder J.D. Martinez, who has a wrist injury.

Miami got back first baseman Garrett Cooper, who had missed two games in a row due to back stiffness. He went 0-for-4 with a walk.

Boston opened the scoring in the first inning. With no one on and two outs, Bogaerts singled, advanced to third on Rafael Devers’ single and scored on Thompson’s wild pitch.

The Red Sox made it 2-0 in the third on consecutive doubles by Arroyo and Verdugo.

Miami cut the deficit to 2-1 in the fourth. Adam Duvall doubled, stole third base and scored on Jorge Alfaro’s RBI single.

Boston extended its lead to 5-1 in the bottom of the fourth as Arroyo hit a two-run single and Verdugo added an RBI single.

Miami scored in the fifth on Marte’s solo homer to center and in the ninth on Isan Diaz’s two-out RBI double on an 0-2 slider. However, Ottavino got Alfaro — who represented the potential go-ahead run — to ground out to end the game.