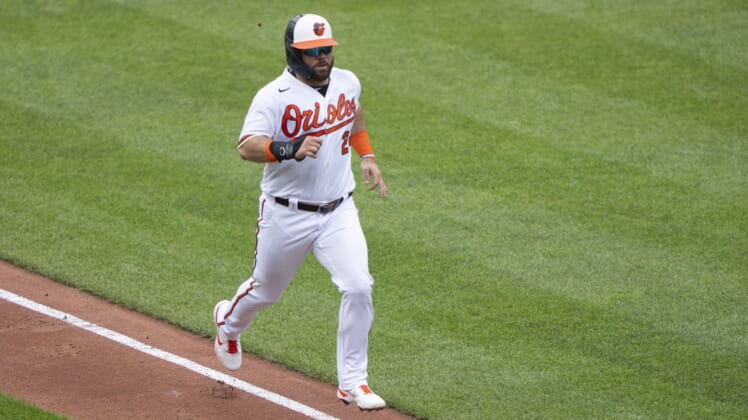 Cedric Mullins homered to start the first inning and went 3-for-4 on the day as the Baltimore Orioles banged out 21 hits Sunday en route to an 18-5 victory over the visiting Cleveland Indians.

Mullins reached base five times for the second straight game and drove in two along with scoring two runs. Before lining out in the eighth, Mullins had nine hits in a row, one short of Ken Singleton’s team record.

Mullins went 1-for-3 in Friday’s win and 5-for-5 Saturday, finishing the series 9 for 12 as the Orioles won their second consecutive series at home.

The Orioles, who have won four of their last five after a 14-game losing streak, scored six times in the second inning, five in the fourth, and five more in the seventh. It’s the most runs they have scored in a game since August, 2015.

Jorge Lopez (2-6) picked up his first win in more than a month, giving up three runs on four hits in five innings. He had not won in his last eight starts despite pitching better recently.

After Mullins homered for a 1-0 lead in the first, it was a Quantrill error that led to the six-run second. Austin Wynns started things with an RBI single, and Mullins did the same before Quantrill fielded a Trey Mancini grounder and threw it past catcher Rene Rivera, bringing in two runs.

Santander followed with a two-run double for a 7-0 lead.

Bobby Bradley lined an RBI double for the Indians in the third before the Orioles added five more in the fourth thanks to consecutive RBI singles from Mountcastle, Stewart, Maikel Franco (two runs) and Ramon Urias.

Amed Rosario belted a two-run homer in the fifth before Baltimore added five in the seventh. Santander and Freddy Galvis started the run with RBI singles before Mountcastle added a run-scoring double. Ryan McKenna finished off that rally with a two-run single.

Ramon Urias added a Baltimore run in the eighth with a solo homer, and Bradley hit a two-run blast in the ninth.

Earlier in the day, the Orioles placed pitcher John Means on the 10-day injured list with a shoulder strain, and he was scheduled for an MRI.