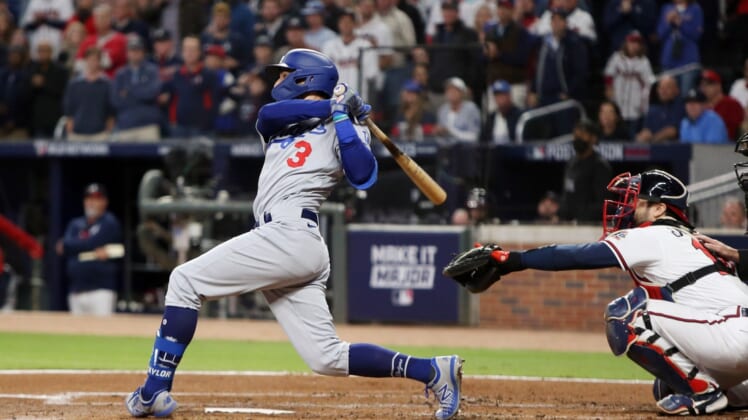 Austin Riley singled home Ozzie Albies in the bottom of the ninth inning Saturday night, giving the Atlanta Braves a 3-2, walk-off win over the visiting Los Angeles Dodgers in Game 1 of the National League Championship Series.

In a game that had been tied since the fourth inning, Albies blooped a single off Blake Treinen (0-1) with one out in the ninth and stole second, setting the stage for Riley, who had homered earlier in the game.

Game 2 in the best-of-seven is set for Sunday night, also in Atlanta, which earned the home-field advantage by virtue of being a division winner playing against a wild-card team.

Will Smith (1-0), who survived a shaky top of the ninth, was credited with the win.

The Dodgers threatened in the top of the ninth when Chris Taylor walked with two outs and Cody Bellinger followed with a single to right. Taylor headed to third on the hit but changed his mind en route and was tagged out in a rundown to end the inning.

Each team used a solo home run to contribute to a 2-2 tie that lasted into ninth.

The teams traded early runs — Atlanta scoring on a Corey Knebel wild pitch in the first inning, Los Angeles getting even on a Taylor RBI single in the second.

The Dodgers’ Will Smith smacked the first homer of the game when he connected off Braves starter Max Fried leading off the fourth.

As Los Angeles had done earlier, Atlanta wasted no time erasing its deficit, with Riley blasting a homer off Tony Gonsolin, the Dodgers’ fourth pitcher, with two outs in the fourth.

Fried was pulled in a 2-2 tie after six innings, having allowed both Dodgers runs and eight hits. He struck out five and did not issue a walk.

In his role as opener, Knebel was charged with one run on one hit in his one inning. He struck out two without a walk.

Riley and Albies had two hits apiece for the Braves, who struck out 14 times and were held to six hits by eight Dodgers pitchers. Los Angeles didn’t have its top three starters available because of its just concluded triumph over the San Francisco Giants in the NL Division Series.

Taylor and Trea Turner collected two hits apiece for the Dodgers, who collected 10 for the game but went 1-for-8 with runners in scoring position.