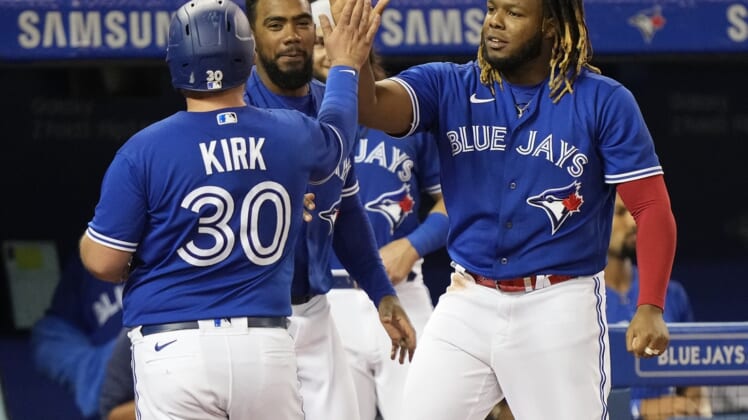 The Blue Jays, who had 17 hits in the opener of the three-game series, have won 12 of their past 13 games.

Manoah (6-2) struck out 10 and did not allow a walk before being replaced by Trevor Richards for the ninth inning.

Joey Wendle had the only hit against Manoah for the Rays (89-55) and also was hit by a pitch.

Austin Meadows homered against Richards, his 25th of the season.

Ryan Yarbrough (8-5) replaced McHugh with one out and runners at first and second in the third. After walking George Springer to load the bases, the left-hander retired Marcus Semien and Guerrero.

Wendle singled with two out in the fifth.

Bichette golfed a low 2-2 pitch for his 24th home run of the season with one out in the bottom of the fifth. Hernandez doubled, Gurriel hit an RBI single, Grichuk had an infield hit and Valera singled in a run. Adam Conley replaced Yarbrough.

Guerrero lined his 45th homer of the season in the sixth.

Nick Anderson pitched around a single and a walk in the seventh in his first appearance of the season for the Rays. He had been out with an elbow injury. Anderson’s first out came on a leaping catch at the center field wall by Kevin Kiermaier on a drive by Gurriel.

Wendle was hit by a pitch with one out in the eighth.