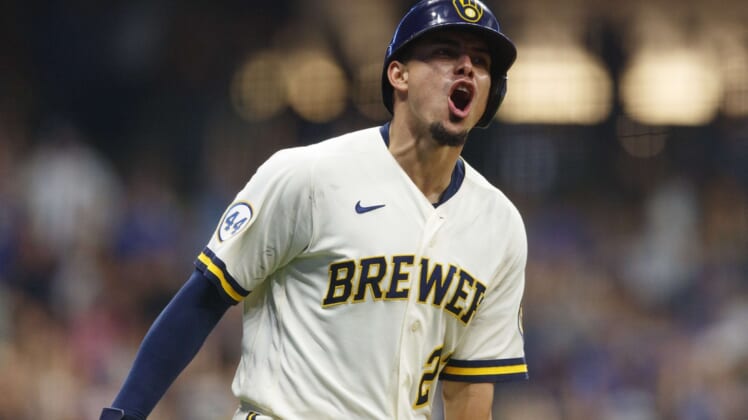 Jackie Bradley Jr. hit a go-ahead double as part of a 10-run eighth inning outburst as the host Milwaukee Brewers topped the Chicago Cubs 14-4 on Monday night to earn their sixth straight victory.

Avisail Garcia, Willy Adames and Keston Hiura homered for Milwaukee. The Brewers improved to 7-3 against Chicago this season but out-hitting the Cubs 15-5.

The Cubs have lost four straight and 10 of 14. Ian Happ drilled a two-run home run two batters into the game, but Chicago couldn’t hold the lead.

Hiura had four RBIs and two hits, including a three-run shot in the eighth that helped the Brewers break open what had been a 4-all tie.

Happ had two hits to pace Chicago. Patrick Wisdom belted a two-run homer to tie the game in the seventh.

Devin Williams (5-1) earned the victory, working around one hit and two walks while striking out one to pitch a scoreless eighth.

Ryan Tepera (0-2) absorbed the loss after allowing four runs on two hits in two-thirds of an inning with two walks and one strikeout. Trevor Megill yielded the home runs to Adames and Hiura later in the eighth.

Cubs right-hander Kyle Hendricks entered the night on an eight-start winning streak, pitching to a 2.25 ERA over that span. His chances for extending the surge encountered a familiar blip, however, as he allowed Garcia’s two-run single in the opening inning.

Hendricks has a 10.69 ERA in the first inning of his 16 starts this season. Overall Monday, he gave up four runs on seven hits in six innings with two walks and four strikeouts.