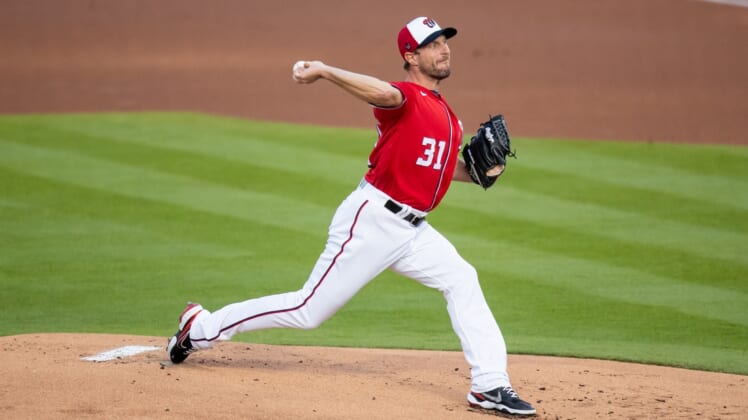 The Washington Nationals finally will open their 2021 season Tuesday when they host the Atlanta Braves.

After a COVID-19 outbreak forced the postponement of a weekend series between the Nationals and the New York Mets — as well as Monday’s Braves-Nationals meeting — the teams will play a single game Tuesday and a doubleheader consisting of two seven-inning games on Wednesday.

“Just anxious to finally get our season going,” right-hander Max Scherzer said Monday as he prepared to start the Nationals’ rescheduled opener. “You’re always anxious to start the season, then you have that big hiccup.

“So, you’re sitting around waiting for it to start. Just ecstatic to get back pitching in Nats Park with fans. That’s going to be the fun part.”

It will be Washington’s first home game with fans since the 2019 World Series because of the coronavirus pandemic.

The shorthanded Nationals were permitted to hold a workout at the stadium on Monday in preparation for the opener. Among those reportedly not in attendance at the workout were pitchers Brad Hand, Jon Lester, Patrick Corbin; catchers Yan Gomes and Alex Avila; infielders Trea Turner, Josh Bell, Josh Harrison and Jordy Mercer; and outfielder Kyle Schwarber.

Scherzer, 36, begins the final season a the seven-year, $210 million contract he signed in January 2015. He’ll be making his sixth Opening Day start in seven seasons after a five-day delay, though he said he was able to throw a bullpen session on Friday.

“It was probably better that nobody was able to be around him. He probably would have been terrible to be around,” first baseman Ryan Zimmerman joked regarding the intense Scherzer. “I can see Max just going out in his own backyard and throwing a baseball to nobody, just to make sure he’s ready. I think he’ll be ready to go. He’ll be fired up as usual.”

The Braves are hoping Nationals Park wakes up their bats after managing only three runs in three games while being swept in their opening series by the Philadelphia Phillies. Those runs came on a solo home run by Travis d’Arnaud and a pinch-hit two-run homer by Pablo Sandoval.

“We just didn’t hit. We scored just three runs. You’re not going to win many games that way,” manager Brian Snitker said. “We’re going to hit. These guys are not going to not hit. They’ve done it their whole career.”

Left-hander Drew Smyly, who signed a one-year, $11 million contract with the Braves in November, will make his Atlanta debut. The 31-year-old from Arkansas was 0-1 in five starts for the Giants last season, posting a 3.42 ERA in 26 1/3 innings.

In his final spring start, he allowed two unearned runs in 4 2/3 innings against the Red Sox.

Smyly has appeared in two games against Washington, six years apart. His only start against the Nationals came in 2019, when he went 6 1/3 innings, giving up two earned runs and striking out 10 in a no-decision.