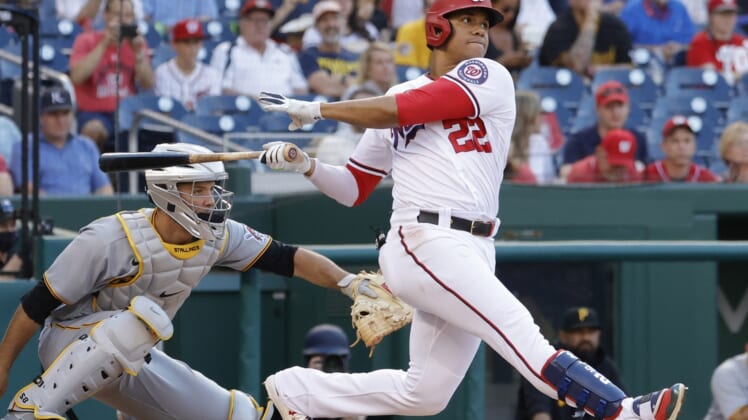 Patrick Corbin pitched into the ninth inning, Yan Gomes hit a first-inning grand slam and the Washington Nationals cruised to an 8-1 win over the visiting Pittsburgh Pirates on Tuesday.

Corbin (4-5) gave up a run on eight hits and a walk over 8 1/3 innings while striking out seven. He threw 110 pitches and left after giving up two singles in the ninth, ending a bid for his first complete game since 2019.

Trea Turner had a triple and three singles for Washington, which has won three straight.

Bryan Reynolds, Erik Gonzalez and Ben Gamel had two hits each for the Pirates, who have lost nine straight.

Pirates starter Tyler Anderson (3-7) allowed six runs on 10 hits over six innings. He has lost five of his past six decisions.

The Nationals opened the first inning with consecutive singles by Kyle Schwarber, Turner and Juan Soto to load the bases. Ryan Zimmerman struck out, but Josh Harrison singled home a run and Gomes connected with a 1-2 fastball for his grand slam to left to make it 5-0.

The Nationals made it 6-0 in the fourth when Victor Robles led off with a walk and later scored on a triple by Turner.

Corbin lost his shutout bid in the seventh when Gregory Polanco reached on an infield single with two outs and Phillip Evans followed with a double just beyond the reaching of a diving Robles in center.

Gomes walked leading off the eighth and Jordy Mercer singled. Robles doubled to center and Gomes scored to make it 7-1. Mercer scored on a sacrifice fly by Schwarber.