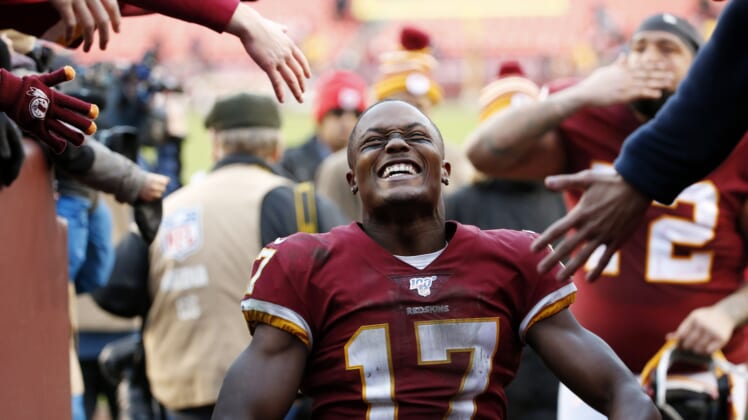 In 2019, many fans felt like the depth and talent lacked at the WR position. Despite those concerns, the team did not make many moves in the offseason. With inconsistent quarterback play and a porous offensive line, Washington Football Team’s wide receivers are going to have a challenging 2020 season.

1- Terry McLaurin starred as a rookie in Washington

McLaurin showed out in a lackluster offense. He finished with just under 1,000 yards receiving and quickly became the No. 1 receiver for Washington.

Now, McLaurin will have a brand new offensive coordinator in Scott Turner. In 2013, Turner worked with Josh Gordon when the current free agent had over 1,600 receiving yards. Turner is already starting to game plan around his personnel. This will only benefit McLaurin.

McLaurin will be the clear No. 1 wide receiver for the Washington Football Team, and he will find himself among the top statistical wide receivers in the NFL.

Cam Sims has been in the NFL for three years, and only has 27 receiving yards. However, he is making a serious impression in training camp.

The 6-foot-5 wide receiver out of Alabama will be a good complement to McLaurin. The latter is a quick and speedy receiver who can make big catches. Sims is a big-body receiver who will go up and get 50-50 balls and no doubt make a name for himself during the 2020 NFL season.

Steven Sims Jr. is a speedy receiver who can become a weapon out of the slot. In a recent press conference, he said that he believes the slot position is his to lose.

Sims Jr. made quite an impression in 2019. He finished with over 300 yards receiving, and he added another dimension to the offense finishing with 85 yards rushing.

This WR will complement Cam Sims’ big body and will allow Washington’s offense to be well balanced on size and speed.

Wide receiver Quinn has only 35 receptions, and this season can be one in which he falls out of favor with the Washington Football Team’s new offense. Quinn still has the potential to be a weapon in the slot, and he provides much-needed depth at the wide receiver position.

Washington selected Gandy-Golden in the fourth round of the 2020 draft. The 6-foot-4 rookie out of Liberty has similar physical features as Cam Sims. He is a big body who can go up and get 50-50 balls.

Gandy-Golden has a lot of raw talent, and if he can mold that talent into production, Washington will have themselves another legitimate depth option in the passing game.