The Minnesota Vikings have quietly positioned themselves in a favorable spot to contend for a wild card berth. It’s unlikely they contend for a Super Bowl, and they could easily fall short of the playoffs. But this team is closer to the one that started last season 5-0 than the one that finished 3-8.

That calculus starts with quarterback Sam Bradford, who is the spitting image of mediocrity. Bradford is described by a lot of people as a game manager, which is another way of saying that the best thing about him is that he doesn’t throw interceptions. That description is more or less correct — per Cian Fahey’s charting, Bradford threw only 13 interceptable passes last season and ranked fourth in the league with 42.6 attempts per interceptable pass. At the same time, however, Fahey found that Bradford’s average depth of target was only 6.43 yards, which ranked 33rd.

In all fairness, some of that is attributable to the scheme Minnesota ran, rather than Bradford as a player. But the former Heisman winner isn’t exactly going to be tossing 80-yard bombs. Bradford is going to look about as good as the players you put around him, and the Vikings have given him a better supporting cast than you may think.

Last season, the Vikings tried and (probably) failed to draft a star receiver in Laquon Treadwell, had no running game whatsoever once Adrian Peterson went down and suffered a number of injuries that made a bad offensive line even worse. Coming into this season, all of those positions look better.

Wide receiver is the only one Minnesota was able to solve without looking to the draft or free agency. Adam Thielen was the star Treadwell couldn’t be last season, putting up 967 yards on 69 receptions and ranking in the top-10 among receivers in both DYAR and DVOA. Expect Thielen to get more targets this season, as he comes in looking like a clear No. 1. Stefon Diggs is a more than capable second option as well. He finished 25th in DYAR among receivers last season and had 903 receiving yards.

Kyle Rudolph is a capable tight end in the passing game as well, quietly posting 83 receptions for 840 yards last season.

Treadwell is still in the picture, though much further from the center than last season at this time. He figures to get a little more playing time than 2016 when he had just three targets, and the ability that led Minnesota to pick him in the first round is still there. If he fixes some of the issues that hamstrung him last season, Treadwell will be on the field and making an impact.

Perhaps the biggest reason to be confident in this passing game, however, is the running game. The Vikings were 31st in rushing DVOA last season and opposing teams knew they could stop the run without even trying. They could sit back and wait for the pass without thinking twice. After drafting Dalvin Cook and making some improvements at the tackle position, that’s changed. Despite a poor performance at the NFL Combine, Cook’s tape at Florida State speaks for itself. The second-round pick showed great ability as a cutter. His vision is already solid, and though there’s room for improvement once he gets in the open field, Cook is a good runner after contact and turns the corner well. He’ll be an instant upgrade over Jerick McKinnon. Latavius Murray will contribute as well. The former Raider figures to be a decent option on third down after putting up 33 receptions last season and gives the Vikings a good safety net in case Cook gets injured. 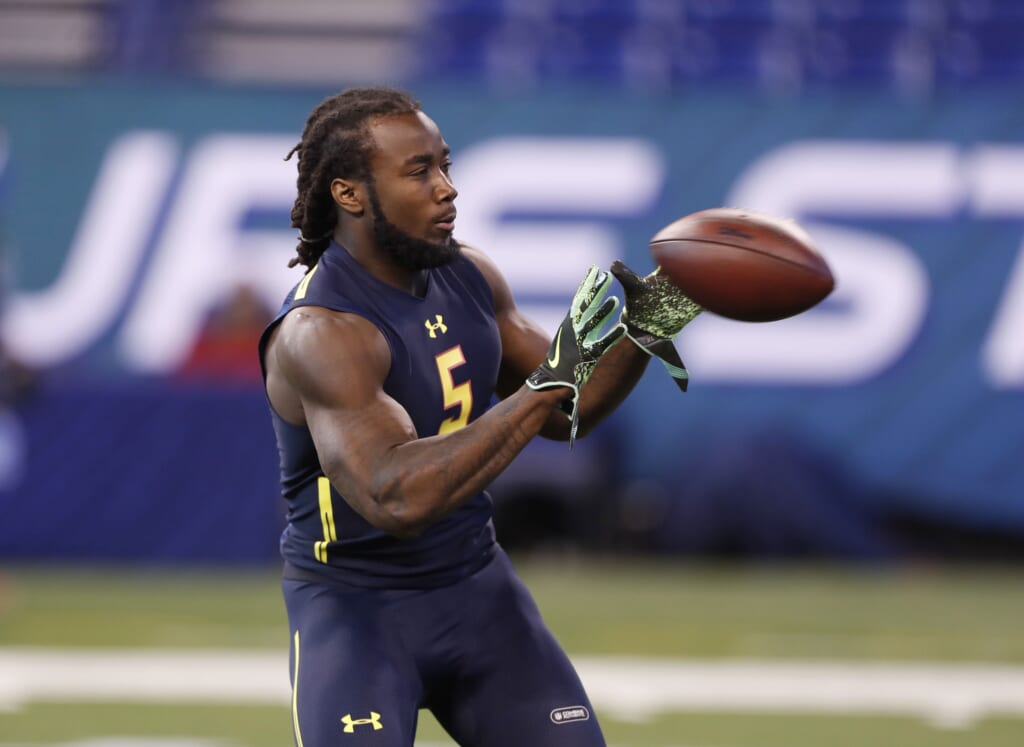 The offensive line is still far from the best in the league. However, compared to last season it might as well be the 1982 Redskins. The Vikings got better at both tackle positions, swapping out Matt Kalil and Andre Smith (as well as their respective backups and third-stringers, who played last season because of injuries), for Riley Reiff and Mike Remmers. Reiff and Remmers are far from All-Pros — you may remember Remmers as the right tackle who got punk’d by Von Miller in Super Bowl 50 — but they’re a big step up. Normally, it’s hard to get excited about two players who blew a combined 31 pass blocks last season and allowed 12 sacks, per Football Outsiders Almanac, but this constitutes an upgrade.

On the interior, Joe Berger is getting up there at age 35, but turned in a solid performance last season. His 83.2 PFF grade ranked seventh among guards. Alex Boone is another solid piece — he had a respectable 72.8 PFF grade last season — and center position is shaping up to be a battle between Nick Easton and rookie Pat Elflein. Expect Elflein, a third-round pick, to have the job a couple games into the season if not by Week 1. Elflein is raw in a lot of areas — he allowed three sacks, two hits and 11 hurries at Ohio State last year, per PFF, and needs to improve at reach blocking to play in Minnesota’s zone-heavy run scheme. However, he still may be good enough to beat out Easton in camp given his natural ability as a run blocker.

The best thing this offensive line could have going for it, however, will be injury luck. Minnesota was dead last in adjusted games lost last season, per FOA, and the line took the brunt of that. It would be shocking if injuries hit the Vikings that hard again.

If Minnesota does contend for the playoffs, it will be with a league average offense and a top-10 defense. In looking at the defense, there’s good reason to believe that’s an attainable goal.

The Vikings were first in adjusted sack rate and fifth in pressure rate last season, per FOA, and their defensive line could get even better. Danielle Hunter looks like as good a breakout candidate as there is in the league after putting up 12.5 sacks, eight hits and 19 hurries in his age-22 season, per FOA. He is the name to watch on this defense. Hunter looks like a superstar in-waiting and if he can take that step this year, it will be huge for Minnesota. 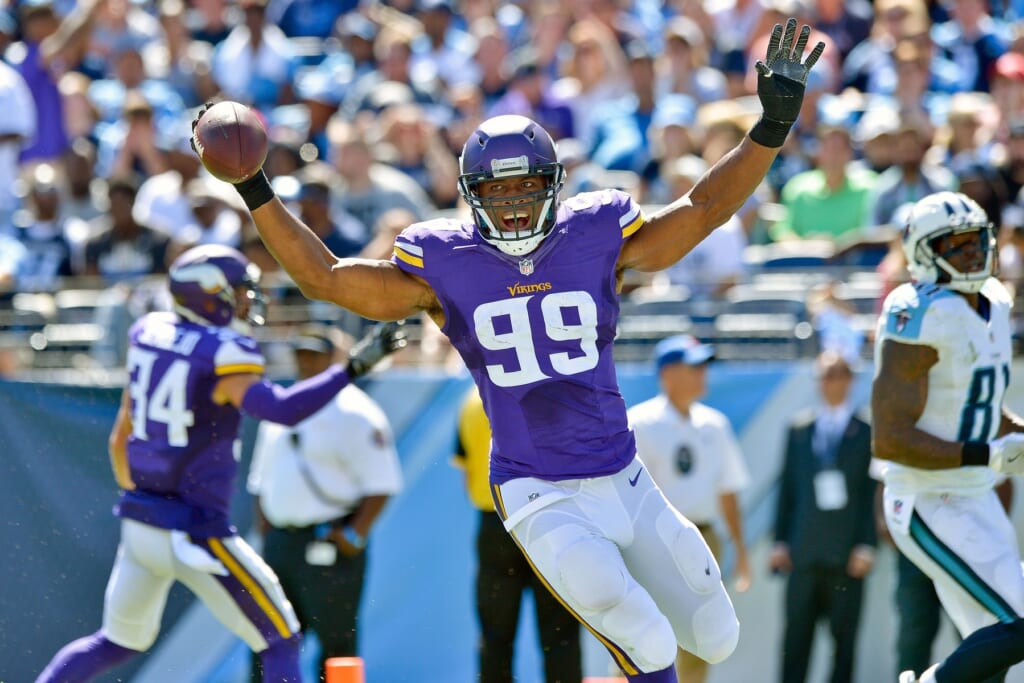 Elsewhere on the defensive line, things look peachy. Linval Joseph and Tom Johnson are solid on the inside, with each putting up 20 or more hurries last season, per FOA. The duo could improve from a run defense perspective, as their stop rates equaled 66 and 71 percent, per FOA, but interior pressure won’t be an issue. Run defense could be an issue for this line. Hunter wasn’t particularly good in the area and neither Everson Griffen nor Brian Robison are star run defenders. The Vikings were 24th in adjusted line yards last season, and it’s hard to see that getting better.

However, the linebacking corps and secondary could be a saving grace. Minnesota was in the top-10 when it came to both second-level and open field yardage last season, per FOA, thanks to those two positional groups. With Chad Greenway gone, the calculus looks a little worse. But Anthony Barr and Eric Kendricks are capable run defenders. Barr was in the top 40 among linebackers with a 64 percent run stop rate, per FOA, and Kendricks wasn’t far behind at 62 percent. It’s hard to depend on linebackers for run defense, but these two may be good enough.

Harrison Smith makes the run defense picture look brighter as well. The safety is probably the best run defender at his position in football, putting up an 89.9 PFF run defense grade last season. Smith is a menace as a box safety — a hard-hitter whose average run tackle was only 5.1 yards away from the line of scrimmage, per FOA.

The linebackers could improve in coverage. Kendricks was ninth among linebackers in adjusted yards per target  at 4.9, according to FOA, but Barr and Lamur both struggle in the area. Barr had an abysmal 35 percent success rate in coverage last season, per FOA. Lamur missed most of last season with injury, but has struggled in coverage in the past with a 39 percent adjusted success rate in 2015, per Football Outsiders.

At cornerback, the Vikings are more or less set after Xavier Rhodes signed a five-year, $70 million contract this offseason. Rhodes gave up just 6.6 adjusted yards per target last season, per FOA, and is one of the better run defenders in the league among cornerbacks. The biggest question in the secondary is Terence Newman. Newman had an outstanding 2016, finishing top-10 in both success rate and adjusted yards per target. But he is 39 this season. He’ll decline at some point, and Minnesota has to hope it won’t be this season. At nickel back, Mackensie Alexander struggled in his rookie campaign, but the former second-round pick could improve in his sophomore season.

At safety, Smith and Andrew Sendejo are a better duo in run defense than coverage, but they aren’t half-bad in the latter category either. Smith had a solid 78.4 PFF coverage grade last season and Sendejo had 23 stops last season, per FOA. The secondary isn’t going to turn heads, but it’s good enough to hold down the fort while the pass rush does its thing.

Minnesota isn’t outstanding in any one area, but the best case for them as a team is that it has very few weaknesses. Assuming their injury luck turns around, the Vikings should be playing meaningful games in December.