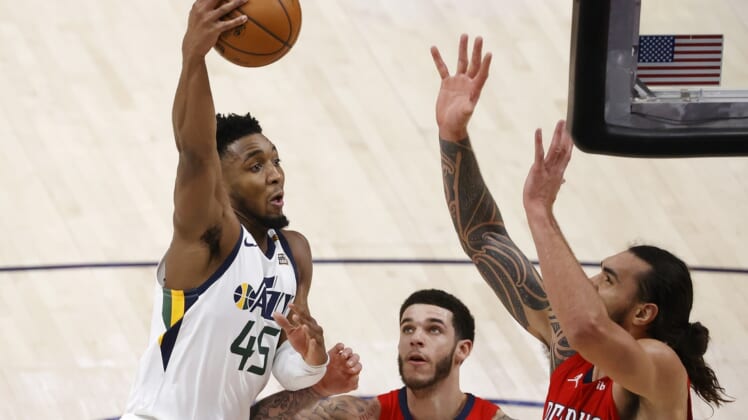 Heading into Saturday’s showdown in Salt Lake City against the Golden State Warriors, the Utah Jazz aren’t exactly being treated like a team that has the NBA’s longest winning streak of the season.

Earlier this week, the league announced that the Jazz-Warriors game originally scheduled to be televised Saturday afternoon on NBA TV would no longer be broadcast nationally and instead was moved to a night tip-off (9 p.m. ET).

Along with that change, a perceived slight among some Jazz faithful, the team’s leading scorer, Donovan Mitchell, and top defender, Rudy Gobert, have both been on the receiving end of criticism by Hall of Famer and TNT analyst Shaquille O’Neal.

After the Jazz’s second straight blowout win over the New Orleans Pelicans on Thursday, O’Neal interviewed Mitchell and shared his opinion of the All-Star, saying, “You don’t have what it takes to get to the next level.”

Mitchell had just scored 36 points, drained six deep shots to become the fastest NBA player to reach 600 3-pointers, grabbed seven rebounds and dished out five assists in the 129-118 win while leading Utah to a seventh victory in a row.

“Shaq,” a surprised Mitchell responded, “I’ve been hearing that since my rookie year. I’m just going to get better and do what I do.”

That criticism comes on the heels of O’Neal going after Gobert earlier in January. The two-time NBA defensive player of the year and All-Star, who signed a massive contract this past offseason, was averaging just under 12 points when Shaq grumbled, “This should be an inspiration to all the little kids out there. You average 11 points in the NBA, you can get $200 million.”

Gobert tweeted in response that he would continue to beat the odds. On Thursday, he added, “Whatever they want to call us, if we keep winning games, they’re gonna have to keep watching us … maybe all the way until July.”

Regardless of whatever anybody says or how the schedule changes, there’s no disputing that the Jazz are playing at an elite level while climbing the rankings in the Western Conference. They’ve been on a roll against the Warriors, too, having swept them in four games last year, winning eight of the last 10 overall, and claiming three straight at home against Golden State.

The Jazz stormed back from down 16 on Thursday to beat the Pelicans by double digits, showing growth.

“There were games earlier in the season, like Minnesota, where we came out flat,” Mitchell said. “And if teams hit us first, we didn’t have a push-back like we do now.”

The Warriors, meanwhile, are trying to find consistency — other than consistently following consecutive wins (done four times) with one or two losses. Golden State stumbled at home against New York on Thursday, losing 119-104, after wins over the Lakers and Spurs.

Draymond Green was ejected in the first half against New York.

“We were a mess without him,” Golden State coach Steve Kerr said of his big man, who’s also missed games with a foot injury. “I think Draymond is realizing how important he is to this team.”

Though a reason wasn’t given for taking this game off the national TV schedule, the Bay Area News Group reported that the tipoff was pushed back so that more COVID-19 tests can be processed before the game starts. A team source told the media outlet that the move will help reduce risk of an infected player playing and spreading the coronavirus.