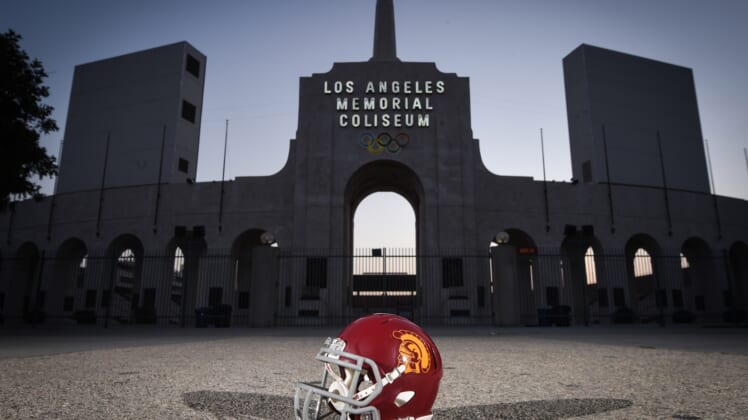 May 1, 2016; Los Angeles, CA, USA; General view of Southern California Trojans football helmet and the Olympic torch at the peristyle end of the Los Angeles Memorial Coliseum. The Coliseum operated by USC will serve as the temporary home of the Los Angeles Rams after NFL owners voted 30-2 to allow Rams owner Stan Kroenke (not pictured) to relocate the franchise from St. Louis for the 2016 season. Mandatory Credit: Kirby Lee-USA TODAY Sports

There is growing optimism around the Pac-12 that football games will not only be played, but that they’ll have fans in the stands, too. USC athletic director Mike Bohn shared that positive sentiment in a letter sent to season-ticket holders on Tuesday.

Ryan Kartje of the Los Angeles Times shared a direct quote from Bohn, who wrote that USC is “preparing for the possibility that fans will be permitted to attend games this year in a reduced capacity Coliseum.”

The key words here are “possibility” and “reduced capacity.”

Given comments California Governor Gavin Newsom has made about fans in the stands this fall, it’s clear there will be no packed stadiums.

The University of Southern California recently announced that it is bringing back in-person classes this fall, along with an online curriculum. Earlier in the year, the sentiment around college football was that games could be played as long as students were attending classes on campus.

The University of Alabama had a bit of a scare when nearly 50 football players were exposed to teammates who tested positive after they worked out with their peers.

So, while there is optimism from the top brass at these schools that football will be played this fall, it may not be as linear as it appears.