Upset Picks for Week 6 of the NFL Season

There are some games on the Week 6 slate that seem to defy logic when it comes to who Vegas is projecting to win. Once such matchup is in the NFC North where the Detroit Lions are traveling outdoors to take on the Minnesota Vikings. History tells us a story that Detroit will not be successful in its attempt to rebound from recent struggles.

Meanwhile, a Dallas Cowboys team that has won four consecutive game is near double-digit underdogs to the Seattle Seahawks on the road this upcoming weekend.

Those are two of our upset picks for Week 6 of the NFL season. 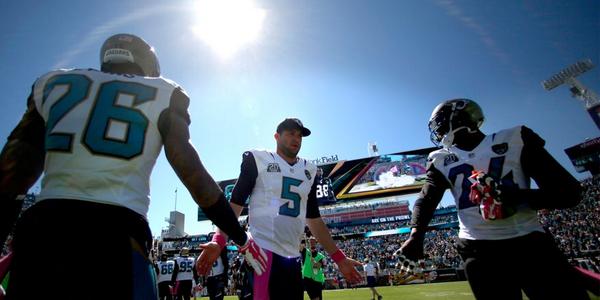 Blake Bortles and the Jaguars could be in line for their first win.

Whoever is under center for Tennessee in this game will have to put up some points in order to fend off a talented Jaguars offense that has a lot to prove after a substandard Week 5 performance against the Pittsburgh Steelers. At this point, indications are that Jake Locker will not be able to go after leaving with a thumb injury last week. Backup Charlie Whitehurst also indicated that he’s been taking first-team reps this week with Locker not able to go in practice (via the Tennessean).

If Whitehurst does indeed start, there is a chance that rookie Zach Mettenberger will see some action. With either one of these under center, the Jaguars stand a really good chance at earning their first win of the season.

Tennessee ranks 27th in the NFL in scoring defense at 27.8 points per game. And interestingly enough, it is giving up over 410 yards of offense per game at home this year. Currently five-point underdogs and with the talent to move the ball against a lackluster defense, Blake Bortles and Co. should have a mighty fine day.

I am honestly not too sure why Detroit is favored on the road against a divisional opponent. The team is 6-12 away from the  Ford Field since the start of the 2012 season. It’s also not a secret that Calvin Johnson has been struggling with a high-ankle sprain and may not be able to go in this one. Even if he does suit up, Johnson will likely be treated more like a decoy than anything else.

For the Vikings, it’s all about getting Teddy Bridgewater back in the fold. He was extremely impressive in his first NFL start two weeks ago before missing Minnesota’s Week 5 matchup with the Green Bay Packers. Now only one game behind Green Bay and Detroit in the division, Bridgewater and Co. have an opportunity to pull of a big win inside the division on Sunday. I expect that to happen. 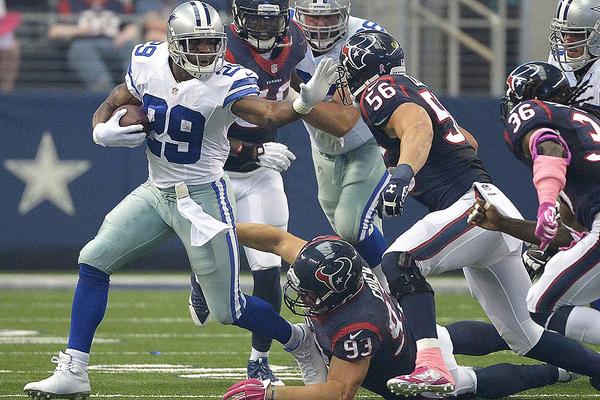 Courtesy if SI.com: DeMarco Murray, not Tony Romo, is the x-factor here.

Seattle has won 19 of its last 20 home games by an average of over two touchdowns per game. It is also taking on a Cowboys team that had to go to a silent count at home against the Houston Texans last week and has been performing much better on the road as of late. That could very well be an indication that Tony Romo and Co. will be ready to handle the noise that the 12th man will bring come Sunday afternoon.

Looking at it through a statistical lens, the Cowboys seem to have some advantages here. Seattle is yielding an average of 282 passing yards per game over the last three outings. It will have to account for Dez Bryant, Terrance Williams and Jason Witten in the passing game. This means that league’s leading rusher, DeMarco Murray, will be facing a defense that’s going to have to scheme more against the pass than we have seen in the past. That should give Murray some nice holes to run through, especially considering the Cowboys complete domination up front on the offensive line.

Offensively, the Seahawks have advantages as well. Russell Wilson is currently playing like a true MVP candidate, while Marshawn Lynch continues to display a bullying running ability that few in the league possess. However, Seattle doesn’t have the down-field threats to push Dallas’ coverage away from the line. Without that threat, the Cowboys can focus on putting pressure on Wilson and stopping Lynch on the ground. Overall, I feel a major upset brewing here.