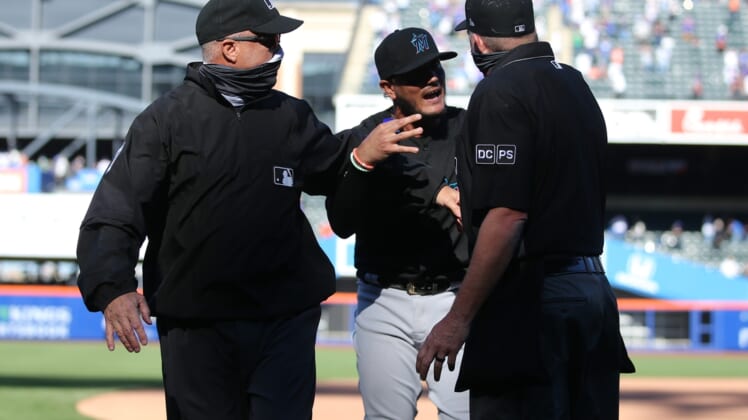 Major League umpire Ron Kulpa admitted that he erred in his call that gave the New York Mets a walk-off hit-by-pitch victory over the Miami Marlins on Thursday.

In the bottom of the 9th inning with the game tied 2-2, Kulpa, home plate umpire for the game, began to call Michael Conforto out on strikes but instead awarded him first base after ruling the ball grazed Conforto’s arm on a pitch from the Marlins’ Anthony Bass.

The Marlins argued the call but to no avail.

Kulpa admitted after the game it was the wrong call.

“The guy was hit by the pitch in the strike zone. I should have called him out,” Kulpa told a pool reporter.

The umpire crew reviewed the play on replay but only to verify that Conforto was hit by the pitch.

“We looked at the video afterward and it’s one of those plays where it looked like the guy was hit … he was hit by the pitch in the strike zone,” Kulpa said.

“It was a strike and (home plate umpire Ron Kulpa) went to call it a strike. He didn’t get hit by a pitch. He got hit by a strike,” Miami Marlins manager Don Mattingly said after the game. “If it’s a strike, how can it be a hit by pitch?”

The Mets trailed 2-1 heading into the bottom of the ninth. Jeff McNeil led off the inning with a solo home run to tie the game at 2-2. Pinch-hitter Luis Guillorme beat out an infield single, Brandon Nimmo followed with a hit and Francisco Lindor was intentionally walked, bringing up Conforto.

“There may have been a little lift in my elbow, just out of habit, out of reaction, and it just barely skimmed the edge of my elbow guard,” Conforto said afterward. “I tend to lean over the plate when I get into battle mode.”