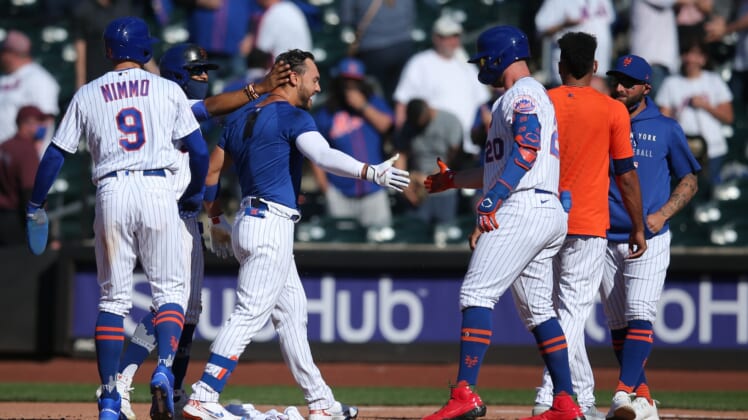 The Miami Marlins and New York Mets were in the midst of a tantalizingly close game in the Mets’ season opener Thursday afternoon.

The score was tied at two in the bottom of the ninth when Mets outfielder Michael Conforto took the plate with the bases loaded and one out. Facing Marlins closer Anthony Bass, the slugger was facing a 1-2 count.

That’s when Conforto obviously leaned in to what would have been a strike three call to take a hit by pitch.

Umpires ultimately went to replay but told Marlins manager Don Mattingly that a hit-by-pitch on a strike can’t be reviewed. As you can tell by the video posted above, Mets fans were even upset about winning by the score of 3-2 in this manner.

The New York Mets improved to 39-31 all-time in home openers, including 9-4 at Citi Field, while the Marlins lost their fourth straight.

A sellout crowd of 8,492 — 20 percent of capacity — turned out for the Mets’ first game in front of fans at Citi Field since Sept. 29, 2019, and the first home game under new owner Steve Cohen, who bought the team last November.

The Mets were in danger of suffering another frustrating early-season loss before Jeff McNeil, celebrating his 29th birthday, led off the ninth by homering to right off Anthony Bass (0-2), who blew his second save opportunity in as many chances.

But that’s not the story.