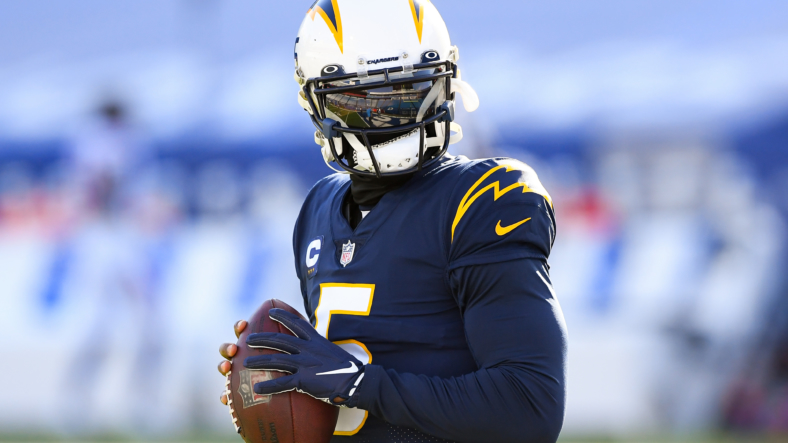 New York Giants quarterback Tyrod Taylor is reportedly seeking at least $5 million in a medical malpractice lawsuit filed against the Los Angeles Chargers team doctor who punctured his lung in 2020.

Taylor opened the 2020 season as the Chargers’ starting quarterback after the franchise drafted Justin Herbert with the 6th overall pick. In Anthony Lynn’s season, Los Angeles hoped that Taylor would serve as the perfect bridge quarterback early in the season while the coaching staff developed Herbert early in the year.

However, everything changed in an instant in Week 2. Minutes before facing the Kansas City Chiefs, the Chargers’ team doctor accidentally punctured Taylor’s lung while giving him a pain-killing injection for cracked ribs. Los Angeles was forced to start Herbert and the then-rookie quarterback thrived, throwing for 311 yards and scoring two touchdowns in a close 23-20 loss to Kansas City.

Taylor needed several weeks to recover from the punctured lung, preventing him from ever getting his starting job back. He would only play one more snap during the 2020 NFL season. It proved to be a disastrous season for the veteran signal-caller, significantly hurting his value before he became a free agent.

According to Adam Schefter of ESPN, Taylor is now suing the Chargers’ team doctor for medical malpractice with damages starting at $5 million. The veteran quarterback alleges he suffered “severe physical pains resulting in hospitalization” and it caused “emotional distress” during a crucial time in his career.

As his attorney told ESPN, the injury cost Taylor the starting job at a point in his career where he could have used a successful 2020 season to strengthen his market in free agency.

The doctor named in the malpractice suit, David S. Gazzaniga, remains employed by the franchise. He is also one of the doctors overseeing the treatment of Herbert, who suffered a rib cartilage fracture in Week 2 against the Chiefs.

After starting six games for the Houston Texans in 2021, Taylor is now the backup quarterback to Daniel Jones in New York. The 33-year-old is one of the best backups in the NFL and will see playing time this season if Jones struggles.