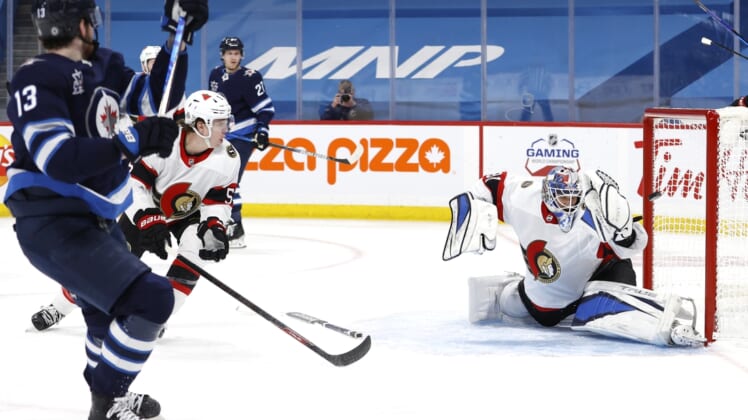 Pierre-Luc Dubois scored two goals for the Winnipeg Jets in a 4-3 win against the visiting Ottawa Senators on Monday night.

Adam Lowry and Kyle Connor also scored, Andrew Copp and Nikolaj Ehlers had two assists each, and Connor Hellebuyck made 20 saves for the Jets, who avoided what would have been their first three-game losing streak of the season.

Ryan Dzingel and Connor Brown each had a goal and an assist, Josh Norris added a goal, and Anton Forsberg made 42 saves in his second straight start and third since he was claimed off waivers from Carolina on March 17.

The Jets took a 4-1 lead late in the second period before holding on for the win.

Blake Wheeler set up the first goal for the Jets when he brought the puck behind the Ottawa net and backhanded a short pass to Dubois at the bottom of the right circle.

Lowry made it 2-0 at 4:19 of the second period when he scored up high on a wrist shot from the top of the left circle.

Dzingel got that goal back 29 seconds later when Hellebuyck lost track of the puck while it was behind his net. Dzingel tucked it into the side while Hellebuyck looked the other way, cutting the lead to 2-1 at 4:48.

The Jets re-established a two-goal lead when Dubois scored on a one-timer from the bottom of the right circle with one second left on a power play to make it 3-1 at 8:38 of the second period.

Connor extended the lead to 4-1 at 16:12 of the second period. His pass attempt went off the stick of Ottawa center Chris Tierney and through the pads of Forsberg for his team-leading 18th goal of the season.

Norris scored with six seconds left on a power play to narrow the lead to 4-2 at 10:25 of the third period.