Top takeaways from Week 4 of the NFL preseason 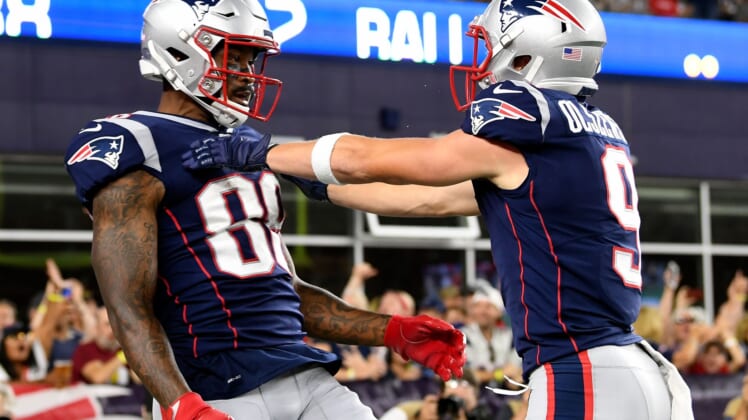 For the most part, teams decided to rest their starters and core players for Week 4 of the NFL preseason Thursday night. All 32 teams took to the field in preparation for the regular-season opener next week.

Despite the lack of big-name players, there’s still a lot we can take away from a full slate of action Thursday evening.

The Jacksonville Jaguars’ backups continued to struggle on offense and finished with 29 total points in four games. In Jersey, Giants rookie quarterback Daniel Jones was perfect in the team’s preseason finale.

Meanwhile, Demaryius Thomas showed out in a big way in his Patriots debut. We were also intrigued to see some major struggles from kickers on the heels of talk that a certain someone could be of interest to NFL teams.

These are among the top takeaways from the final week of the NFL preseason.

Nick Foles barely played in the preseason. In fact, the Jaguars decided to rest most of their starters during the four-game exhibition slate. Even then, what we saw from the backups during the summer tells us the story of a team that lacks depth on offense.

Jacksonville scored a total of 12 points in a blowout loss to the Atlanta Falcons on Thursday night. That brought its four-game total up to 29 points for an average of 5.8 points per outing. It’s the preseason. We get that. But those are some bad numbers no matter the level of competition.

This rookie No. 6 pick impressed the heck out of his New York Giants during the preseason. That did not stop in the team’s exhibition finally against the defending champion New England Patriots. Jones completed all four of his pass attempts for 46 yards, including this beauty of a 23-yard strike to Golden Tate.

Jones finishes up his first preseason having completed 29-of-34 passes for 416 yards with two touchdowns and zero interceptions. Regardless of the games not mattering, that’s an eye-opening stat line. And it has the Giants thinking theu have a quarterback of the not-so distant future.

Seeing multiple NFL kickers struggle with accuracy Thursday couldn’t have come at a better time. The sports world is mired in a debate about the possibility of U.S. soccer star Carli Lloyd making it in the NFL as a kicker after she impressed during multiple workouts. Some think it’s absurd for a woman to play in such a violent. Other former kickers are all for it.

If what we saw Thursday was any indication, Lloyd’s time might be coming sooner than most expected. After giving up a fifth-round pick for Kaare Vedvik earlier this summer, the Vikings saw him miss his third consecutive field goal to start the preseason. It came on a mere 37-yard attempt. Though, that wasn’t the ugliest part of the night for kickers around the NFL.

That was an extra-point attempt from Bears kicker Eddy Pineiro. We’re not even sure what to say about it. Ugly would come to mind. Regardless of your opinion surrounding Lloyd joining the NFL, kicking around the league is an absolute joke.

Making his first appearance on an NFL field since suffering a torn Achilles as a member of the Houston Texans last season, this four-time Pro Bowl receiver was once again at the top of his game. Thomas caught 7-of-8 targets for 87 yards and two touchdowns in his Patriots preseason debut. That included this brilliant score.

Regardless of whether Thomas was doing this against backups, it’s going to make New England think twice about cutting the veteran. In fact, he should make a pretty big impact once Tom Brady connects with the veteran receiver come Week 1. What we saw Thursday night with Thomas hauling in passes from Jarrett Stidham only adds to that.

Lions offense still can’t get out of its own way

Matthew Stafford and the No. 1 offense wasn’t playing Thursday night against Cleveland. That’s fine and dandy. Maybe this unit will magically turn it up come Week 1. But don’t bank on it. Detroit entered its preseason finale ranked 24th in total offense and 25th in scoring. Lions quarterbacks had also been sacked 13 times in 104 drop backs.

None of this changed against the Browns. With Tom Savage under center, the Lions were able to muster all of six net passing yards and 40 yards of offense in the first half. Savage was sacked three times. The team’s only score during that span came on a safety. The Lions might be a defensive-minded team under Matt Patricia, but their offense has looked downright brutal.

Redskins head coach Jay Gruden had already named Case Keenum the Week 1 starter heading into Thursday’s preseason finale. He then gave the keys to rookie first-round pick Dwayne Haskins to close up shop on the summer. Haskins started out strong, completing 8-of-10 passes to open the game. That included this seven-yard touchdown strike late in the first quarter.

Unfortunately, it was downhill from there for the Ohio State product. Haskins connected on just two of his final seven passes before being pulled from the game. That span saw him miss horrifically on throws that should be made. We’ll question Gruden’s decision to start Keenum until we are blue in the face. In no way does that mean Haskins is ready. The latter part of his start Thursday night proved this to a T.

We did not see this coming for the preseason finale. If the Titans were 100% sold on former No. 2 pick Marcus Mariota being the unquestioned starter, then why didn’t the team play Tannehill at all in its preseason finale? After all, this is his first summer in the Titans’ system after being acquired from the Miami Dolphins this past offseason.

There seems to be a simple explanation to this. It’s also rather troublesome for those who believe there’s a ton of confidence in Mariota from Tennessee’s coaching staff. Both quarterbacks have proven to be injury plagued. Even if it were to give him some needed reps, the Titans didn’t want to risk Tannehill going down in an otherwise meaningless game. That tells us how they feel about the potential of Mariota playing well and being successful over a 16-game season.

Tyree Jackson does his thing for the Bills

An undrafted rookie free agent from Buffalo, this big-bodied quarterback boasts a ton of untapped potential. That’s why were were surprised to see a team not select him in the seven-round draft. After a largely inaccurate and questionable preseason performance up to date, Jackson got the start Thursday night against the Vikings. He did not disappoint.

The 6-foot-7 signal caller completed 23-of-33 passes for 175 yards with a touchdown and zero picks. He also added 77 rushing yards on eight attempts. Jackson’s night culminated on a game-winning eight-yard touchdown pass to fellow rookie David Sills in the final seconds. Could this be enough for Jackson to sneak on to the Bills’ practice squad? We think so.

We’re not sure if Green Bay can get anything for this former Cleveland Browns second-round bust. We’re not even sure if undrafted free agent Tim Boyle has beat him out for the No. 2 job behind Aaron Rodgers. What we do know is that the Packers had already seen enough of an impressive Boyle heading into their preseason finale against the Chiefs Saturday.

Boyle completed 3-of-6 passes and threw a touchdown in limited action. Meanwhile, Kizer saw substantially more action. He was nowhere near as impressive as Boyle. It’s been a continual theme throughout the preseason. The former Notre Dame product completed just 8-of-15 passes with a touchdown and an interception. Green Bay was certainly showcasing Kizer leading up to cut down day Sunday. Whether another team bites remains to be seen.

The shocking retirement of Andrew Luck last weekend left open the possibility that this former Mr. Irrelevant could earn a spot on the 53-man roster. Indianapolis went with the troubled quarterback as their starter Thursday evening against Cincinnati. Kelly responded big time.

The young quarterback completed 13-of-16 passes for 138 yards. While he didn’t throw a touchdown and had one pick, Kelly looked tremendous in about a half of action. Kelly is now almost guaranteed to earn a spot on the 53-man roster after he serves a two-game suspension to start the regular year.