There are some absolutely huge stories around the NFL world heading into Week 13. The Minnesota Vikings look to continue their winning ways against the defending NFC champion Atlanta Falcons on the road Sunday.

Staying in the NFC, there’s a potentially monumental game between the Carolina Panthers and New Orleans Saints in the south. Both teams are tied for first, with New Orleans looking to complete the season sweep.

In terms of non-contenders, the New York Giants really did just “bench” Eli Manning for Geno Smith. How’s that going to work out for Ben McAdoo? Meanwhile, the San Francisco 49ers will start potential franchise quarterback Jimmy Garoppolo for the first time since acquiring him from New England in October.

These are among the top storylines for NFL Week 13. 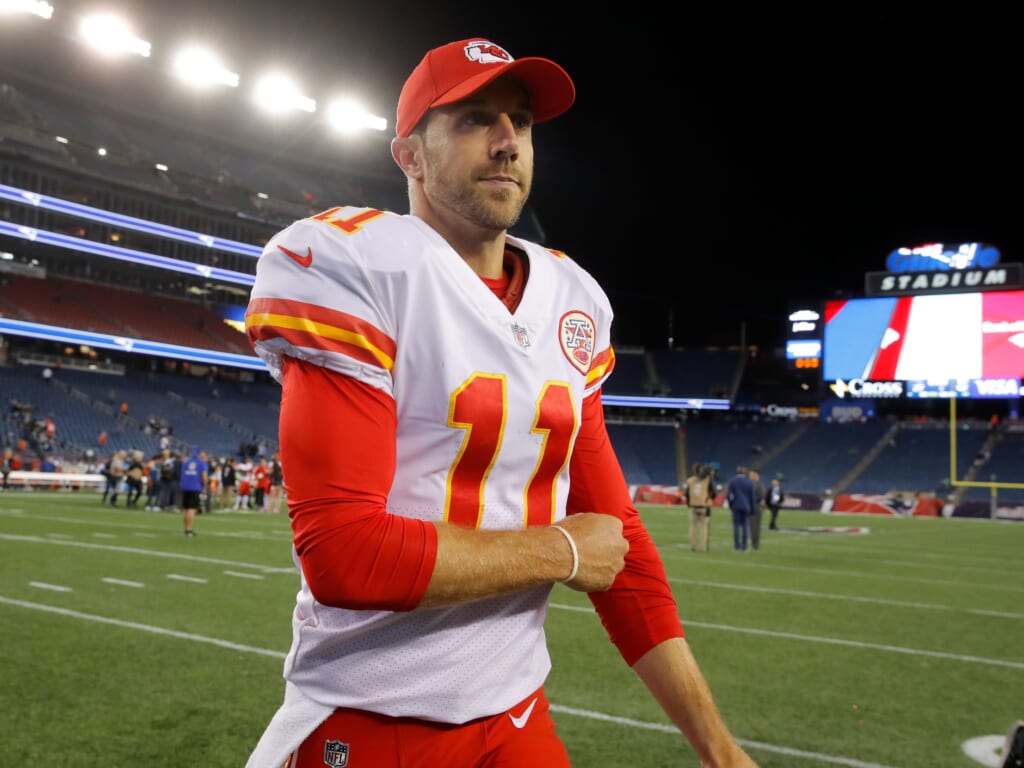 Andy Reid has made it clear that Alex Smith won’t be benched. He’s also gone on record indicating that Smith isn’t the problem on an offense that’s hit a huge brick wall, having scored a grand total of 19 points over the past two weeks. But is this nothing more than coach talk and Reid showing public support for his quarterback?

The veteran has put up just one touchdown compared to three picks over the past two games. His Chiefs sit at 6-5 after a 5-0 start to the season. Kansas City also boasts a rookie first-round pick in Patrick Mahomes that fans are urging Reid to start. Sunday’s game against the Jets is pretty much a must win here. Should Smith struggle initially, it will be interesting to see if Reid’s public tone changes when the game itself actually starts.

Buffalo was able to pull off a surprise 16-10 win over the Chiefs last week. It’s the team’s first victory since back in late October and keeps the Bills firmly alive in playoff contention at 6-5 on the season. Things returned somewhat to normalcy, with the Bills’ defense shutting down Alex Smith and Tyrod Taylor taking back over under center.

That was last week. It’s going to be a completely different ball game against a Patriots team that’s won seven consecutive games by an average of nearly three touchdowns. It’s also the first of two meetings between these squads in four weeks. Buffalo needs to win at least one of them to have a shot at the playoffs. At home Sunday could be the team’s best opportunity.

Jimmy Garoppolo finally gets the start 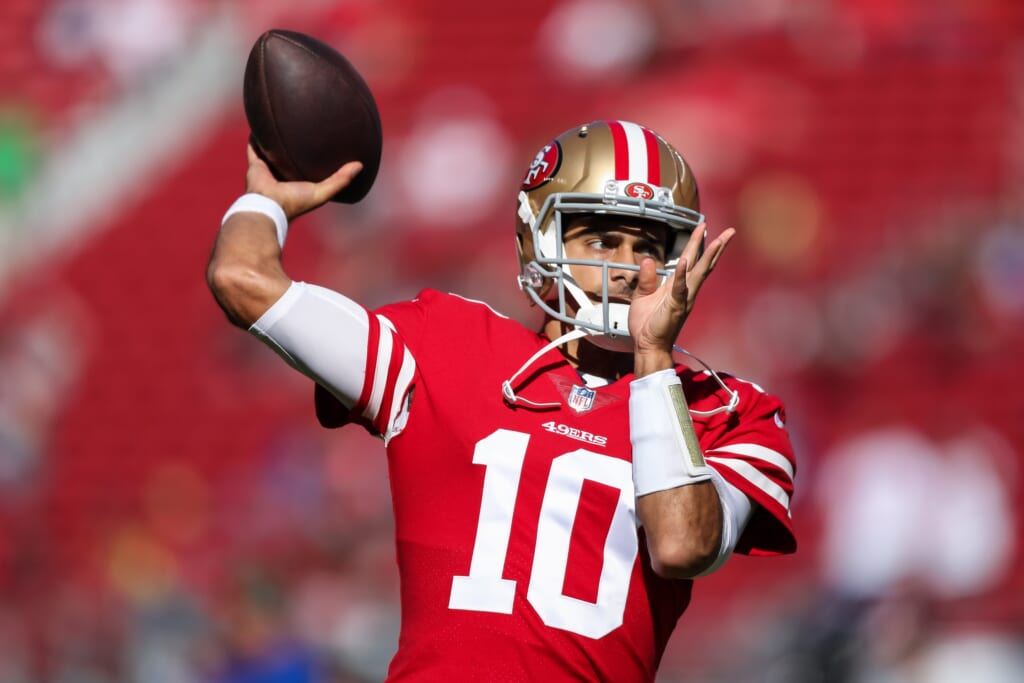 On Tuesday, San Francisco 49ers head coach Kyle Shanahan named Garoppolo the starter over rookie C.J. Beathard for this week’s game against the hapless Chicago Bears. It comes a month after Garoppolo was acquired from New England. It also comes after the former second-round pick threw a touchdown in his first appearance with the 49ers last week.

For many fans in the Bay Area, this has been a long time coming. San Francisco enters Week 13 with a 1-10 record. The team is 3-24 since the start of last season. At the very least, Garoppolo offers hope that San Francisco has its franchise quarterback. A five-game sample size this season will start Sunday against a Bears squad that’s lost four consecutive games.

Elway’s inability to properly deal with the Broncos’ quarterback situation has finally come home to roost. And in reality, it’s been a long time coming. We can’t give Elway too much credit for Peyton Manning’s decision to join Denver after his long stint in Indy. That’s like giving the Colts’ previous brass credit for Andrew Luck falling on their lap at No. 1 back in 2012 while ignoring the rest of the Colts’ failures.

Since Manning, it’s been a downright disaster for Denver. The Broncos traded up with Seattle in the first round last year to select Paxton Lynch, giving up a third-round pick in the process. Lynch has since started a grand total of three games and is now dealing with an ankle sprain.

He was replaced under center in last week’s loss by Trevor Siemian, who was benched in favor of Brock Osweiler earlier in the season. Osweiler himself was a healthy inactive last week. Noticing a theme here? Denver now heads into Week 13 against Miami in the midst of a seven-game losing streak and without anything established under center. Bad times in Mile High, indeed. And Elway is primarily to blame.

Can the Norsemen clip the Falcons? 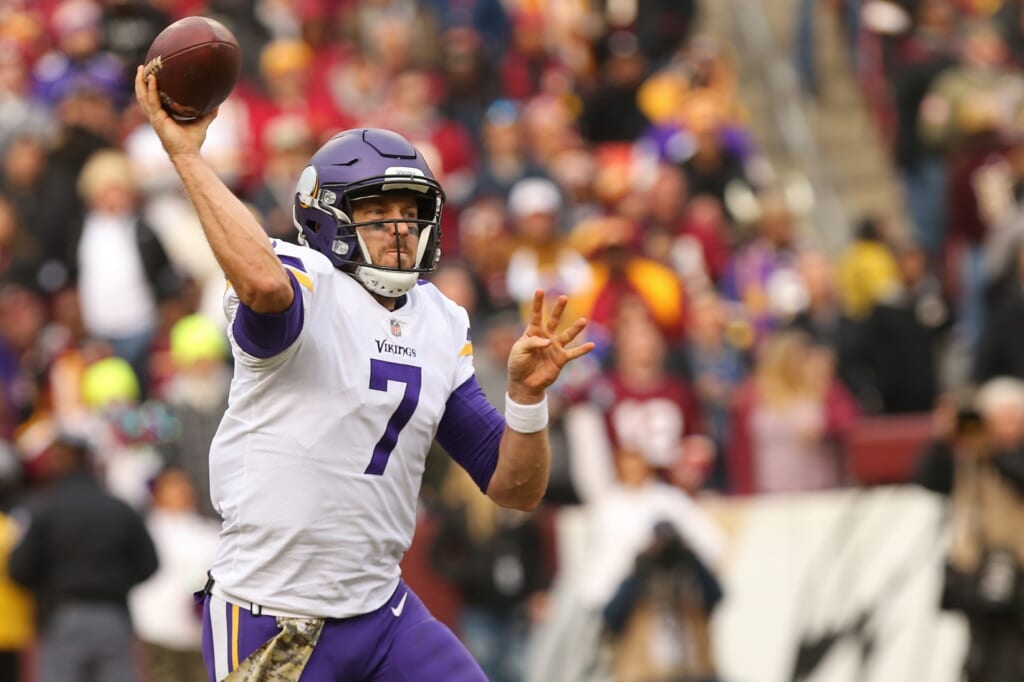 A total of seven consecutive wins. A career backup in Case Keenum who was just named NFC’s Offensive Player of the Month for November. One of the most-talented defenses in the entire league. Minnesota is riding high right now in hopes of hosting the Super Bowl in February.

With a firm grasp on both the NFC North and a first-round playoff bye, the Vikings would like nothing more than to put the defending conference champs on notice. That opportunity comes this week against a red-hot Falcons team in Atlanta. A win here, and Minnesota as the talk of the NFL.

Last week’s win over Denver was huge for the Raiders in that it pulled them to within one game in the AFC West. Though, it didn’t come without a cost. Starting receivers Michael Crabtree (suspension) and Amari Cooper (injury) will be forced to sit out Sunday’s game against Geno Smith and the New York Giants.

Despite this, Oakland should be able to handle a drama-filled and injury-ravaged Giants team rather easily at home. Should that happen, Jack Del Rio’s squad will move to 6-6 and be in firm division title contention heading into Week 14. A let down here against a team that just benched Eli Manning would pretty much be season-ending. 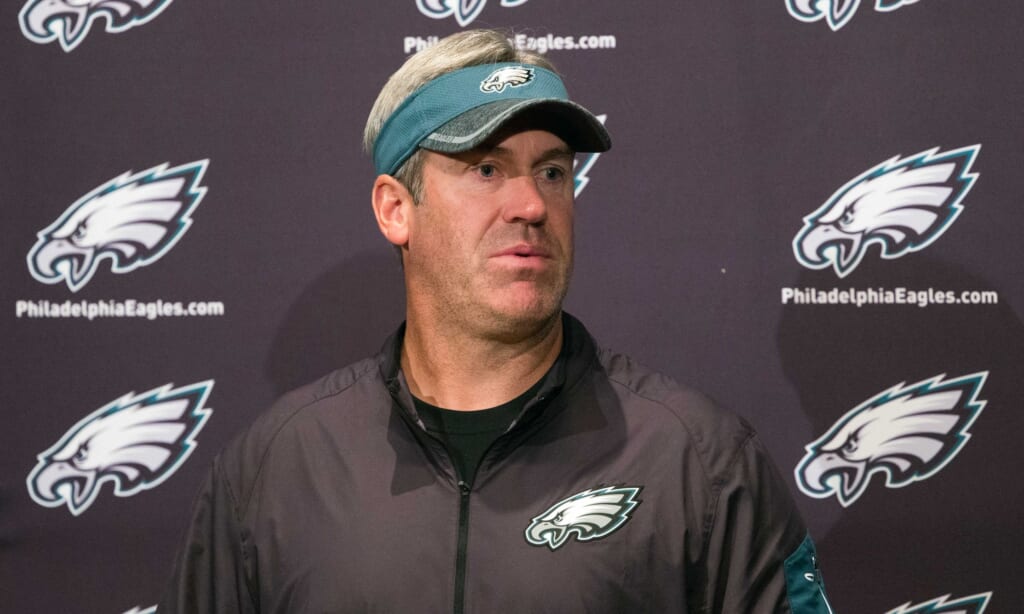 It’s all about love in Philadelphia with Carson Wentz and the Eagles in the midst of a nine-game winning streak. Just ask head coach Doug Pederson. Now set to take on a playoff contender in the form of the Seahawks in Seattle Sunday night, the first-place Eagles are looking for yet another statement win.

Wentz will look to continue his MVP-caliber season against a Seahawks defense that’s without Pro Bowlers Richard Sherman and Kam Chancellor. The very same defense that has uncharacteristically yielded 34-plus points in two of the past five games. With 24 touchdowns compared to three picks during this current winning streak, Wentz should be able to do just that. But we still can’t ignore what will be a hostile environment in the Pacific Northwest. It will surely be a major test for the second-year signal caller

It seems as if Green Bay Packers head coach Mike McCarthy has quietly been on the hot seat for some time now. It’s only recently hit the front burner now that Aaron Rodgers is sidelined and Green Bay finds itself mired in a major slump. With Brett Hundley under center, the Packers have lost five of their past six games.

This has to change Sunday against a below-average Buccaneers team if the Packers want to even be in playoff contention moving forward. And now that at least one high-profile member of the team has questioned Green Bay’s decision to place Aaron Rodgers on injured reserve, that’s magnified a bit further. At 5-6, the Packers must win their next two games before Rodgers is eligible to return in order to remain viable in the NFC, and in turn, potentially save McCarthy’s job.

Last week’s loss to Arizona definitely stings for the Jaguars. Not only did they lose to former Jacksonville first-round bust Blaine Gabbert (the irony), they also fell into a first-place tie with Tennessee in the AFC South. With the Titans holding that all-important tiebreaker right now, a win against what should be an over-matched Colts squad on Sunday has to come to fruition.

Jacksonville sits at a surprising 7-4 on the season and is one game ahead for one of the two wildcard spots in the AFC. Though, two of those losses have now come against teams with records under .500. Consistency has been an issue here, and that must change in Week 13.

Successful return of NFL in LA 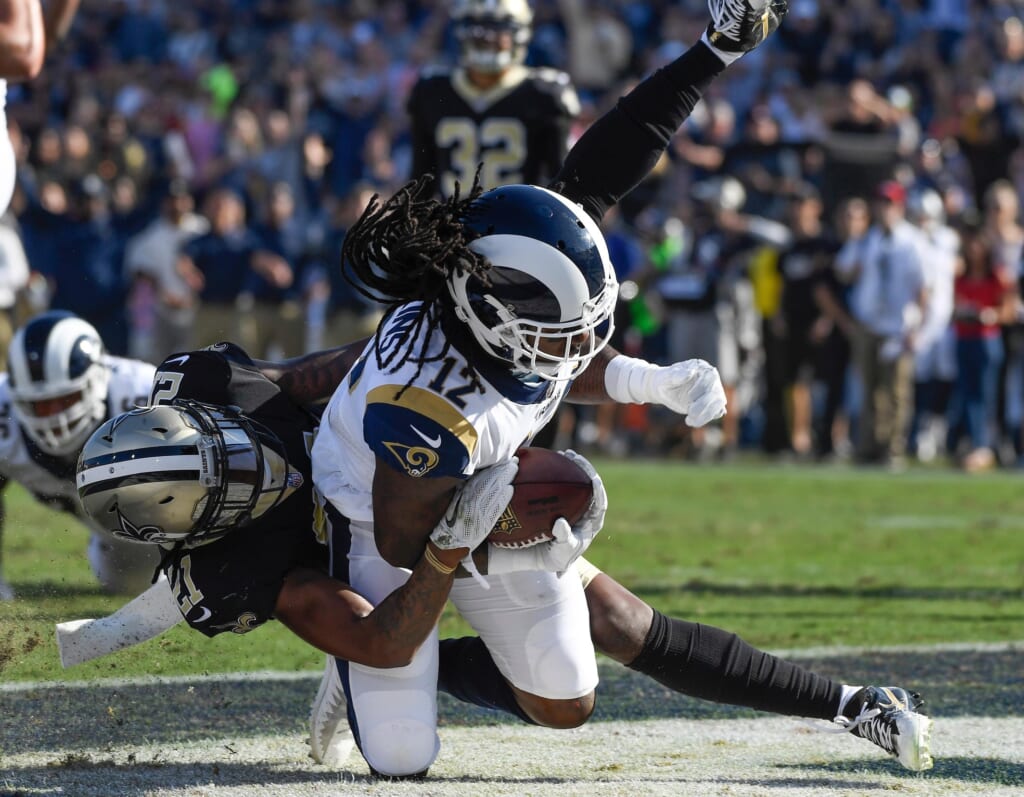 The Los Angeles Rams are going to make the playoffs this season and seem to be legit Super Bowl contenders. Let that sink in for a second before we inform you that another Los Angeles-based team — the Chargers — are now just one game back in the AFC West. Some may say that Los Angeles doesn’t deserve this with the sparse attendance we’ve seen this season, but that really matters little.

The Rams sit at 8-3 following a huge home win against the previously red-hot Saints last week. One game ahead of Seattle in the NFC West, they take on the division-rival Arizona Cardinals this week. Meanwhile, the Chargers have won five of seven since an 0-4 start to the season. They look like the best team in a pedestrian AFC West.

Set to take on the winless Browns this week, the Chargers could also inch back to relevancy heading into the final four weeks of the regular season. On the other hand, their soon-to-be roommates are looking to remain viable in the race for a first-round playoff bye in the NFC. Fun times in Southern California. 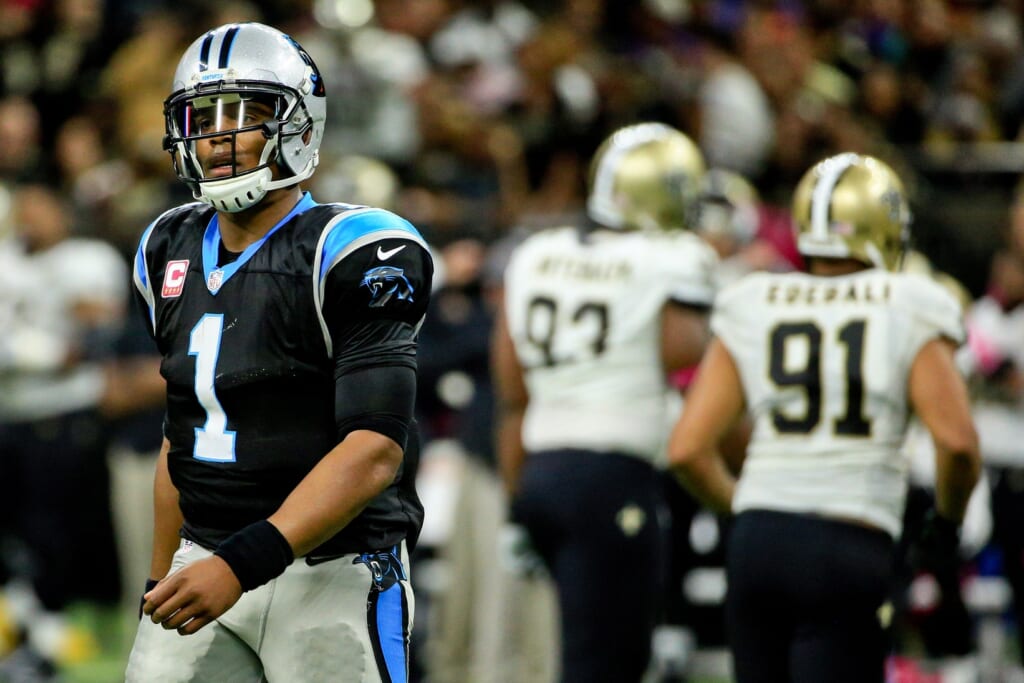 It’s hard to believe that a team with a former NFL MVP has flown under the radar this season, but that’s exactly where Cam Newton and the Carolina Panthers are. Winners of four consecutive, Carolina sits at 8-3 and is tied with a surprising Saints squad in the NFC South. It also still has a clear shot for a first-round playoff bye and is averaging a whopping 40 points in the past two games.

New Orleans, on the other hand, just saw its eight-game winning streak snapped last week by the aforementioned Rams. There’s no shame in that. Los Angeles is playing tremendous football.

But the Saints need to get back to their dominating ways on Sunday in order to move a game up on Carolina in the NFC South and complete a season sweep. With two games coming up against Atlanta in the next three weeks, that’s magnified even further. It will start with the tandem of Mark Ingram and Alvin Kamara looking to do their thing against a top-level Panthers run defense.