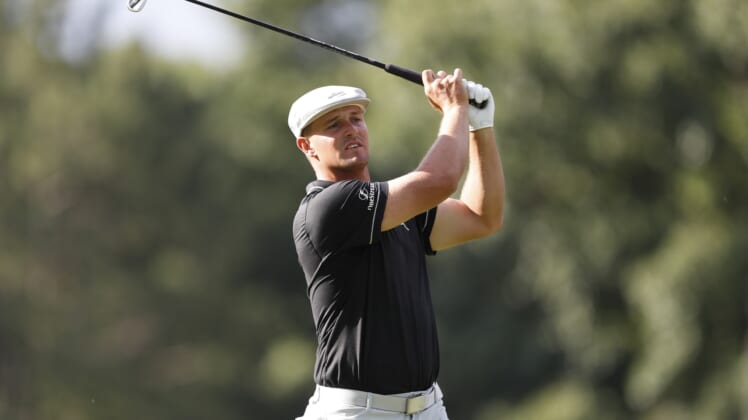 Tuesday’s golf exhibition, The Match, pitted Phil Mickelson and Tom Brady against Bryson DeChambeau and Aaron Rodgers in a modified alternate shot format at The Reserve at Moonlight Basin in Big Sky, Montana.

TNT televised the epic match play showdown, and from the very start, it absolutely lived up to the hype, but the DeChambeau-Rodgers team pulled away on the final nine holes to win 3 and 2.

That “drive for show, putt for dough” cliche doesn’t always hold up on the PGA Tour, but in Tuesday’s exhibition, it absolutely did — and it was Rodgers rolling the rock that proved to be the difference.

The Green Bay Packers star drained a birdie on the par-3 16th to close things out.

Looking back on The Match, there was actually a sign that things were going to go the winning team’s way on the very first hole.

DeChambeau bombed his opening drive, and when Rodgers’ approach to the green came up short, the 2020 U.S. Open champion promptly chipped it in:

After the teams traded pars on the par-3 second, it was on to the drivable par-4. Thanks to a combination of helping wind and elevation, the 392-yarder No. 3 was reachable off the tee.

DeChambeau needed only a 3-wood to find the putting surface, but Brady dazzled viewers with a phenomenal drive that was just as close as the world’s sixth-ranked golfer.

No Laying Up made an astute observation about TNT’s coverage of Brady’s incredible shot:

Never bet against the gridiron GOAT, even when he changes teams for the first time in two decades at age 43, right?

Anyway, Mickelson just missed the eagle putt, while Rodgers and DeChambeau combined to three-putt to make the match all square through three. TB12 was in pretty good spirits afterwards:

Rodgers made an impressive par putt at the par-5 fourth hole, but Brady knocked in a four-footer after Mickelson chipped it close to put his team 1-up.

Again, the quality of golf was really impressive in Big Sky, especially with gusty winds and the difficulty of judging shots. These weren’t ideal scoring conditions by any means.

Usually you can go through a golf recap and skip some holes in the early going. That wasn’t the case here. At No. 5, Mickelson, DeChambeau and Rodgers all hit their shots inside 10 feet.

Obviously, Rodgers and Brady are accustomed to dealing with pressure and the world watching them play football. To excel to this degree in another professional sport, much less one that’s so difficult to be consistent at, is indescribably impressive.

Within the first five holes, Brady drove a par 4 green, Rodgers stiffed it on a 210-yard par 3. Both men sank must-make putts. This is craziness, you know?

The teams traded punches on the sixth and seventh, as Rodgers nearly made an eagle putt en route to a win, and Brady sank a 12-footer on the par-3 No. 7 to put himself and Mickelson 1-up. However, they had to concede the mammoth, 777-yard par-5 eighth hole, which evened the match once again.

Also impressive, and helping his duo to a win at the eighth: Bryson DeChambeau + altitude:

DeChambeau was actually struggling with errant tee shots, and Rodgers was picking up the slack in that area. The quarterbacks had the best drives on the ninth, and after traded pars, the match was all square at the turn.

Trash talk was present throughout from every player, but eventually, one QB started playing better than the other. Rodgers caught fire and helped spark his team to a 3-up lead with massive birdie putts at Nos. 11 and 12. You could feel the swagger coming out of the reigning NFL MVP’s pores.

This was in the mist of Rodgers being questioned by the TNT commentators about his future with the Packers, no less!

Once Rodgers helped create some separation on the back nine, there wasn’t much Mickelson or Brady could do to cut into the deficit.

So, without further ado, here are some of the best reactions from The Match that social media had to offer.