Top Four World Series Contenders Heading Into the Second Half

With the second half of the Major League Baseball season slated to get going later this week, teams are now transitioning to the dog days of summer. The contenders will be separated from the pretenders, as front offices attempt to figure out what to do prior to the non-waiver trade deadline at the end of the month.

Make no mistake about it, these four teams are the top contenders to hoist the World Series trophy in October. They will either be standing pat or looking to add talent to already upper-echelon rosters. These four teams will be among those battling for the championship. 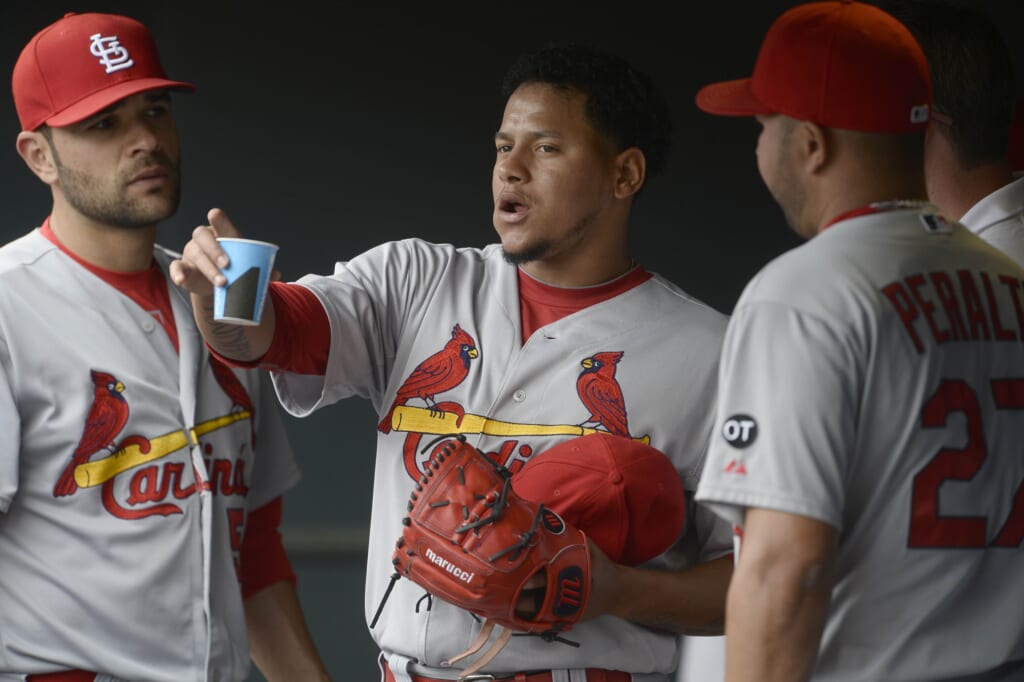 Courtesy of USA Today Sports: Cardinals pitching has been historically good this season.

With the best record since pretty much the opening week of the regular season, there’s little question that St. Louis is best equipped to make a World Series run in what will be a tremendously difficult National League Playoff slate.

The team ranks first in the Majors in ERA (2.71), batting average against (.241) and quality starts (59). Even without Adam Wainwright, the rotation has been utterly ridiculous. All four of the Cardinals primary starters posted ERA’s of under three in the first half, including a 2.52 clip from Carlos Martinez. The fifth starter, Jaime Garcia (currently on the disabled list), boasts a 0.88 WHIP. We are talking historically good pitching here, guys and gals.

It’s not like the Cardinals have been horrible at the plate either. They rank eighth in the National League in runs scored and fourth in average. Jhonny Peralta has led the way with a .298 average, 13 homers and 46 runs driven in. Though, St. Louis could use more production from Matt Carpenter and Jason Heyward, who have combined for a .270 average with 18 homers.

With only a 2.5 game lead in the National League Central, St. Louis needs to continue its domination at the bump. No one wants to be forced to play that one-game wild card—a game that could end up in a fluky loss. Despite a 56-33 record, the Cardinals cannot let up with both the Pittsburgh Pirates and Chicago Cubs (yeah, I know) breathing down their back.

There’s no doubt that Los Angeles has one of the most-talented teams in all of baseball. It has for some time now. The issue in the past had been all about not living up to expectations. With a 51-39 record and a 4.5 game lead in the National League West, that really hasn’t been much of an issue this season.

Like most teams in today’s Major League Baseball, it all starts with pitching in Los Angeles. All-Star Game starter Zack Greinke joins reigning Cy Young winner Clayton Kershaw atop a rotation that possesses the best one-two punch in baseball. For his part, Greinke is putting up historically good numbers. He boasts a ridiculously low 1.39 ERA and 0.84 WHIP in 18 starts, 17 of which have proven to be quality. He’s struck out 106 batters compared to walking just 20. If Greinke can continue this domination, the Dodgers will be in a good position to dethrone the San Francisco Giants in the National League.

Though, it’s improved hitting that has the Dodgers in first right now. Rookie Joc Pederson leads a group of six hitters with double-digit homers at the All-Star break. He’s also the top National League Rookie of the Year candidate with 20 homers, 37 total extra-base hits and a .364 on-base percentage. Even with Yasiel Puig failing to make much of an impact, the Dodgers still rank first in the National League in homers and extra-base hits.

While the Dodgers may need to add another arm to the rotation in order to contend with St. Louis when October comes calling, they have nearly all the pieces in place for a deep run in the postseason.

How are the @Royals​ crushing the AL with an average offense?

Everyone’s darling, the reigning American League champs are a cut above other contenders in the junior circuit. With the best record, best run differential, best home record and second-best road record in the AL, the Royals have been consistently dominating. Building through the farm system and some creative trades, this young team has the look of continued contention in the league.

In an era where pitching has been dominant, the Royals’ previously unknown group of hitters have been darn good this season. Lorenzo Cain (.316) leads a group of four players with a .290 or better average. Eight Royals’ hitters have double-digit doubles, while a total of six players are on pace for double-digit homers. Overall, Kansas City ranks second in the AL in batting average through the All-Star break.

Though, the most-surprising aspect of Kansas City’s success is a less-than-stellar trio of veterans that have combined for a 22-14 record in the rotation. Chris Young, Edinson Volquez and Jeremy Guthrie all put up winning records in the first half. And while it hasn’t been pretty, it’s been just enough to get the Royals to the back end of what has been a dominating bullpen. Of the Royals’ six primary relievers, not a single one posted an ERA over three in the first half. Wade Davis currently boasts a 0.46 ERA with a ridiculous 0.87 WHIP. Jason Frasor and Kelvin Herrera join him with sub two ERA’s thus far. Meanwhile, Greg Holland has 19 saves in 21 attempts.

Anytime a team can shorten a game to five or six innings, it’s going to put up a lot of wins. We saw this first-hand last season, and it’s taken on a whole new meaning in 2015. That’s what separates the first-place Royals from the rest of the pack in the AL.

If you were to tell me that the Nationals would be just two games ahead of the New York Mets at the All-Star break, I probably would have broken down into a laughing fit. But here we are. One team is exceeding expectations, while the Nationals are performing nowhere near expectations. At 48-39, Washington actually boasts just the fifth-best record in the Majors. This despite the fact that it was expected to have one of the best rotations in the history of the game.

Max Scherzer is doing his thing atop the rotation with a 2.11 ERA and 0.78 WHIP. Heck, Jordan Zimmerman (8-5, 3.22) is also pitching well. It’s the likes of Gio Gonzalez, Doug Fister and Stephen Strasburg that have struggled the most. They are a combined 14-13 on the season with an ERA of well over four. The expectation here has to be that at least two of those pitchers will perform up to level in the second half. If that happens, Washington should win the National League East going away.

There isn’t much to write home about as it relates to the Nationals’ offense thus far. Bryce Harper heads into the second half as the front-runner for the league MVP with a .339 average, 26 homers and 61 RBI’s. In fact, he’s a potential Triple Crown candidate. That’s pretty much been the extent of Washington’s success at the plate. That could also hold the team back come October.