Wild Card weekend around the NFL didn’t provide us with the drama that we wanted. The first three games of the weekend were all decided by double digits. And while it looked like the New York Giants were going to do their thing in Lambeau Field again, Aaron Rodgers’ wizardry at the end of the second quarter prevented just that.

It might not have been the best weekend of playoff football. There were some really bad quarterback performances from backups at that position. Some defenses simply failed to show up. And in reality, it didn’t have a tremendous playoff feel to it.

With that said, this weekend’s outcomes have set into motion a final eight that promises to be as intriguing as anything we’ve seen in the past.

Here’s how it unfolded as we take you through the top eight takeaways from NFL Wild Card weekend.

1. Well-oiled Steelers could be major threat in the AFC

Pittsburgh came out firing on all cylinders Sunday against the Miami Dolphins. Thanks to otherworldly performances from Le’Veon Bell and Antonio Brown, the Steelers put up 20 points and nearly 270 total yards in their first three drives. While Miami would attempt to make a game of it with a drive late in the second quarter, a Matt Moore fumble impeded its progress. Up 20-6 at the half, Mike Tomlin’s squad cruised to a 30-12 win.

It was an absolutely dominating performances on both sides of the ball. A physical Steelers offensive line opened up lanes for Le’Veon Bell to run through. He responded by putting up a Steelers postseason record 167 yards on 29 attempts.

Meanwhile, Antonio Brown picked apart a Dolphins secondary that was without Byron Maxwell in this one. He went for two touchdowns in the game’s first nine minutes, the two combining for 112 yards (watch here).

Defensively, Pittsburgh took care of business against an undermanned Dolphins squad with a backup quarterback under center. It forced three Matt Moore turnovers and sacked him a total of five times.

It’s this type of performance that leads us to believe Pittsburgh could be the Patriots’ biggest threat in the AFC. Though, Ben Roethlisberger and Co. will have to get past the Chiefs in Kansas City next week in order to prove their worth among the conference’s best. If Sunday’s game is any indication, they are well on their way.

2. Another dominating performance from Aaron Rodgers 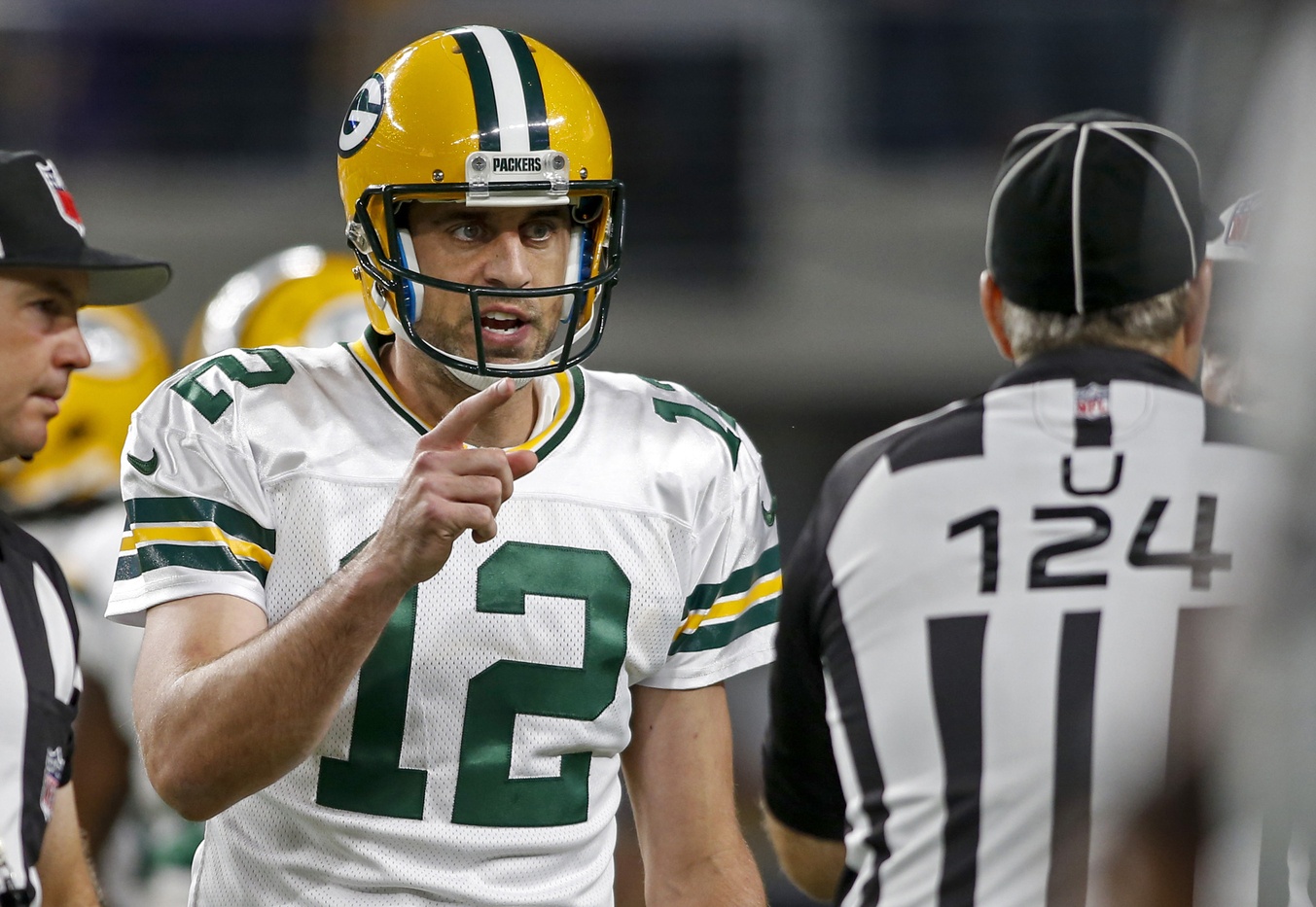 Rodgers headed into the playoffs having thrown 18 touchdowns compared to zero interceptions in his final seven regular season starts. He had his Green Bay Packers riding a six-game winning streak as well.

Though, most figured Rodgers would have a tough go at it against a New York Giants defense that had yielded a grand total of 47 points in the final four regular season games combined. It was one heck of a matchup. One that would likely come down to the end.

At the very least, that’s the way it started out. New York held a 6-0 lead before Rodgers bought about eight years in the backfield to connect with Davante Adams for the go-ahead score. Then, with time expiring in the first half, Rodgers heaved up a Hail Mary from his own side of the field. It connected with Randall Cobb for a touchdown to put the Packers up 14-6 at the half (watch here).

From that point on, it was all domination from Rodgers and the Packers. They put up 24 second half points, including two more Rodgers’ touchdown passes to win going away, 38-13.

This isn’t what many had envisioned for what looked to be a tremendous matchup. Now, after throwing 22 touchdowns with zero picks in his past eight games, Rodgers will lead his Packers into Dallas to take on the Cowboys next week. He will be doing so playing the best football of his career. Watch out, Jerry Jones and Co.

3. No reason to overact to Texans win

The Houston Texans may have won a playoff game by two touchdowns. It might have been an impressive all-around performance, especially from Jadeveon Clowney and the team’s defense. Heck, Brock Osweiler played mistake-free football.

This has led to some absurd speculation that this year’s version of the Texans is similar to what we saw from the Denver Broncos last season. Horrendous quarterback play somewhat masked by an elite defense and solid rushing attack.

These Texans might be dangerous in that they likely won’t be blown out. That’s pretty much where this ends. Anyone with an objective take on this has to conclude that the Texans don’t stand much of a chance next week against the rested New England Patriots at Gillette Stadium. Just ask Vegas.

To all of you overreacting, understand this. One win against a team that was put in an unattainable situation heading into the playoffs doesn’t suddenly make you a conference title contender. Tom Brady will surely show Texans fans exactly this in the divisional round. 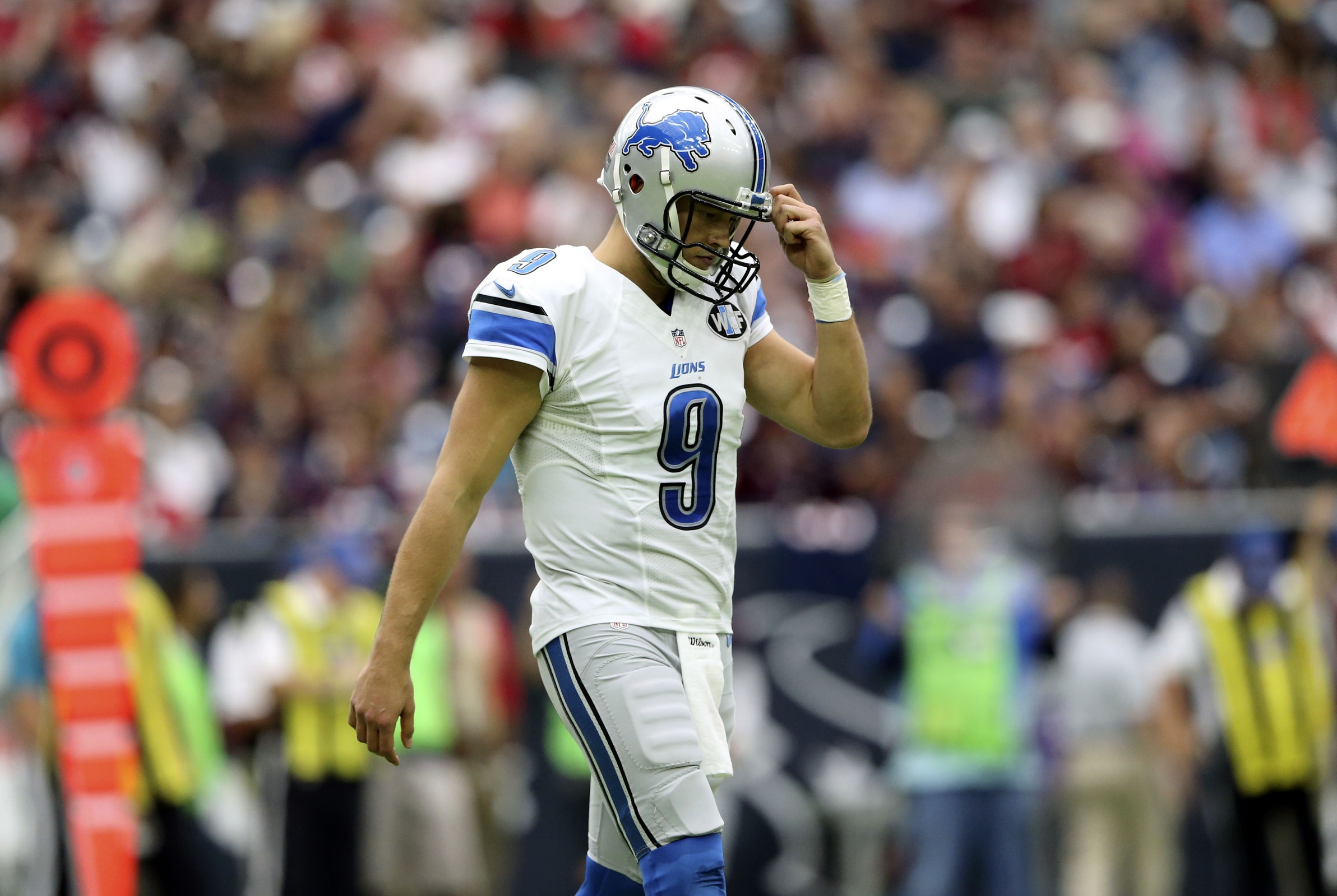 There’s no real reason to conclude that the Detroit Lions lost Saturday evening to Seattle because of the injury to a finger on Matthew Stafford’s throwing hand. That would be utterly foolish. Though, it would also be a mistake to conclude this isn’t one of the primary reasons for his struggles.

Saturday night in Seattle, it was readily apparent that Stafford wasn’t 100 percent. While his receivers did drop a good half dozen balls, Stafford himself was about as inaccurate as we have seen all season. He routinely missed wide open receivers on intermediate passes and stopped short of providing pass catchers with the ability to put up big plays. In the end, Stafford completed 18-of-32 passes for 205 yards without a score or a touchdown.

That’s not going to cut it in the playoffs. It most definitely won’t get the job done on the road against the Legion of Boom with the officials giving Seattle some home cooking.

It’s a rather unfortunate end to the season for Stafford and the Lions. But there’s little doubt that the trajectory is definitely pointing upwards in Detroit.

Former second-round pick Paul Richardson struggled with injuries through his first two seasons in the NFL. When Seattle selected him out of Colorado back in 2014, the expectation was that he would be able to make a major impact. It wasn’t until the team’s Wild Card Playoff game against Detroit on Saturday night that this came to fruition.

Richardson’s stat line of three receptions for 48 yards and a score doesn’t seem too sexy on the surface. That’s until we realize all three catches were of the Odell Beckham Jr variety, one handed and about as implausible as any we have seen this season (watch here).

If Russell Wilson has yet another receiver to rely on down the field to go with Doug Baldwin, that’s going to make it incredibly difficult for the Atlanta Falcons in the divisional round. Also of worry for Atlanta was the performance of Thomas Rawls this weekend.

Seattle’s rushing attack was virtually non-existent in its final three regular season games. The team put up a grand total of 227 yards on 82 attempts for an average of 2.8 yards per rush. Now looking fully healthy for the first time all season, Rawls absolutely dominated to the tune of 161 yards and a touchdown on 27 attempts. It was an historically good performance for the second-year back.

Thomas Rawls has set the Seahawks record for most rushing yards in a playoff game (161 with 2 minutes remaining) pic.twitter.com/PGJNikZqgE

Not bad company to keep right there. And in reality, this could have wide-ranging ramifications for the Seahawks moving forward in the playoffs. If they can get a consistent rushing attack going with a solid secondary receiving threat behind Baldwin, the NFC West champions could prove to be pretty darn dangerous here. That was evident in a 26-6 win over Detroit on Saturday night.

6. Dolphins should still be happy about 2016 season

As much as it hurts to get blown out in their first postseason appearance since 2008, the Miami Dolphins should not be hanging their heads entering the offseason. Here’s a team that opened the season with a 1-4 record.

At that point, many figured that Adam Gase, in his first season, would be no different than the long list of head coaches who have failed in Miami in recent seasons.

What happened next was pretty amazing. Miami won nine of its last 11 games to earn a wild card spot with a 10-win campaign. It found a true franchise running back in Jay Ajayi. The team’s defense stepped up big time and Ryan Tannehill was playing the best football of his career.

Unfortunately, Miami lost Tannehill to ACL and MCL sprains back in Week 14, ending his season. Without their franchise quarterback, the Dolphins had a daunting task of having to go up against the three-headed monster that the Pittsburgh Steelers are. The end result was a humiliating 24-point loss.

That shouldn’t be what Miami takes away from this season. Gase changed the culture to one of accountability in South Beach. The players responded. And in the end, the Dolphins put up their best season in nearly a decade. The arrow is definitely pointed up here.

7. Giants fall asleep at the wheel 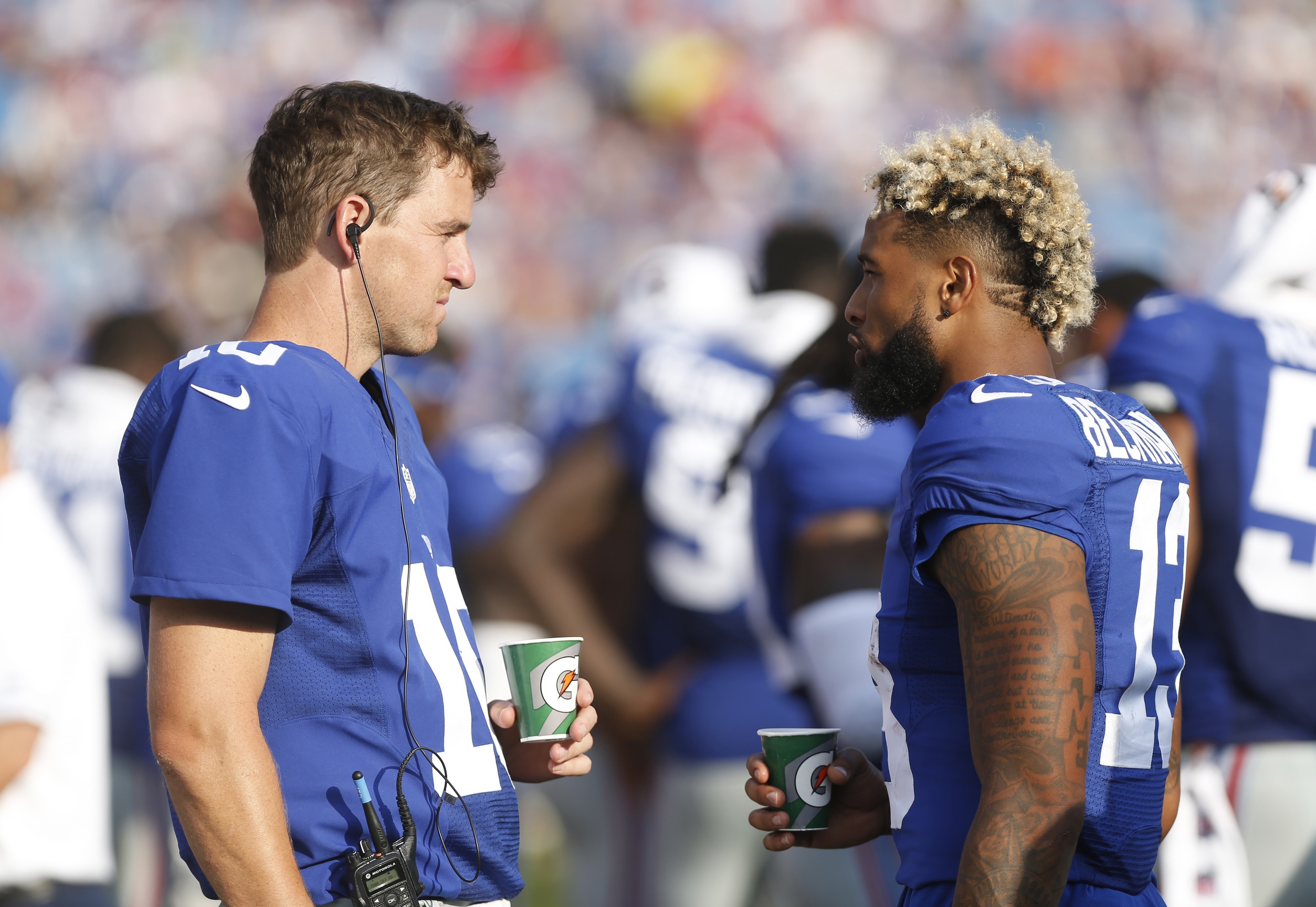 Maybe it was the trip to Florida and ensuing romp with Justin Bieber on a boat. Maybe it was something completely different. We will never really know what happened between the end of the regular season and their blowout loss to the Green Bay Packers on Sunday. What we do know is that the New York Giants fell asleep. They laid a complete egg. They embarrassed themselves.

Up 6-0 at one point in this game, New York allowed Green Bay to score 38 of the final 45 points, ending a season that saw the Giants streak into the playoffs having won nine of their final 11 games.

Of note, Odell Beckham Jr put up just four catches for 28 yards on 11 targets. This comes days after he was spotted hanging out on a boat in South Beach. It also comes with the star receiver facing a ton of questions about just how invested he is in his football career.

On the other side of the ball, a previously dominating Giants defense yielded over 400 total yards of offense and nearly gave up the same number of points that it had in the previous four games combined.

The Giants may have entered the postseason as a wild card team, but they had expectations. They had Super Bowl aspirations. By the time the clock struck zero at Lambeau on Sunday, that was all a thing of the past.

More so than in previous seasons, it appears that this year’s playoffs have really been impacted by injuries. It’s not about the injuries that took place during the Wild Card weekend. Instead, it’s all about what transpired in the weeks leading up to the postseason.

This is no more evident than with what we saw from the Oakland Raiders following the broken fibula franchise quarterback Derek Carr suffered back in Week 17. Oakland would go on to lose the season finale to the Denver Broncos to force itself into a wild card scenario. In the process, it would also lose backup quarterback Matt McGloin to a shoulder injury.

That forced rookie fourth-round pick Connor Cook into making his first NFL start. In the playoffs. On the road. Against the league’s top defense.

It was ugly. Really ugly.

Cook proceeded to complete 18-of-45 passes with one touchdown and three interceptions. All said, the Raiders gained 203 total yards of offense, including 13 yards in their three possessions.

In any event, much like with the Dolphins before, this shouldn’t be the biggest takeaway from the Raiders’ season. They won 12 regular season games. They earned their first place spot since 2002. And they are very much going to be in the AFC conversation moving forward. It’s just unfortunate that their season had to come to a conclusion in this manner.