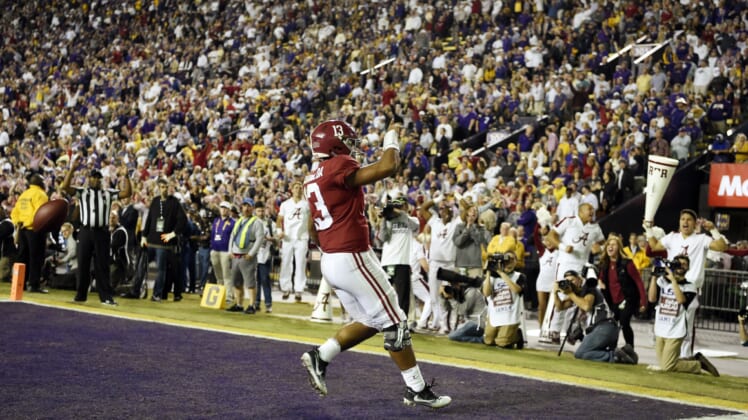 Things are really starting to heat up around the nation heading into college football Week 11, which features a few games with playoff implications.

In addition to the fact that this is the first week that we’ll see the College Football Playoff rankings released, two of the top three teams in the nation will go head to head in the most highly anticipated matchup of the season.

There’s plenty of other stuff going down as well. These are the 10 biggest storylines we’re paying attention to heading into college football Week 11.

Can Minnesota keep the dream alive?

Before the mayhem that’s going to take place in Tuscaloosa Saturday, another game that is almost as big will put the No. 17 ranked Minnesota Golden Gophers front and center on the national stage. The surprisingly undefeated Gophers are hosting No. 4 Penn State, which is also undefeated and just so happens to be one of the most dominant teams in the nation.

The Nittany Lions are incredibly balanced offensively and can score on any given play. They also bring one of the nation’s most-potent defensive fronts, which will put a ton of pressure on Tanner Morgan and Minnesota’s offensive line. It’s hardly surprising that Penn State is favored to win by nearly a touchdown. A Golden Gophers upset victory would certainly create a ripple effect on the College Football Playoff rankings going forward.

Nobody could have predicted that the No. 12 Baylor Bears would be undefeated heading into college football Week 11. This program has taken off under the leadership of Matt Rhule, who likely has a future in the NFL very soon. This season’s flawless record hasn’t come without some scares, though. Baylor nearly lost in overtime to Texas Tech but was bailed out by an awful call by the refs, and West Virginia came very close to pulling off a huge upset just last weekend.

The Bears are on the road this Saturday going against a TCU team that has fallen on hard times of late. But with Horned Frogs freshman quarterback Max Duggan being a big wild card, anything can happen. It’s going to be a fascinating game to watch unfold as Baylor strives to remain perfect and stay atop the Big 12.

FSU moving on without Taggart

It took less than two seasons for Florida Statae to fire head coach Willie Taggart, who leaves with a massive $18 million buyout. The Seminoles head into college football Week 11 with a record of 4-5, having just been blown out at home by Miami last Saturday. Now they’re on the road going against a Boston College team that just ran over Syracuse to the tune of 496 rushing yards.

This game is going to be interesting because it will tell us a lot about how the players left in the wake of Taggart’s firing will react to the upheaval. Will they fight with all they have, or will this team continue to spiral downward for the rest of the season? Change is a’coming to Florida State, regardless. But it’s on the players now to show some pride.

Longhorns have to show up for Tom Herman

Following a 10-4 2018 season, his second at Texas, Tom Herman has watched his Texas Longhorns take a step backward in 2019. The team enters Saturday’s game against No. 16 Kansas State with a 5-3 overall record, and an extremely disappointing 3-2 mark in the Big 12. Through two-plus seasons, the Longhorns are 15-8 in their own conference.

A loss Saturday at home would really usher in a dark cloud over the program as boosters start to pine for a change. Needless to say, this team needs to play its A-game against a very good Wildcats team that recently upset the Oklahoma Sooners.

Must-win game for Iowa and Wisconsin

With four games left to play until the Big Ten Championship Game, No. 18 Iowa and No. 13 Wisconsin are both still alive to represent the western division with records of 3-2 in the conference entering Week 11. It just so happens, they play one another in Madison Saturday. One more loss would almost certainly be the death knell for their hopes of contending for the conference title.

Camp Randall Stadium is going to be absolutely lit up for this rivalry game. Iowa comes into the matchup on a two-game winning streak, while the Badgers have dropped consecutive games. Which team will break its streak? It’s going to be a ton of fun to find out the answer to that crucial question.

Mizzou looking to rock the boat in Athens

The No. 6-ranked Georgia Bulldogs are coming off a huge win against Florida that featured some clutch throws by Jake Fromm and an outstanding effort from their defense. When the Bulldogs are clicking, they are very tough to beat.

What gives us pause is that this team hasn’t been consistent. From also had two poor outings against South Carolina and Kentucky before last weekend’s beautiful performance.

The point is, Missouri absolutely has a shot to win in Athens Saturday if its defense can bring pressure up front and assuming quarterback Kelly Bryant can avoid mistakes. A big X-factor for the Tigers is tight end Albert Okwuegbunam, who already has six touchdown receptions this year.

Can the Irish finally get right?

One week after being demolished by Michigan in Ann Arbor, the No. 15-ranked Notre Dame Fighting Irish came back home and put up a stinker against Virginia Tech. It took a game-winning drive late in the fourth quarter to keep the Irish from getting upset by the Hokies, who simply ran out of gas in the final minutes.

Brian Kelly and Co. are on the road once again in Week 11 for a date with Duke. This is a game the Irish should win handily. But then again, that was also the case last Saturday in South Bend. In particular, we’ll be watching to see if Ian Book can put together a complete game and finally get the offense back on track against a Blue Devils defense that isn’t particularly frightening in any way.

Sooners looking to bounce back after the bye

Two Saturdays ago, the Kansas State Wildcats stunned the college football world with a 48-41 upset victory over the Sooners. Nobody saw it coming, because until then, Oklahoma’s defense had largely managed to avoid anything close to that debacle of a meltdown. Now after a bye week, No. 9 Oklahoma has a chance to redeem themselves while staying alive in the race for the College Football Playoff.

Up next is a home game Saturday against an Iowa State team that won’t go down without a fight. We know Jalen Hurts, CeeDee Lamb and Co. will put points on the board. What we don’t know is whether defensive coordinator Alex Grinch has fixed what was broken the last time his Sooners took the field.

Will we see any late-night upsets?

There are a couple of potentially entertaining games on the slate late Saturday night. Wyoming is visiting Boise State, and on the West Coast San Diego State is hosting Nevada.

Both No. 22 Boise State and San Diego State have a good shot at winning the Mountain West with records of 7-1. They could be on a collision course for the Mountain West Championship Game. The Broncos will have their hands full going against a very good Wyoming team, though, and Nevada has shown it can put up points recently in a thrilling win over San Jose State.

Regardless of what happens, fans tuning in late should at least find some entertainment value in these two games.

Oh, and there’s this game in Tuscaloosa

The biggest game of the week. No. 2 LSU at Bryant-Denny Stadium for a date with No. 3 Alabama. This is absolutely huge, and the best part is it looks like Tua Tagovailoa is going to play after undergoing a minor procedure for his high-ankle sprain a few weeks ago.

This game has it all. Two Heisman Trophy contenders going at it on the same field in Tagovailoa and favorite Joe Burrow. Electrifying receivers and running backs on both sides. Playmaking defenders. Two of the most high-profile coaches in the nation. And it will culminate with one of the programs perhaps holding the top ranking heading into next weekend.

Amplifying the stakes all the more is that the losing team could end up missing the SEC Championship Game. Both reside in the SEC West, but only one can represent the division in the end. Obviously, there’s a chance that both could still end up in the playoff — we’ve seen it happen before. But winning the conference championship would obviously be a huge boost in the end.