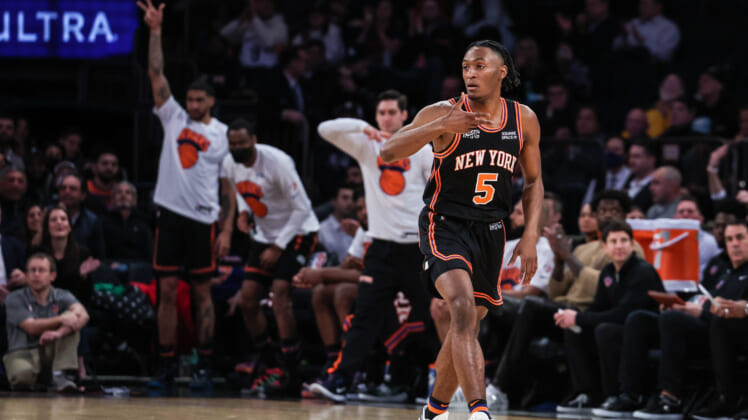 It’s trade rumor season, and we’ve got another report bringing up Quentin Grimes and RJ Barrett in a potential Donovan Mitchell deal.

We all know that Tom Thibodeau and Mark Berman are close. So is this Thibodeau’s way of letting Leon Rose and William “World Wide” Wesley know how he feels about the Donovan Mitchell trade discussions?

Thibodeau continued with his “vets first” way of coaching last season. The New York Knicks’ 37-45 record in his second year shows that’s not working for him. He let the world know he was not in favor of the Cam Reddish trade and left him out of the Knicks’ rotation. Much to the dismay of Wesley, who reportedly went straight to James Dolan to express his displeasure. Reddish was later put in the rotation but hardly received many minutes.

Now it’s RJ Barrett. According to Mark Berman of the New York Post, Thibodeau would prefer to trade Barrett over Quentin Grimes to the Utah Jazz to acquire Donovan Mitchell.

As a Knicks fan, thank goodness Thibodeau is not the President of Basketball Operations.

Coach Thibs has never hidden his feelings about Barrett

In a post-game press conference following a 113-99 loss to the Denver Nuggets, Tom Thibodeau proceeded to talk about Barrett needing to go back to the gym,

As his coach, Thibs was correct. Barrett needed to get back to the gym. But so did the entire team—especially the Most Improved Player and first-time All-Star Julius Randle.

Barrett was the only player on the team that took accountability and went to work to improve his game. We’re talking about the player who set a goal for himself, to be averaging 20 points per game by the end of the season, and did it.

Barrett continuously got better in each of his three years. He went from 14.3 points per game his rookie year to 20 points last season.

When drafted in 2019, the Knicks’ front office said RJ would be the face of the team. That front office consisted of Scott Perry and Steve Mills. But what was he the face of? A team that changed coaches every couple of years was fastly going nowhere—a team with no identity and no culture.

Barrett was finally on the team of his and his grandfather’s dreams. But, after Berman’s article, could it be his nightmare?

Quentin Grimes can be the catalyst to future success

Quentin Grimes could be a key piece in the Knicks someday going deep into the playoffs. Analysts claim that Donovan Mitchell could get them to the second round. But that won’t happen without a player like Grimes.

Donovan Mitchell can score, but he does not defend. Therefore, the Knicks will need a player like Grimes when it comes to defense. Grimes is the Knicks’ backup shooting guard. Unfortunately, we only were able to watch Grimes in 46 games last season but what we saw showed us that the Knicks had someone good who would be great. At the end of the season, Grimes had a field goal percentage of 40.4%, 38.1% from three, and 68.4% from the free throw line.

Of course, Danny Ainge wants him. Grimes is a 22-year-old version of Mitchell, and he plays defense. He could be an excellent player to rebuild with or around.

The Knicks’ Summer League team went to the Finals but lost to the Blazers’ SL team. They ended with a 3-2 record but couldn’t get past the Blazers and Trendon Watford in the Finals. Like the end of the season, Summer League showed the Knicks how good their young players are.

Why not wait until the trade deadline?

This is not a popular idea, but it could be a good one. At the trade deadline, the Knicks will know for sure what they will do. Bet on their young players or give them and their picks to Ainge.

The Knicks are no longer the desperate front office. At the moment. The result of this trade would be the deciding factor on whether the Knicks fans that currently believe in them continue to believe.