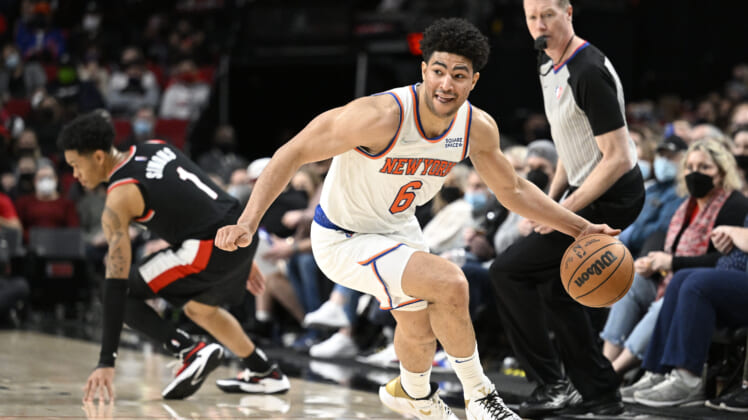 Quentin Grimes has been one of the main pieces talked about in an eventual deal the New York Knicks could make for Utah Jazz guard Donovan Mitchell, or any potential trade target. It’s all for good reason as well. As a very talented, young piece for the New York Knicks, Grimes would be a fantastic addition for any franchise looking to rebuild.

The Knicks front office typically goes for the splashy move in the trade market. Grimes should be someone the Knicks do not look to move, as the young guard has a bright future in the NBA.

Grimes is a physically huge guard. ESPN has Grimes listed at 6’4, 210 pounds. This makes him heavier than every member of the Knick’s backcourt, outside of RJ Barrett, to which Barrett has two inches on Grimes. When you look at him, he’s extremely broad, especially compared to his backcourt counterparts. Immanuel Quickley, Jalen Brunson, and Derrick Rose are all more slender guards and will have a very difficult time staying with bigger opponents.

In his rookie season, Grimes was a net positive for both defensive win shares and defensive box plus-minus despite only averaging 17 minutes a game. Per 36, he also would’ve averaged 1.4 steals per contest, good for third on the team. His defensive prowess is there, and he’s no slouch on offense. 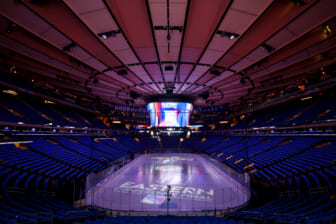 The NBA is progressing more towards the large guard format, with the best ball handlers being lead playmakers, no matter the size. The Knicks are going to need a larger guard to step up and guard swing players with size so that Barrett doesn’t need to shoulder all of this load, while also being a primary scoring option.

Grimes is the perfect man to do this. He’s a hard-working player who should see more minutes this season due to his ability to guard more positions than most of the Knicks’ backcourt. This will all be dependent on head coach Tom Thibodeau and how he doles out the minutes for the backcourt.

Offensively, Grimes’ efficient field goal percentage was .557%, good for sixth on the team, and the highest amongst any of the guards. Before getting injured, his minutes suffered under the reign of Tom Thibodeau, who never plays rookies. His usage rate was around 15.1, which ranks just ahead of Miles McBride on the roster, somewhere near the cellar of all the normal rotation players.

Grimes is going to be injected into the lineup for his defense, but with the increased minutes and usage, I would project his stats to balloon over the season. Just with an uptick in usage, Grimes could average 13 points, four assists, and four rebounds, while shooting efficiently from all over the floor. 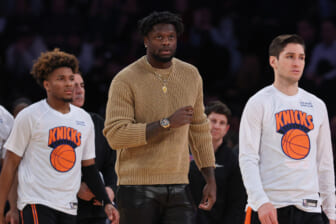 The only glaring weakness Grimes has offensively is his free-throw shooting. However, historically, players that shoot well from three, and struggle at the free throw line early in their career, end up bumping that percentage up as they mature in the league.

Grimes had an amazing Summer League for the Knicks. Say what you will about the Summer League, all of the elite young players are trying to make a name for themselves in these games. Grimes averaged 22.6 points, 4.2 rebounds, 4.0 assists, and 1.2 steals per contest during the five games that he played. He was named to the 1st team of the tournament while leading the Knicks to the championship game against Portland.

In college, Grimes, lead the Houston Cougars team to a final four appearance during his final season at the school, where they lost to eventual champions Baylor. He won co-AAC Player of the Year the same season and was named Mr. Basketball in Texas his senior year of high school. He was ranked as the number eight recruit during high school as well and has consistently performed at a high level. 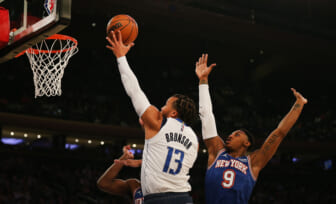 There are intangibles that can’t be taught to players at such a high level. Grimes has always been an overachiever, and all signs are pointing up for his Knick’s future. It would be smart for the Knicks front office to let the start of the season play out with Grimes, and not move him in a potential deal.