Years after he last played in the NFL, Hall of Fame quarterback Peyton Manning is still being trolled by his friend and rival Tom Brady. This time, Brady is taking a not-so-subtle jab at Manning’s forehead on social media.

As Brady prepares for the 2022 NFL season, he is still spending some time strengthening his brand on Twitter and demonstrating why could offer a lot of personality as a broadcaster.

During a recent workout, the 44-year-old quarterback used a unique camera angle to record what he is doing. With the camera aimed directly at his head, greatly enlarging his forehead, Brady dubbed it the “Peyton angle’ while teasing that it is from TikTok.

Related: Bruce Arians says he would still be coaching if Tom Brady retired

Brady does have a history of taking shots and often besting his rival. The popularity of the ManningCast, hosted by Eli and Peyton Manning, helped the brothers land a massive contract from ESPN this offseason. Months later, Brady agreed to join the broadcast booth with Fox after he retires with a massive contract that blows past what Disney will pay the Manning brothers.

All of this is fitting for Brady, who went 11-6 in his career against his greatest rival. As Peyton enjoys retirement, Brady retired and then returned weeks later with a shot to win his eighth Super Bowl and second with the Tampa Bay Buccaneers.

It should come as no surprise that Eli Manning loved Brady’s dig at his brother. We’ll have to wait and see if Peyton responds to this troll job. 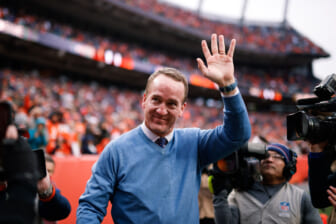