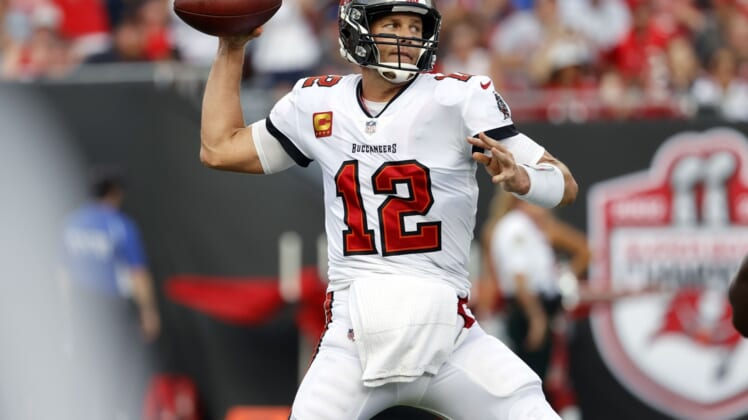 Leading 28-25 as the fourth period started, the Buccaneers (2-0) pulled away as Brady hit Chris Godwin for a 12-yard touchdown with 9:18 left. Edwards picked off Matt Ryan less than 90 seconds later and lugged it 31 yards to make it 41-25. Edwards sealed the outcome with 4:01 remaining with a 15-yard interception return.

Brady completed 24 of 36 passes for 276 yards and has thrown for nine scores in the first two games. Ten different receivers caught at least one pass, with Mike Evans grabbing five for 75 yards after being limited to three by Dallas on Sept. 9.

Matt Ryan had a good game going for Atlanta (0-2) until the late interceptions. He finished 35 of 46 for 300 yards and two scores, but also tossed three picks. Calvin Ridley caught seven passes for 63 yards and a touchdown in the losing effort.

The Brady-Gronkowski pairing got Tampa Bay off to a 14-0 lead before the second quarter was a minute old. They capped the Buccaneers’ first possession with a 20-yard touchdown strike less than three minutes into the game, then finished their second scoring drive with a 1-yard pass 53 seconds into the second quarter.

Atlanta got on the board on its ensuing possession when Cordarrelle Patterson ripped off a 10-yard touchdown run with 11:48 left, but Brady made it 21-7 on a 3-yard scoring strike to Evans with 43 seconds left. Younghoe Koo made a 36-yard field goal as time expired to pull the Falcons within 21-10.

After Brady and Evans hooked up on a 1-yard touchdown just over two minutes into the third quarter, Atlanta made its move. Ryan found Ridley for a 3-yard scoring connection with 6:35 remaining, then hit Patterson on a 7-yard touchdown pass with 1:45 showing to make it a three-point game.