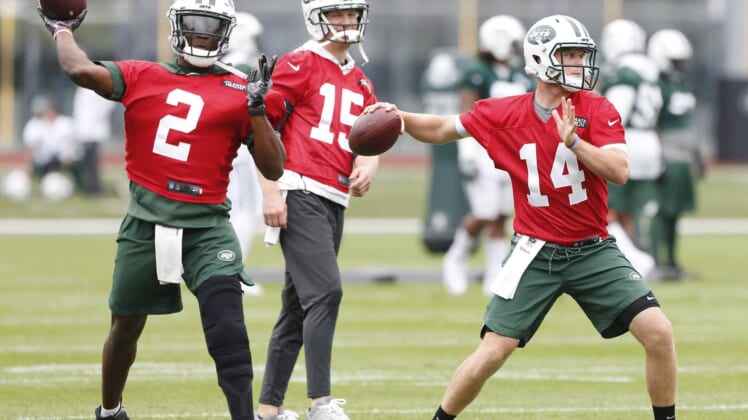 While New York Jets quarterback Sam Darnold signed his rookie contract on Monday and was greeted by applause from teammates, he has plenty of ground to make up on the depth chart.

After practice on Monday, Jets’ coach Todd Bowles told reports that Darnold is currently third on the depth chart behind Josh McCown and Teddy Bridgewater.

Todd Bowles made his depth chart clear (again): McCown, Bridgewater, Darnold. McCown is not here solely to be a mentor. And, as Bowles noted, McCown mentors his teammates at different positions & on both sides of the ball. #NYJets

Plenty of time remains for the rookie to prove himself and deliver on offensive coordinator Jeremy Bates’ remarks earlier this offseason that Darnold could start as a rookie.

However, this is an opportunity that Bowles will make him earn every inch of. Fortunately, training camp should provide Darnold with plenty of opportunities to see snaps and push Bridgewater for the backup spot.

From there, Darnold will have his shot in the preseason to demonstrate why he should be New York’s starting quarterback when the season begins. Until that time, McCown will be a leader in the quarterback room and lead in first-team reps.