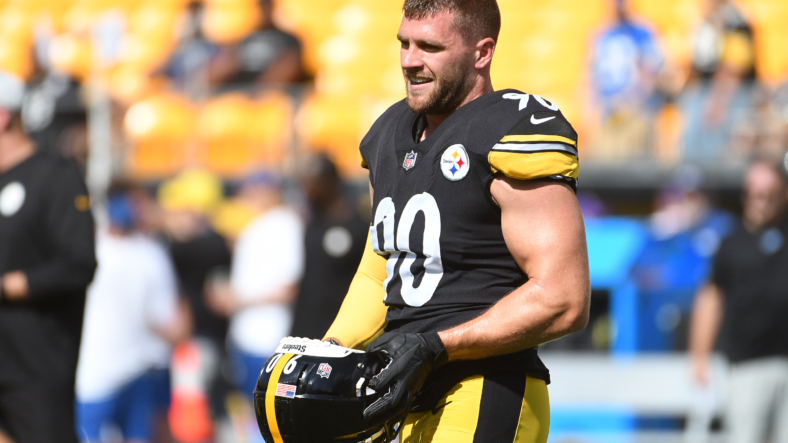 The Pittsburgh Steelers defense has been in mid-season form, forcing five turnovers as they take on the reigning AFC Champion Cincinnati Bengals in Week 1. Leading the way, as usual, has been 2021 Defensive Player of the Year T.J. Watt.

He racked up six tackles (three for loss), two pass deflections, one QB hit, and his first sack of the season. Unfortunately, that lone sack might be the only one he gets this season.

Late in the back-and-forth battle, which went into overtime, Watt was seen leaving the field saying what many believe reads as “I tore my pec.” Here’s the clip for all the lip-readers out there.

Watt went back to the locker room after the play, where he underwent a medical evaluation. He was ruled out for the game shortly after.

We should be getting an injury update on Watt at some point on Monday, likely after results of an MRI comes back.

We don’t like to speculate on injuries. Watt’s no doctor either, but his words are all we have to go off of at this time. If Watt’s correct in believing he actually tore his pectoral muscle, it would be a catastrophic blow to Mike Tomlin’s defense.

Typically torn pecs wipe out a player’s season. His older brother, J.J., tore his pec back in Week 8 of the 2018 season, he missed the rest of the year and hasn’t topped 10 sacks in a season since.

It remains to be seen, what the official injury diagnosis for Watt is in 2022, but the Steelers could be without the NFL’s sack leader for the past two seasons for the rest of their matchups this year.

Without Watt, the Steelers will likely turn to fourth-year pro Malik Reed, who’s tallied 13 sacks in the past two years.

Related: 2022 NFL defense rankings: How does the vaunted Steelers defense stack up?