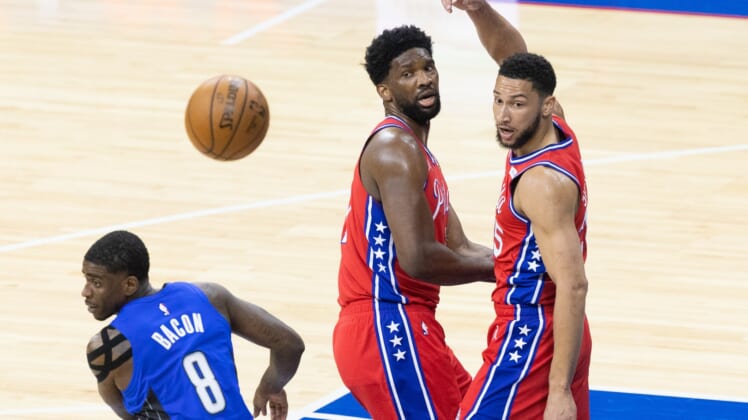 All that tanking. All those high draft picks. All that promise. The Philadelphia 76ers‘ bold paradigm known as “The Process” has officially failed after their 103-96 loss in Game 7 to the Atlanta Hawks on Sunday.

It took four years of dreadful losing for this process to come to fruition. In the four seasons since those dark times, the 76ers have failed to reach the Eastern Conference Finals.

Time to blow this thing up and eradicate almost all the remnants of “The Process.” Yes, that includes Ben Simmons. It turns out, a modern point guard who can’t shoot (Simmons) is a liability that can’t really be masked.

Let’s look back at what went wrong in “The Process” and how Philadelphia can fix it.

The idea of zigging while the rest of the NBA zags is commendable in principle. In fact, for an otherwise-hopeless NBA team, even with the draft lottery looming as a threat, losing is the fastest way to get a crack at drafting the next superstar.

If you’re not a premier free-agent destination, it’s challenging to recruit top-tier talent. All this makes sense. Philadelphia was ultimately doing the right thing for its long-term benefit. It was the execution that left much to be desired.

Yep, even as the NBA was obviously shifting to a more perimeter-oriented game heavily dependent upon 3-point shooting, the 76ers sought out size. For some reason, at the dawn of that brave, new Sixers era spearheaded by Sam Hinkie, the strategy was to collect as many big men as possible in the draft lottery.

This began with the draft day trade for Nerlens Noel in 2013. He didn’t pan out, and has already been on four different NBA teams at age 27.

The selection of Joel Embiid in 2014 at No. 3 overall is arguably the only premium asset Philadelphia truly hit on, but even then, Embiid missed his first two NBA seasons due to injuries.

From there, what did the Sixers do? Took Jahlil Okafor at third overall in 2015. He was a bust, too.

May it be said again how obvious it’s been that the NBA is extremely reliant on perimeter-heavy offense and 3-point shooting. Having a surplus in the frontcourt is a luxury. Far from a necessity.

If you can believe it, even with the aforementioned plethora of big men, the Sixers drafted…

Are you ready for this?

Not one. Not two. Three. Lead guards. Whose jump shots were completely broken:

Granted, Fultz got the yips once he went to the NBA, not while he was in college, and he’s at least worked back to some sort of respectability on the Orlando Magic. Nevertheless, the point stands.

Carter-Williams barely shoots over 40% for his NBA career, and hits at 25.5% from downtown. Simmons and Fultz have had the most mind-boggling meltdowns in recent basketball history when it comes to shooting form and touch.

And as these NBA playoffs proved, Simmons is incapable of shooting a perimeter jumper, and has psychologically unraveled at the free throw line like Fultz once did before him.

Isn’t that insane to realize? Carter-Williams, Simmons and Fultz. Shots broke as a joke.

How Philadelphia 76ers can end The Process nightmare

They can start by trading Ben Simmons. That’s the biggest, most impactful move Philadelphia can make, and it’s one that must happen so that this franchise doesn’t stay married to a course of action that isn’t yielding results.

Some team is going to covet Simmons’ star power, defensive versatility, ability to crash the paint and his exceptional passing ability. Let him fix his broken jumper and free throw stroke somewhere else.

Embiid really needs to figure out how to stay healthy. Maybe it’s not possible at this point given the lengthy list of injuries he’s dealt with. No matter. He’s too special, skilled and dominant on both ends of the floor to justify giving up on, no matter how appealing a trade offer might be.

The thing is, these Sixers aren’t far away. They’ve actually done a decent job acquiring talent to support Embiid and Simmons. However, it’s become abundantly clear that Simmons’ shortcomings are too glaring to hold up in the playoffs if Embiid is the other pillar Philly is building around.

Philadelphia just needs a different player to run the point. Simmons can return at least a decent star in a trade.

Putting either another veteran floor general or a dynamic stretch 4 who can score alongside Embiid, Tobias Harris and the rest of the Sixers’ younger core would make for a legit contender in Philly. Simmons just ain’t it.

Say goodbye to The Process. The Philadelphia 76ers gave it a great run. They just failed to execute.