The Open Championship at Royal St. George’s in Sandwich, England, begins Thursday players navigating not only the links course but also the stricter-than-usual pandemic restrictions.

The Open was the only major to be outright canceled rather than postponed in 2020 during the spread of COVID-19.

On one hand, players are happy to be back at the historic championship. But more than a few have raised eyebrows over the R&A, which organizes the Open, implementing tighter restrictions than what players have gotten used to stateside.

Each player is spending the week in a four-person bubble that includes only the player, his caddie and two other support personnel of his choice. Restaurants, pubs and even grocery stores are off-limits — golfers and their teams can only go from the course to their lodging.

As of Tuesday, 17 players have withdrawn, including seven top-100 players.

Their reasons have been varied, but are all more or less pegged to the pandemic and the tight schedule. Masters champion Hideki Matsuyama of Japan quarantined after a positive COVID-19 test on July 2 and opted not to try to make the trip without enough practice time beforehand. Bubba Watson was a close contact with someone who contracted COVID.

So who will be there? There’s still an irresistible selection of the game’s biggest stars, from Rory McIlroy to Phil Mickelson to the ever-feuding Brooks Koepka and Bryson DeChambeau.

Koepka said the course is “not as exciting” as other Open venues.

“[But] I don’t care whether I like the place, don’t like it. You’ve still got to play good and go hit the shots. Playing St. Andrews is probably my favorite place in the entire world to play. Portrush two years ago was … I love that place. I thought that was just such a good Open. A fun golf course to play. Really enjoyed that. 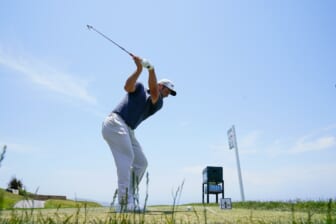 A month after winning his first major title at the U.S. Open, Jon Rahm enters the week as the favorite, +700 on DraftKings as of Tuesday. Jordan Spieth (+1400) and Koepka (+1600) are just behind.

The par-70 course in the southeastern county of Kent isn’t especially long at 7,189 yards, but it will trap many players in its penal bunkers and dunes. The par-4 fourth hole includes a bunker known as the “Himalaya,” an incredibly tall and deep bunker players will need to clear off the tee. Nos. 7 and 14 are the only par-5 holes on the course; the latter is called the “Suez Canal” for its ditch that crosses the 14th fairway.

“The biggest thing here is even before the rain yesterday, the course was quite lush, quite green,” McIlroy said. “We maybe weren’t getting the bounces that we’re accustomed to getting here at St. George’s with the bumpy fairways, and honestly I think the course plays a little better that way … As the days go on, with a little bit of wind and sunshine, by the weekend it should be absolutely perfect.”

The last three times the Open was contested at Royal St. George’s, the champions were Northern Ireland’s Darren Clarke (2011) with a winning score of 5 under, Ben Curtis (2003) at 1 under and Australia’s Greg Norman (1993) at a much lower 13 under.

Irishman Shane Lowry won the 2019 Open with a third-round, 8-under 63 propelling him to a six-stroke victory. He’ll aim to be the first player since countryman Padraig Harrington to successfully defend his Open title.

Lowry had an extra year to keep the Claret Jug, but understandably, he said he wasn’t ready to give it back quite yet.

“I don’t like using cliches (but) it’s another golf tournament, it’s another major,” Lowry said. “Obviously there’s going to be high pressure at certain stages. You want to go out there and do as best you can. I’ve got a lot more on my mind, a lot more to play for than just defending the trophy.

“To be announced on the first tee as defending champion, I’ll be happy obviously to get that tee shot away, and if you’ve seen the rough down the first hole, I’ll be happy if it’s on the fairway … Yeah, I have no idea, but I’m kind of going into this week with an open mind.”

Also Read:
What makes each of the four golf majors unique?

A maximum of 32,000 fans will be allowed on the grounds per day, though it’s irritated some players in the field that spectators won’t be subject to nearly the same protocols that the golfers will.

“I think it’s a little silly to let in 32,000 fans but to treat the players differently,” Brian Harman told ESPN. “That’s the frustrating part. I know the R&A kind of has their hands tied, but we’ll go over there and we’ll make the best of it.