Jon Rahm is the top-ranked golfer in the world, and just won his first major at the U.S. Open last month, which has thrust him even more into the spotlight.

As he prepares to potentially win back-to-back major titles at The Open Championship, Rahm held court with the media on Tuesday, and addressed his unconventionally short backswing for the first time on record. It turns out, there’s a very strong reason Rahm swings the way he does.

Per ESPN.com’s Bob Harig, Rahm explained that he was born with a club foot, with his right foot at a 90-degree angle to the left, requiring multiple trips to the hospital.

“I have certain unique parts and certain physical limitations that let me swing the way I swing. […] from the knee down my leg didn’t grow at the same rate. So I have very limited ankle mobility in my right leg. It’s a centimeter and a half shorter, as well. […] I learned at a very young age that I’m going to be more efficient at creating power and be consistent from a short swing. If I take a full to parallel, yeah, it might create more speed, but I have no stability. My ankle just can’t take it.”

That’s pretty remarkable. Golf is a hard enough game, and it’s difficult to work out a consistent swing to rise to the ranks of the world’s absolutely elite professionals. From the beginning of his life, Rahm had an uphill battle to succeed in the sport, only to eventually reach the highest level at a young age.

Still only 26 years old, Rahm has already won five and six times respectively on the PGA and European Tours in regular tournaments. No triumph was greater than his performance at Torrey Pines, as Rahm finished birdie-birdie to claim the U.S. Open. 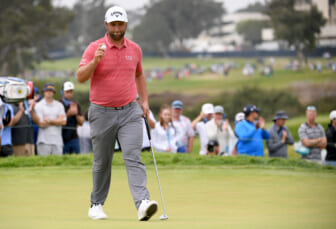 Rory McIlroy was the last golfer to win back-to-back major when he pulled off the feat in 2014 at The Open and in the PGA Championship. It’s quite rarely seen, but if anyone can do it, Rahm seems to fit the bill.

Rahm is a phenomenal ball-striker who ranks second in strokes gained: off the tee and seventh in strokes gained: approach to the green on the PGA Tour this season. His putting continues to improve, and his excellent hands translate to an excellent short game, as Rahm can easily bail himself out of trouble often.

In addition to the phenomenal stateside campaign Rahm is having this year, he’s coming off a seventh-place finish at the Scottish Open, where he was just two strokes outside of a playoff. Thus, he’s arriving at the 2021 Open Championship at Royal St. George’s in fine form.

DraftKings lists Rahm as the favorite at The Open with +700 odds. McIlroy (+1800) is a No. 4 co-favorite alongside Dustin Johnson and Xander Schauffele. The other top contenders are Jordan Spieth (+1400) and Brooks Koepka (+1600).

Links-style golf is something Rahm is very familiar with, and his game from tee-to-green is dialed in well enough for him to hoist the Claret Jug. It’ll just come down to whether he can make enough putts, which was his undoing this past weekend.

Whatever happens from here on out this week and for the rest of Rahm’s career, he’ll likely be a Hall of Famer and multiple major champion, which is all the more impressive considering how he willed himself to a unique swing and glory on the golf course. 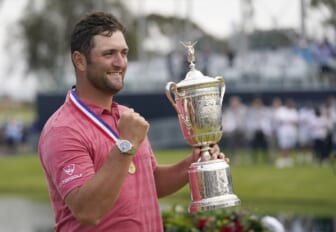