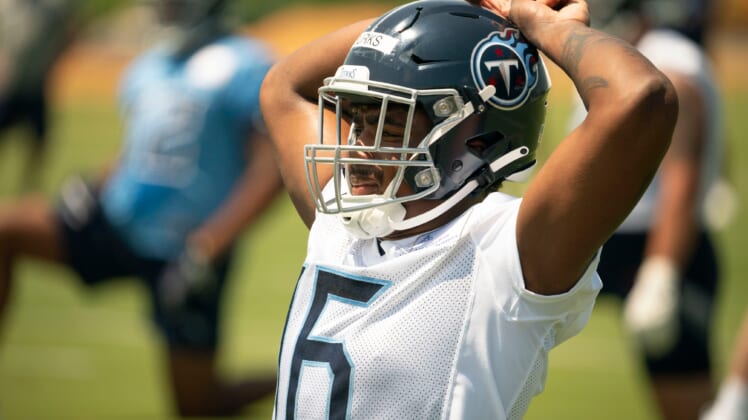 If Tennessee Titans head coach Mike Vrabel was upset with general manager Jon Robinson for trading Pro Bowl wide receiver A.J. Brown, he won’t be any happier with the front office after the first day of rookie minicamp on Friday. Treylon Burks, widely presumed to be Brown’s immediate replacement following his selection with the 18th pick in the 2022 NFL Draft out of Arkansas isn’t off to the best start, to say the least.

According to Paul Kuharsky, Burks, participating in his first NFL practice at rookie minicamp, didn’t make it through the first wide receiver drill. Burks was seen experiencing difficulty breathing toward the beginning of practice, eventually using an inhaler, and ended up heading inside with a Titans trainer.

What’s going on with the Titans’ new potential WR1?

As for coach himself, Vrabel was asked about how Burks handled today’s practice and he didn’t exactly hold back, but he didn’t sound overly upset this early with his first-year pro.

“I think it’s hard to think that they can recreate, with a trainer, how we do things, and we see that with guys that have come back and started with our offseason program and guys that have joined a few weeks in. It’s just different. I know that they’re working, and they think they are trying to get in shape, but that’s just not the case. That’s something we have to focus on and try to make sure we’re getting some work in, but with all of them, we’re trying to be as smart as we possibly can.”

To be fair, it’s the first day of practice. Despite having trained and worked out on their own for months, it’s been nearly six months since Burks has played in an actual football game in Arkansas’ win over Missouri on Nov. 26, 2021.

Fans shouldn’t panic when it comes to Burks. It’s safe to say, with Vrabel on the staff, Burks will be in shape in no time, ready for the start of the regular season. But this isn’t how he wants to start with his new team.