A recent study by USA Today shows just how little college athletes get back in terms of the amount of revenue they bring in to athletic departments around the nation (h/t Business Insider).

In 2013, the top ten schools in college sports generated an average of $117.7 million revenue from their athletic department.

According to the data, schools that make the most money on college sports spent an average of just over $12 million on scholarships last year. Looking further into the statistics, the study concluded that coaching staffs received the ‘largest slice of the pie’ at $42 million in 2013. 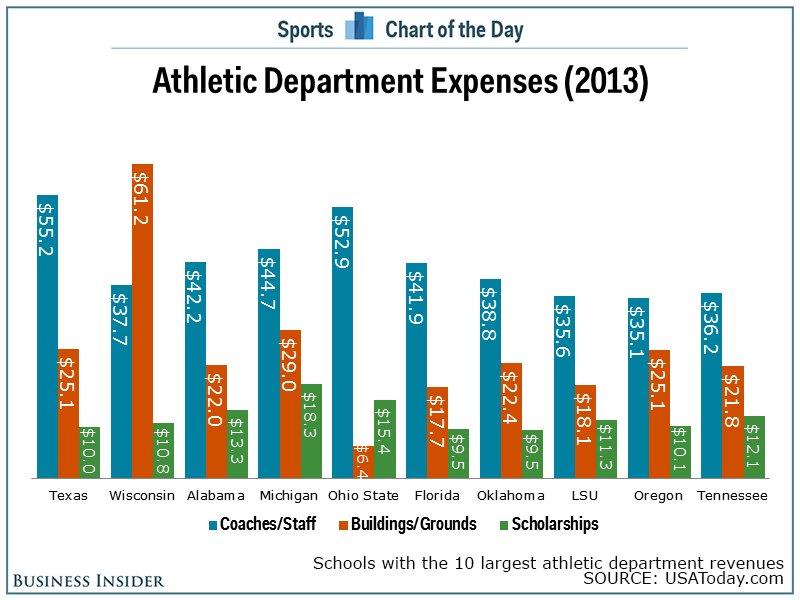 Looking at the data above, Ohio State and Texas spent the most on coaching staffs, while Michigan allocated the most to scholarship athletes. Even then, the splits are pretty equal all the way around.

There has been renewed talk in recent years that student-athletes (mainly basketball and football players) should receive some sort of stipend. Advocates for this point to the idea that these athletes bring in a nice chunk of the revenue schools see on a yearly basis. Opponents conclude that paying athletes would take the term amateur out of the equation.

But let’s be honest for one second here. A stipend that enables athletes to be able to live a decent college life (maybe $800 a month) wouldn’t necessarily (despite the definition of the term) turn them into “professionals.” In addition to this, no one can argue that Oklahoma head coach Bob Stoops brings in more revenue than some of the star players on his national-championship contending team.