Studs and duds from Super Bowl 50

As we look back at what was a physical game between two teams that featured elite-level defenses, one thing becomes abundantly clear. The Denver Broncos prepared themselves much better for Super Bowl 50 than the Carolina Panthers did.

From a schematic standpoint, Wade Phillips and the Broncos defense had the Panthers on skates throughout the entire game. That’s the primary reason Denver came away with an upset 24-10 win over the NFC champions.

Within the broader game itself, Panthers quarterback Cam Newton struggled to do anything of substance against a dominating pass rush that included former Defensive Player of the Year Von Miller and future Hall of Famer DeMarcus Ware.

Here are your biggest studs and duds from Super Bowl 50.

To say that Miller upped his free agent stock during the playoffs would be a major understatement. Including the 2.5 sacks he racked up in a MVP performance in the Super Bowl, Miller recorded five sacks in three postseason games.

Miller started Super Bowl 50 with a bang, forcing a Cam Newton fumble midway through the first quarter. That play resulted in a Broncos touchdown, and an early 10-0 lead against Carolina (watch here).

Then, in the fourth quarter with the Panthers still down just one score, Miller busted into the offensive backfield once again. He forced yet another Newton fumble, pretty much sealing the win for the Broncos.

It’s this type of dominating performance that enabled Miller to become just the eighth defensive player ever to earn Super Bowl MVP honors. It will also likely catapult him into the ranks of the highest-paid players in the league.

As good as Saturday night might have been for the MVP, Sunday likely represented the low point of Cam’s career. From a tremendously poor performance on the field to immature antics after the game, Newton wasn’t shown in the best of lights on the game’s grandest stage.

When all was said and done at Levi’s on Sunday night, Newton completed just 44 percent of his passes without a touchdown. He missed open receivers throughout the game, held on to the ball too long and showed a level of inaccuracy we didn’t see much during his MVP season.

It would be foolish to conclude that the stage was too big for Newton. What we do know is that he failed at every turn with the eyes of the entire football world on him. That’s going to leave a sour taste in the quarterback’s mouth moving forward.

No one can say that Carolina’s defense didn’t come to play in Super Bowl 50. It held the Broncos to less than 200 total yards and 11 first downs in the disheartening loss.

And in reality, Ealy was the team’s best defensive player. He recorded four tackles (three solo) and a whopping three sacks in a downright dominating performance.

Showing just how versatile he is, the former Missouri standout also dropped back into coverage and picked off Manning (watch here) deep in Carolina territory with his team down one score late in the second quarter. It was a huge play that should have given his team some momentum heading into the half.

As bad as Carolina’s performance was Sunday night, it might have very well found yet another star in this former second-round pick.

Ealy had struggled to make much of an impact in his first two NFL seasons, recording a total of nine sacks in 31 regular season games. If he can use this performance as a way to propel himself into being a more consistent player, that will be huge for the Panthers moving forward. 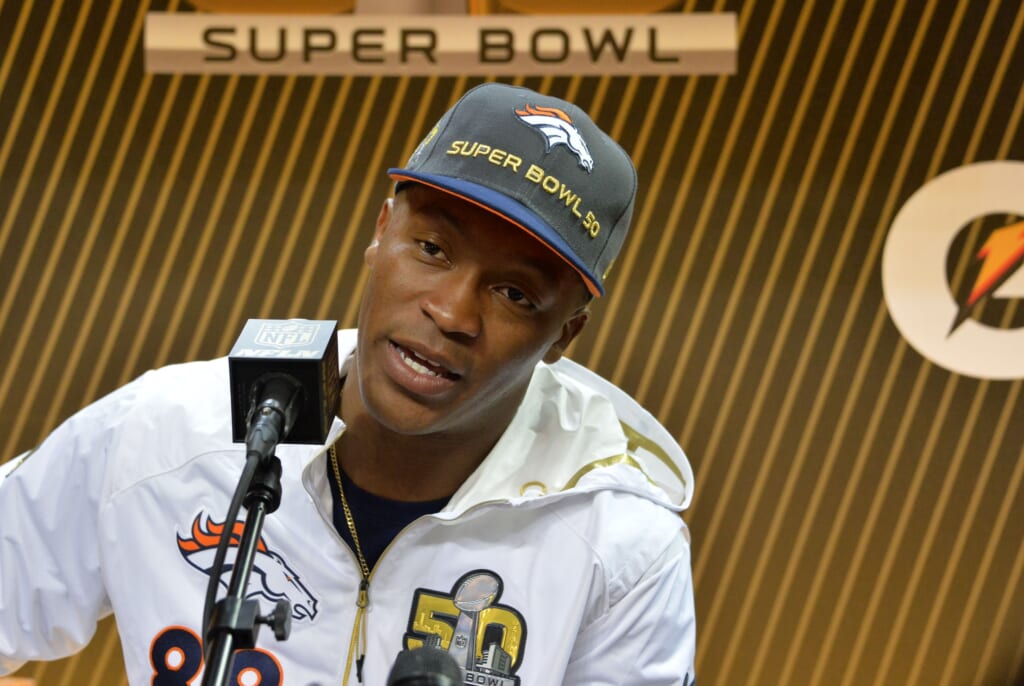 If it wasn’t for the Broncos’ defensive performance, there would have obviously been some major questions lobbed at the team’s offense. Among those questions was the performance of a receiver that broke Super Bowl records the last time he suited up in the big game.

Taking on a corner in Josh Norman, who was among the best players at his position during the regular season, Thomas recorded a total of one catch for eight yards on six targets.

It’s obviously going to raise some major questions about the receiver’s ability to repeat his Pro Bowl performances from 2012-2014, especially if Manning does indeed call it quits.

Remember, Thomas put up just 37 receptions for 492 yards in the seven regular season games Manning did not start this past year.

When Miller and Ware are at the top of their games, the Broncos defense is as good as any we have seen in the recent history of the game. That much was magnified Sunday night against the Panthers.

With Wade Phillips earning the Assistant Coach of the Year award and the two pass rushers expected to return to Denver next season, there is no reason to believe Ware can’t continue to put up huge performances for the defending champs down the line. At 33 years old and with 11 years of NFL experience under his belt, that’s a pretty amazing conclusion to draw.

Remmers didn’t stand a chance against the onslaught that the Broncos pass rush brought. Tasked with lining up opposite Miller, the right tackle was continually thrown into the offensive backfield throughout the evening.

It’s a shame that Newton’s offensive line couldn’t do him any favors in a game that was defined by Denver’s domination in the trenches. All said, Remmers allowed 3.5 sacks and six quarterback hits in the game.

Based on his up-and-down regular season performance, it wouldn’t be too much of a surprise if the Panthers looked to upgrade at the right tackle position. That wouldn’t have been the case if Remmers had at least held his own in the Super Bowl. In reality, Sunday’s game could have cost the veteran his starting job. 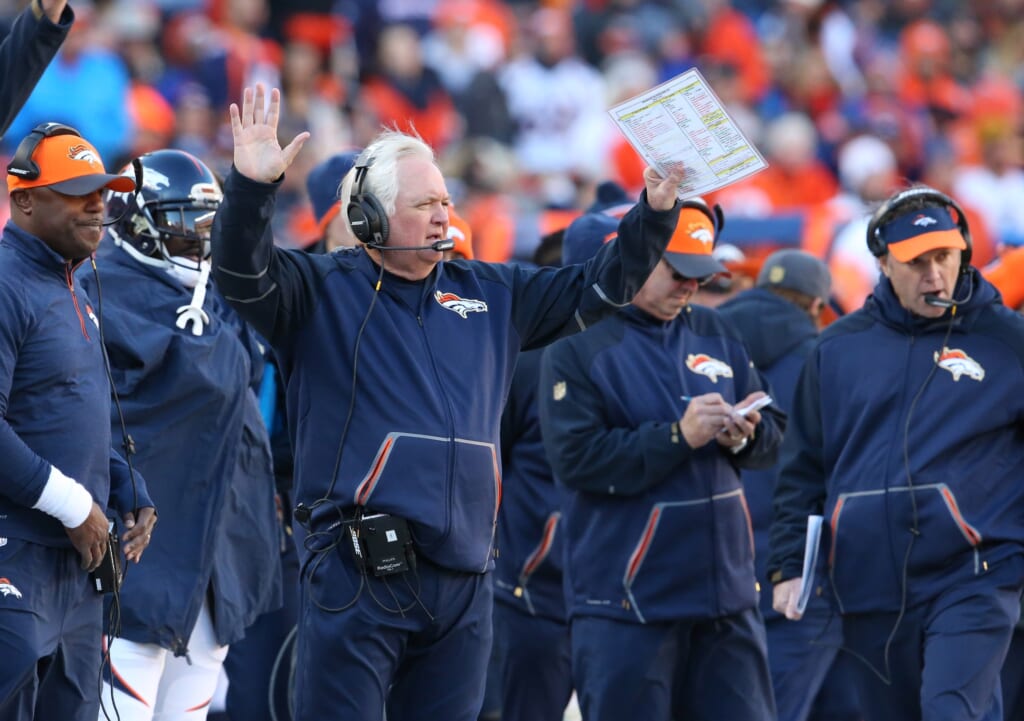 Give Phillips two weeks to prepare, and he will have you ready to play. Schematically, the veteran coach absolutely torched his counterpart from Carolina. And in reality, it wasn’t even much of a competition.

Showing looks and blitz packages the Broncos had not displayed during the regular season, Phillips kept the Panthers offense off track throughout the game.

Outside linebackers rushing from the middle, defensive tackles rotating outside, corner blitzes, Von Miller dropping back into coverage against wide receivers. This all played a role in one of the most well executed defensive schemes in the modern history of the NFL.

In that, Phillips continued to show himself to be a genius on the defensive side of the ball. This is how good his game plan was heading into Super Bowl 50.

On the flip side, Shula was completely over-matched against his veteran counterpart. Carolina would have been fine if it had decided to dumb down the playbook. Instead, it tried to get too fancy against a Broncos defense that was seemingly prepared for everything thrown its way.

We have to wonder why the Panthers continued to go with deep drops from Newton with the pressure the MVP was facing in the first half. Then, when the second half came calling, Shula and Co. failed to make the necessary adjustments.

That’s the major fail here. If something is consistently not working, why not attempt to change it up mid stream? This is something Shula had done throughout the entire season. It’s also something he failed to do on Sunday. That shouldn’t be acceptable to the Panthers.