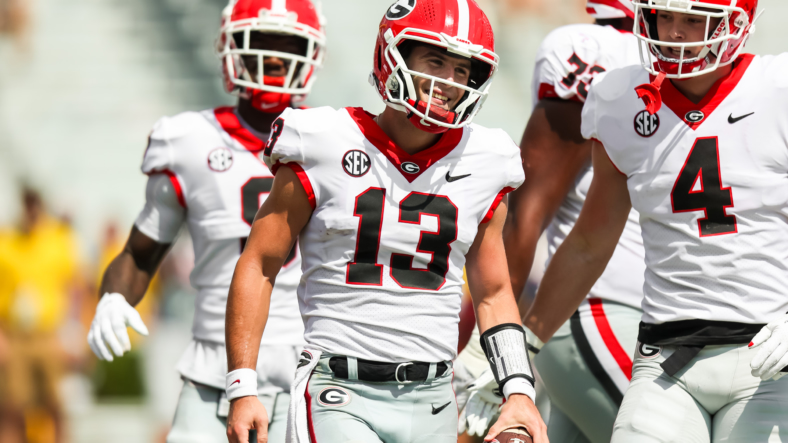 Georgia Bulldogs quarterback Stetson Bennett is one of the best stories in college football. He transferred from Jones County Junior College to become a walk-on at Georgia, eventually leading the Bulldogs to a victory over Alabama in the College Football Playoff National Championship Game. As the Georgia native looks to repeat his success from a breakout 2021 season, NFL scouts are keeping a close eye on his progress.

A lot has changed in just over a year. The Bulldogs held a quarterback competition between Bennett and J.T. Daniels in 2021, alternating starts between the two early last season. Bennett eventually took over as the starter and never looked back, throwing for 313 yards in a 34-11 CFP Semifinal victory over Michigan and then snapping the Bulldogs’ 41-year title drought in the title game.

The reigning national champion entered the 2022 season as the unquestioned starter at Georgia. However, few around the NFL believed he had a future at the next level. Now, that all seems to be changing.

According to Doug Kyed of Pro Football Focus, NFL scouts and executives view Bennett as one of the rising prospects in the 2023 NFL Draft. Many viewed him as an undraftable player heading into Week 1, but projections have improved and there is now a realistic chance he is drafted.

Bennett is one of the best college football quarterbacks in 2022 and a big reason why Georgia is off to an undefeated start and atop the top-25 college football rankings. However, there are several concerns with the experienced Bulldogs’ signal-caller that diminish his draft stock significantly compared to his peers.

Bennett is a national championship and his winning record as a starting quarterback in the SEC will check off some boxes for evaluators. While those are a few things coaches place some emphasis on, general managers and scouts identify far more issues that cloud Bennett’s future in the NFL.

Georgia lists its starting quarterback at 5-foot-11 and college football teams are typically very favorable with their measurements. When Bennett is either measured at the 2023 NFL Scouting Combine or at the Georgia Pro Day, there’s a realistic possibility he comes in at 5-foot-10. While it is the same official height as Arizona Cardinals quarterback Kyler Murray, the NFL star makes up for it with exceptional arm strength and elite athleticism. 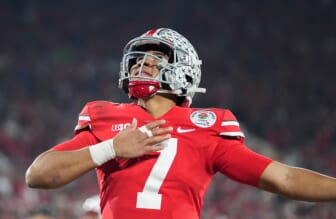 It’s certainly not the only knock on Bennett. While multiple NFL talent evaluators told Pro Football Focus that they have been impressed by the senior quarterback this season, his performance hasn’t erased some of the concerns around his game.

He greatly benefits from playing behind a strong offensive line with future NFL stars at tight end. It’s a similar dynamic to what Alabama quarterbacks have experienced, but scouts were far more sold on the physical talents of Jalen Hurts, Mac Jones and Tua Tagovailoa.

Unfortunately for the sixth-year senior, age is also working against him. Bennett turns 25 on October 28, meaning he would become a 26-year-old rookie during the 2023 NFL season. The advanced age is a detriment to his room for growth as a player and will push him even further down draft boards.

There is still plenty of season left ahead for Bennett to leave an even stronger impression on evaluators. Winning the Heisman Trophy and leading the Georgia Bulldogs to another national championship would certainly improve his draft stock, especially when NFL coaches get involved this offseason. However, Bennett is likely staring down a future as a Day 3 pick in the 2023 NFL Draft who fights for a job as a backup quarterback early in his career.