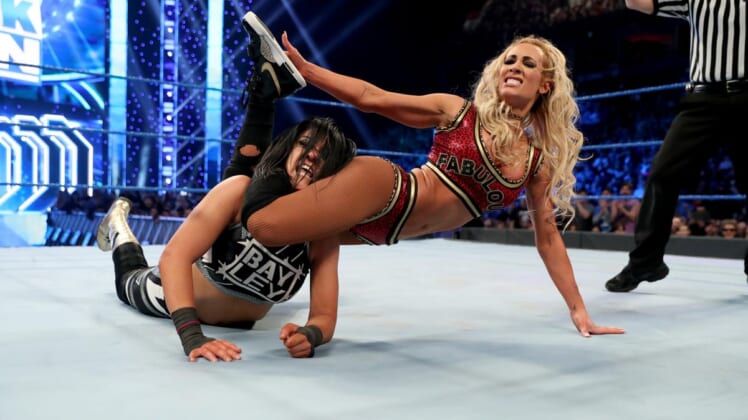 WWE Super ShowDown is only one week away. Fans in Saudi Arabia will be treated to another intriguing card next week with members of all brands participating in this event. SmackDown Live will be front and center by bringing the stars of the blue brand to the King Fahd International Stadium in Riyadh, Saudi Arabia next Thursday, Feb. 27, 2020.

This week’s episode of WWE Friday Night SmackDown comes to us live from Phoenix, Arizona on FOX this Friday at 8pm EST/7pm CST. The go home episode of SmackDown Live before Super ShowDown is sure to bring some fun storylines for the superstars of the SmackDown brand.

Goldberg and The Fiend face off

Bray Wyatt has been on a roll the last two weeks. After two epic Firefly Fun House segments, we will finally see Goldberg and The Fiend come face to face this week. The first face-to-face confrontation between these legends will surely create some compelling content you will not want to miss.

Finally, Carmella said she is getting another shot at Bayley’s title even after she lost to Bayley last week. What is going on here, WWE? This is some strange and confusing booking yet again by the WWE creative team.

Are we ever going to get some new feuds?

WWE Intercontinental Champion Braun Strowman is still fighting Shinsuke Nakamura and his crew week after week. Nakmura will rematch Strowman next week at Super ShowDown. Also, King Corbin will get another match with Roman Reigns at Super ShowDown.

I have no idea why these storylines are continuing for this long. This is another WWE creative team decision that I fail to understand. Has anything been gained from drawing these feuds out this long?

Why recycling feuds is bad: Corbin and Reigns have been feuding since late 2018. Nakamura and Strowman have had an ongoing feud for months with minimal fan interest. Recycling storylines and lazy booking is a huge reason why WWE’s ratings are lower than ever. Free advice to the WWE. Stop recycling feuds and storylines that people have little interest in. Ratings are dropping week after week because of stuff like this.

Sheamus Wants Gold: The Celtic Warrior stated last week in an interview that he has at least 10 years of wrestling ahead of him. With a new-found drive and passion, the former Grand Slam Champion also mentioned he wants the Intercontinental Championship around his waist soon.

Sheamus vs Braun Strowman at WrestleMania 36 could be a very fun match. Strowman is a huge step up from wrestling Shorty G week after week. Sheamus deserves top opponents and Strowman is a top-tier talent who would work well with him. You will see either Sheamus or King Corbin going after the Intercontinental Title for this years WrestleMania.

One of the most-popular segments week after week has been the budding love story between Mandy Rose and Otis. Fans have loved these segments on a regular basis. Slowly, this love story became a very intriguing storyline focusing on if opposites could attract with the eccentric Otis and the stunning Rose.

The inclusion of Dolph Ziggler makes zero sense in that it is another example of WWE creative failing to write a compelling conclusion to storylines. This storyline was unique and fun week after week until now. Can this angle be salvaged? Will Rose and Otis end up together soon as an on-air couple? We will definitely find out more details this week.

Prediction: Otis and Mandy Rose will become an on stage couple. This storyline is an excellent way to have Otis and Mandy get more exposure to the WWE Universe. The payoff down the road will be “The Golden Goddess” turning on Otis and becoming a huge heel character will parlay her into a lead role in the women’s division. Mark my words, Mandy Rose will have gold around her waist by this time next year.

Don’t forget to check out SmackDown Live this week as the superstars of the blue brand will leave it all on the line on the final show before WWE Super ShowDown. You will not want to miss this episode of SmackDown and next weeks Super ShowDown. WrestleMania 36 is six weeks away and these shows will play a huge part in developing the WrestleMania match card.