Los Angeles Angels star Shohei Ohtani is suddenly being floated in MLB trade rumors as his team plummets down the standings and prepares to be sellers at the trade deadline. While a move remains highly unlikely, it appears the door isn’t entirely closed on a blockbuster deal.

Any Ohtani trade would require approval from Angels’ owner Arte Moreno, who will likely heavily weigh the impact of marketability and revenue Ohtani provides for the franchise. It makes a deal by Aug. 2 extremely unlikely, but it appears Los Angeles isn’t shooting down inquiries.

Jon Heyman and Joel Sherman of the New York Post reported Thursday night that the Angels are listening to offers for Ohtani. While it doesn’t suggest he will be moved and many around the league believe it’s extremely unlikely, the willingness to entertain offers is a change in approach.

Ohtani will enter the final year of his contract in 2023 before becoming a free agent and he wants to test the open market. Los Angeles hasn’t made the playoffs since he joined the club and the reigning AL MVP is determined to play for a contender.

Speaking to reporters after Thursday’s game, Ohtani wouldn’t even commit firmly to a desire to remain with the Angels.

“Regardless of where I’m playing, I want to give it my all, try to win the ballgame that’s right in front of me. I’m with the Angels right now. And I’m very thankful for what they’ve done. I really love the team. I love my teammates. Right now I’m an Angel, and that’s all I can really focus on at this point.”

In terms of the Angels’ asking price, an MLB executive told Heyman that the requirement is a team’s top four prospects. Many believe it would take an “eye-popping” package of premium, young talent for Los Angeles to even consider a deal.

While the New York Mets don’t necessarily need a starting pitcher right now, it comes as no surprise they are making a push for the two-way phenom. New York could deploy a six-man rotation, keeping Ohtani, Max Scherzer, Jacob deGrom and Chris Bassitt fresh. A near lock for the MLB playoffs, Ohtani would help form the best postseason rotation in baseball.

Ohtani’s trade value is certainly boosted thanks to his contention for the AL Cy Young Award and his presence as an All-Star bat in the heart of a lineup. However, his plans to test free agency after the 2023 season hurts some of the potential return Los Angeles could receive.

This is still a deal that can work out for both sides. Alvarez is an elite prospect and profiles as a perennial All-Star catcher who can debut for the Angels in 2023. Baty is on the verge of being MLB-ready ready and Tylor Megill provides Los Angeles with a high-upside starter under team control through 2027. With pitching prospect Matt Allan included, this can work out nicely for both clubs. Of course, Mets’ owner Steve Cohen might even be willing to pay Ohtani whatever he wants to sign a long-term deal.

The San Francisco Giants could be one of the most interesting teams to monitor at the MLB trade deadline. Farhan Zaidi will not rebuild, but one of the best executives in MLB might view this time of year as an opportunity to tweak his roster to become a stronger team in 2023.

One intriguing possibility is a three-team trade. San Francisco won’t be winning a World Series this year and Carlos Rodón is headed for free agency. It could set up a scenario where Rodón is traded to a contender for prospects, who are then flipped to Los Angeles for Ohtani.

From Tampa Bay’s perspective, it flips expendable assets in Lowe and infield prospect Carlos Colmenarez to land a co-ace who will line up behind Shane McClanahan. Meanwhile, Los Angeles stocks its farm system with a young outfielder (Lowe), a potential long-term ace (Kyle Harrison) and one of the top-10 prospects in baseball (Luciano). It also gives them a nice buy-low shot on Joey Bart. 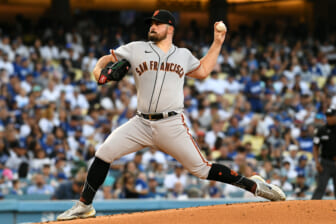 San Francisco pursued Ohtani when he first came over from Japan. He would be the perfect player to market in the Bay Area and he would provide the Giants with an ace in front of Logan Webb and provide much-needed pop in their lineup. Just as important, San Francisco has the payroll flexibility to sign him to a multi-year deal.

The St. Louis Cardinals would love to add Juan Soto to their lineup. With that said, starting pitching is a far greater need. If there’s any team that should be identified as a potential favorite for an Ohtani trade, the Cardinals stand out.

St. Louis boasts the MLB-ready talent that Los Angeles will likely want. More importantly, Ohtani is the only player who can solve several of the Cardinals’ problems. Thanks to outstanding depth in the organization, a deal could also line up nicely.

In this deal, the Cardinals can return to the middle infield duo of Tommy Edman and Paul DeJong. While they sacrifice O’Neill’s long-term value, he is replaced in the lineup with Ohtani and St. Louis has plenty of other options to play the outfield. On the prospect side, Gordon Graceffo and Ivan Herrera serve as the minor-league centerpieces for the Angels.

Any deal for Ohtani is going to come off as an overpay compared to what other players who are eligible for free agency after next season would go for. That’s the price you pay for a two-way phenom who is arguably the most talented player the sport has seen in decades. When you combine Ohtani’s on-field value with what he provides a franchise financially, almost any cost is worth it.