Shaedon Sharpe is the most polarizing prospect in the 2022 NBA Draft. Considered the No. 1 recruit in his class, Sharpe chose to attend the University of Kentucky but didn’t play his freshman season.

Across his high school career and time in the 2021 Nike Elite Youth Basketball League, Sharpe flashed elite athleticism. He skied above the rim, denied shots, made nifty passes and could get to the rim with ease. It’s all a matter of a team putting Sharpe’s talent ahead of him not playing over the last year. Is it worth the risk?

Here are three ideal landing spots for Sharpe relative to where teams are selecting.

3. Shaedon Sharpe to the Houston Rockets

A team that has lived at the bottom of the Western Conference the last two years shouldn’t be closing the door on adding a raw talent. That’s the basis for Houston selecting Sharpe.

Now, the Rockets have a deep backcourt rotation. Jalen Green flashed a multi-faceted offensive skill set in his rookie season. Kevin Porter Jr. has become a plausible playmaker. Jae’Sean Tate and Garrison Mathews have had their moments. At the same time, Sharpe could fit into head coach Stephen Silas’ rotation.

With Green and Porter splitting ball-handling duties, Sharpe can operate and score off the ball. He’ll benefit from the attention that Green and Porter attract in slashing to the rim for easy buckets. Sharpe can gradually come into his own as a scorer in a secondary role while the aforementioned guards blossom themselves. When Sharpe gets his feet beneath him, he gives the Rockets a fast and electric perimeter attack.

All that said, the Rockets may prefer to draft based on need (e.g. Paolo Banchero or Chet Holmgren), as opposed to taking a daring chance on Sharpe with the No. 3 pick.

2. Shaedon Sharpe to the Detroit Pistons

The Pistons need sources of hope, specifically players who will serve as go-to scorers. Sharpe would have every opportunity to become such a player with the Pistons.

Cade Cunningham will be the driving force of head coach Dwane Casey’s offense, creating his own shot, starting the fastbreak and facilitating for his teammates. Sharpe’s athleticism would bode well in-between Cunningham and Saddiq Bey, who are each accustomed to attempting and sinking shots from behind the arc.

Bey stretches the floor while Cunningham handles the rock and occasionally steps out behind the arc. This allows Sharpe to attack the rack and play in isolation. Detroit is an entrenched rebuilding team. Sharpe being an integral source of offense from the jump could be the best way for him to make a complex transition to the NBA. He takes his lumps while holding down a high-minute role in high-leverage situations. This is a baptism by fire deal.

The factor that could stop the Pistons from selecting Sharpe, though, is them preferring to add an immediate contributor to what has been an inauspicious rebuild thus far.

1. Shaedon Sharpe to the Indiana Pacers

The Pacers have a lot going for themselves and likely more compelling pieces on the way in their abrupt retooling effort. This allows them to swing for the fences with Sharpe.

Tyrese Haliburton and Chris Duarte are smooth, perimeter players who are just getting started. An attacking scorer with hops like Sharpe would complement Haliburton and Duarte, who each stretch the floor. While Haliburton may become an All-Star scorer, the Pacers don’t have a true number one scorer in the present. With varying skill sets around him, Sharpe could become the centerpiece of head coach Rick Carlisle’s offense. He gives them offensive variety.

Indiana figures to move at least one, if not two of Malcolm Brogdon, Myles Turner and Buddy Hield this offseason. The Pacers’ return on those players, which likely yields at least a first-round draft pick and/or a budding young player, gives them more transactional flexibility and margin for error.

Sharpe is a tantalizing talent, and the Pacers are in the precise position to roll the dice on that talent. 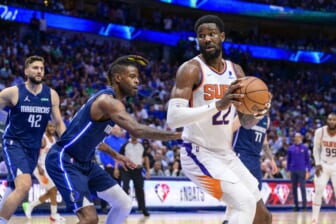