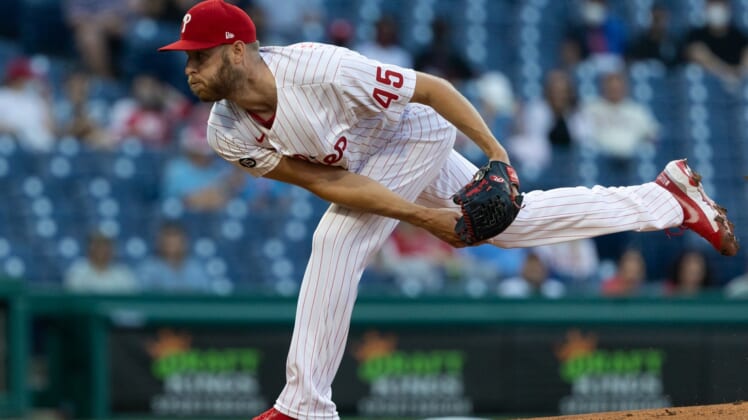 Ronald Torreyes hit a two-run pinch-hit double in the bottom of the eighth inning to lift the host Philadelphia Phillies past the Miami Marlins 8-3 on Tuesday.

Alec Bohm, Rhys Hoskins and Odubel Herrera had two hits each for the Phillies, who scored seven times in the eighth and snapped a two-game losing streak. Bryce Harper added two hits and two RBIs.

The Phillies played without two key regulars in their lineup — Didi Gregorius and J.T. Realmuto. Gregorius landed on the 10-day injured list with inflammation in his right elbow. Realmuto is recovering from a contusion at the base of his left hand.

Phillies starter Zack Wheeler was stellar in seven innings as he allowed five hits and one unearned run. Wheeler struck out 10 and walked none. It was the 10th time in Wheeler’s career that he recorded at least 10 strikeouts.

Jazz Chisholm Jr. homered, singled and drove in two runs for the Marlins.

Marlins starter Cody Poteet was called up from Triple-A Jacksonville to take the mound. Poteet gave up three hits and no runs in five innings while striking out three and walking two.

Chisholm opened the fourth with a single, the first hit against Wheeler, advanced to second on an error and then moved to third when Miguel Rojas singled. The Marlins went ahead 1-0 when Adam Duvall lofted a sacrifice fly to center field, scoring Chisholm.

Harper singled with one out in the sixth and moved to third when Bohm hit a line drive off the wall in right. But Duvall threw out Bohm trying to stretch the play into a double. Herrera grounded out to end the inning.

The Phillies tied the game at 1 in the seventh when Andrew McCutchen hit a deep sacrifice fly to center, scoring Nick Maton.

Chisholm launched a two-run homer off Jose Alvarado in the eighth for a 3-1 Marlins lead.

In the bottom of the eighth, Bohm hit an RBI double to right and Maton later added an RBI single to tie the game before Torreyes’ clutch double.